Wittke sworn in as new chief of Hazlet Police Department 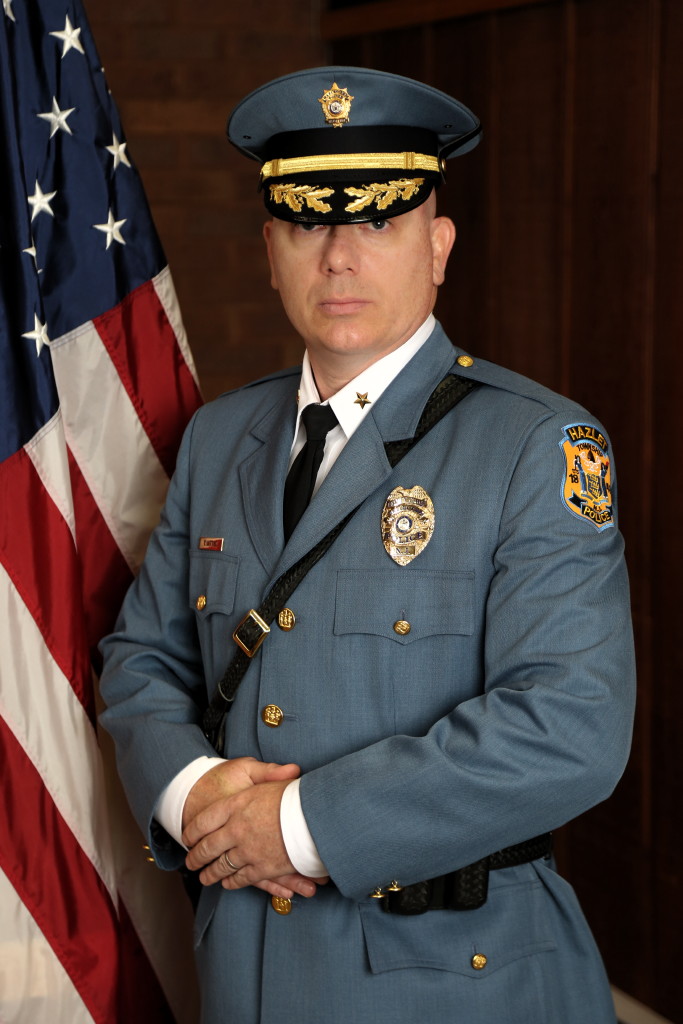 HAZLET – Ted A. Wittke, who began his law enforcement career in February 1999 with the Hazlet Police Department, took the oath of office and became Hazlet’s new police chief on Sept. 8.

It has been Wittke’s goal to become Hazlet’s police chief since he was a teenager and he decided he wanted to enter the field of law enforcement. The new chief, who lives in the township, said he is looking forward to serving the community and providing the services residents need.

“It has been 21 years of hard work to get where I’m at today,” Wittke said in an interview. “I have always wanted to serve this township as police chief. I have a lot of family and friends who reside in the community. To reach the pinnacle of my career feels great.”

Meehan received an honorary sendoff on Aug. 31 from his 43 officers and department members, representatives of Monmouth County law enforcement agencies, professional colleagues, friends, family members and community leaders at a final “walkout” ceremony behind the police station on Middle Road, according to municipal officials.

“It has been an honor to serve Hazlet,” Meehan said as he expressed optimism for the future of the department he was a part of for 23 years. “I have 100% confidence in Ted’s abilities. I think he’s going to continue to move the department in a positive and forward direction. I’m excited for him and his command staff.”

“Our thanks to Police Chief Phil Meehan for his long service to Hazlet, his professionalism and his compassion,” Mayor Michael Glackin said.

Wittke, a U.S. Marine Corps veteran, served as a patrol officer from February 1999 through July 2012, according to the township.

In July 2012, he was promoted to the rank of sergeant and placed in charge of a squad of patrol officers.

In February 2014, Wittke was promoted to the rank of lieutenant and took over as the Detective Bureau commander. In that role he directly oversaw investigations and the internal affairs function of the police department.

In December 2016, he was promoted to the position of deputy chief.

“Chief Meehan is a mentor and a friend of mine,” Wittke said. “When he announced he was leaving, he told me he had full faith in my abilities as a leader to take over as police chief. I am confident in my abilities to take on this position and serve this community.”

Among his accomplishments, in 2001, Wittke was assigned as an undercover officer to the Bayshore Narcotics Task Force and worked on cases involving the sale and distribution of illegal drugs in Monmouth County’s Bayshore area, according to the township.

He implemented the police department’s first field training program for new officers in 2012. The program has been used to effectively train more than 25 officers and is still in use.

While assigned to investigations, Wittke implemented the RAPID metals database to deter the fencing of stolen goods, which made Hazlet police the first Monmouth County department to use this tool, according to the township.

He served as the coordinator for the Law Enforcement Support Office 1033 program and acquired more than $3 million worth of military surplus equipment for Hazlet at no cost.

In July 2018, Wittke attended the FBI National Academy in Quantico, Va. The academy is a 10-week professional course of study for law enforcement executives from around the world.

Wittke is a two-time recipient of the Monmouth County 200 Club Award, and the Narcotics Officers Association Commendation Award, as well as receiving numerous department commendations throughout his career.

The new police chief is aiming to improve communication between the police department and the community.

“Our goal is to provide accurate information to our residents that can improve their safety,” Wittke said. “We want to expand and improve on services based on the needs of our community.”

Wittke is a graduate of Fairleigh Dickinson University where he earned bachelor’s and master’s of administrative science degrees. He is an accredited chief/command executive through the New Jersey Association of Chiefs of Police and he is a certified public manager through Rutgers University.