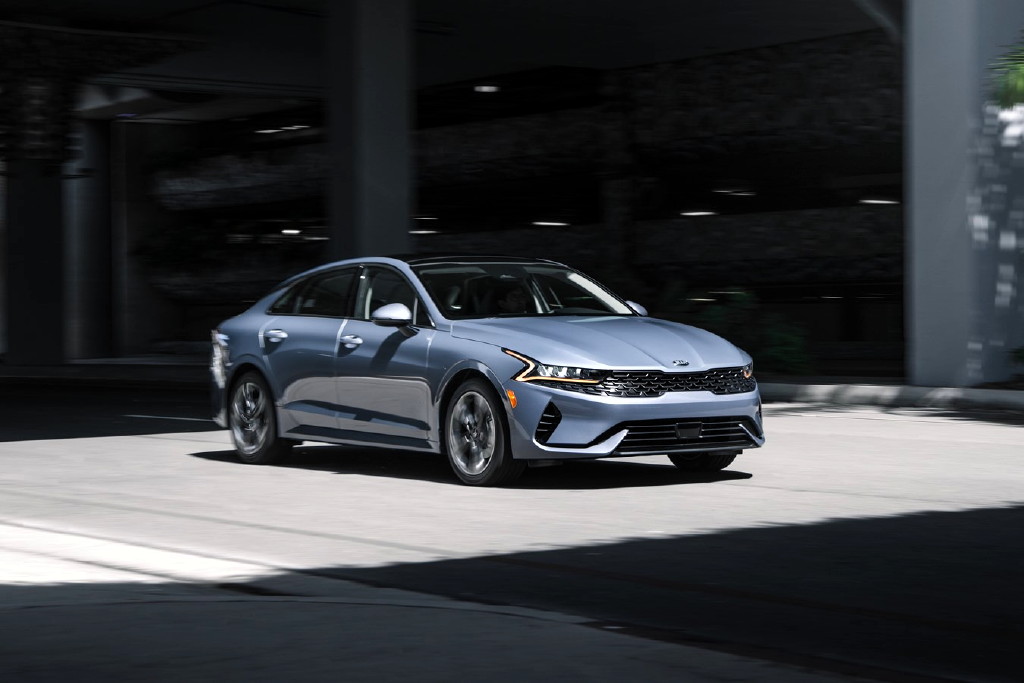 It’s September. Fall is upon us. Time for new beginnings, right?

So, we here at On The Road have an all new car to review for you this week – our first 2021 model, as well.

South Korean auto maker Kia – a fast growing brand in the United States – has introduced an all new model – the 2021 Kia K5, a mid-sized rather upscale sedan that replaces its former Optima model.

I recently had the pleasure of driving this vehicle for one week and came away with an overall positive impression, although there are some things I will nitpick. The K5 model I drove for the week was the EX model that carries a base sticker price of $27,990.

My tester added a $3,400 premium package and $995 for destination and delivery, bringing the grand total sticker price to $32,365.

The overall outside look of this newly designed vehicle is a winner. This sedan has an aggressive and sporty sculpted stance that is capable of turning heads.

“Gorgeous, outside and in,” is what the editors at Car and Driver boasted about the new K5.

I’d have to agree.

Powering the new K5 is a 1.6 liter turbo charged 4 cylinder engine that is coupled with a smooth shifting 8-speed automatic transmission. This engine produces an impressive 180 horsepower and 195 pound feet of torque.

The K5 drives like a more expensive sleek European luxury car, without carrying the high price tag. It’s athletic-able to complete lane changes and passing maneuvers without a hitch. It has enough power to cruise nicely at the higher speeds on the interstate.

In fact, this mid-sized sedan sometimes is going a lot faster than the driver – namely me – realizes at times.

Witness the one afternoon when I was hurrying back from lunch and got pulled over for doing 53 in a 35 mph speed zone. When I explained to the officer that I write car reviews, he let me go with just a warning.

The interior of the K5 is well appointed with a lot of upscale and ergonomically friendly buttons and switches and a fairly responsive touch screen command system.

However, I found the navigation system a bit troublesome. When you attempt to enter a destination address manually, it is very frustrating. There are very few addresses this navigation system seemed to be able to find easily.

The best way around this glitch was for me to enter the general zip code of the destination I was headed to, rather than the exact address.

Once I did that, I then was able to enter the exact address as a midway point along the route and the system was then able to find it. This is way too cumbersome and time consuming.

It probably can be corrected with a simple software upgrade.

This Kia K5 is pretty miserly when it comes to drinking gas, too. It has an EPA fuel consumption rating of 31 miles per gallon overall – 27 in city driving and 37 on the highway.

The EPA estimates that the K5 will cost about on average $1,300 a year for gas as it uses about 3.2 gallons of gas per every 100 miles driven.

This 2021 K5 is too new and hasn’t been tested for the government’s 5 star safety crash test yet.

As far as comfort and roominess go, the K5 passes the test. While it’s not an overly expansive mid-sized sedan it is designed well enough to get in and out of with ease even with its low stance to the ground.

The front and rear leg room is sufficient and the rear seat is fairly roomy as well.

The first 2021 EX comes in front wheel drive only. A four wheel drive version is to be added later this year.

Moreover, later this year, Kia will offer a significantly sportier GT version of the K5 featuring a more powerful engine, a panoramic sunroof and an added all wheel drive option.

As is the case with all Kias, their standard warranty that comes with all of their models is one of the best available on the car market.

While the mid-sized sedan market is fastly shrinking – consumers are more and more going for the crossover and SUV models – if you are in the market for a mid-sized sedan at a reasonable price, the K5 is one to consider.

Peter Perrotta’s On The Road column appears weekly. If you have questions or comments he can be contacted at peter@capitalmotorcars.com