Charges have been filed in two cases police have been investigating: damage to the field at South Brunswick High School and the theft of lawn ornaments from several residents’ lawns.

“The damage to the high school may be over $10,000 and the thefts of items right off homeowners’ front laws left many feeling uneasy. These cases impacted our community and with help from the community and good police work, arrests were made,” Police Chief Raymond Hayducka said in a prepared statement on Sept. 24.

On Sept. 23, South Brunswick police sought the assistance of the public and surrounding law enforcement agencies in identifying the individual who drove his truck on the sports fields at South Brunswick High School, causing thousands of dollars’ worth of damage.

Several residents, along with surrounding law enforcement agencies, provided tips on the identity of the suspect responsible for the damage, according to the statement.

On Sept. 24, in collaboration with surrounding police agencies, a lead was developed. A suspect was identified and located, and a 20-year-old male from North Brunswick was located. He was charged with criminal mischief, a third degree crime due to the amount of damage done to the fields. He was processed and released on a summons with a court date scheduled, according to the statement.

South Brunswick police also announced they have brought to an end the overnight landscaping thefts that had targeted the Kendall Park neighborhoods for the past three weeks, according to the statement.

As these incidents unfolded, several victims took to social media to warn others about the thieves, which, in turn, prompted additional victims to come forward, according to the statement.

As police began to investigate these thefts, video of the actors was obtained from multiple sources, including numerous video doorbells. A description of the actors, a white male and a white female driving a white Ford Explorer Sport Track pickup, was developed, and the suspects were identified, according to the statement.

Shelcusky linked the homes’ occupants, a 35-year-old female and her 51-year-old fiancé, to all of the thefts, according to the allegations. The investigation uncovered that the two would reportedly drive around different neighborhoods and steal lighting, flowers and other landscaping to spruce up their own front lawns, according to reports.

Shelcusky collected all the stolen items and returned them to different homeowners, according to the statement.

Both actors were charged with theft of movable property, a fourth degree offense. They were processed and released on summonses. 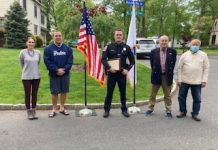