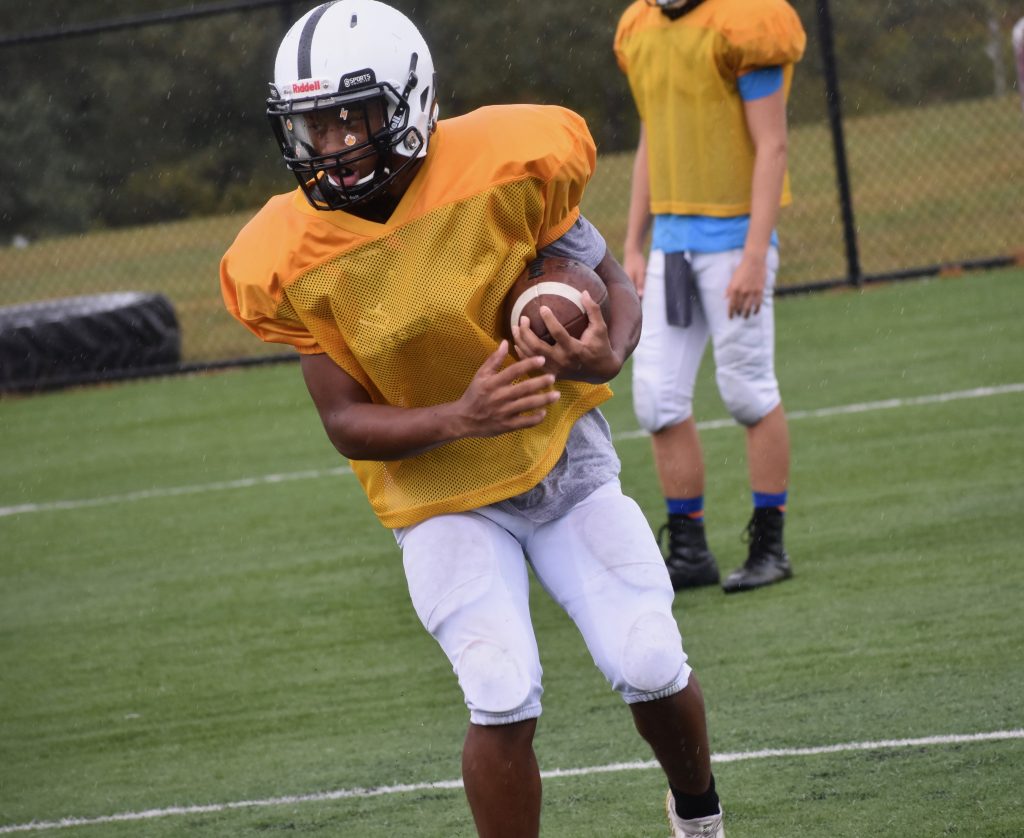 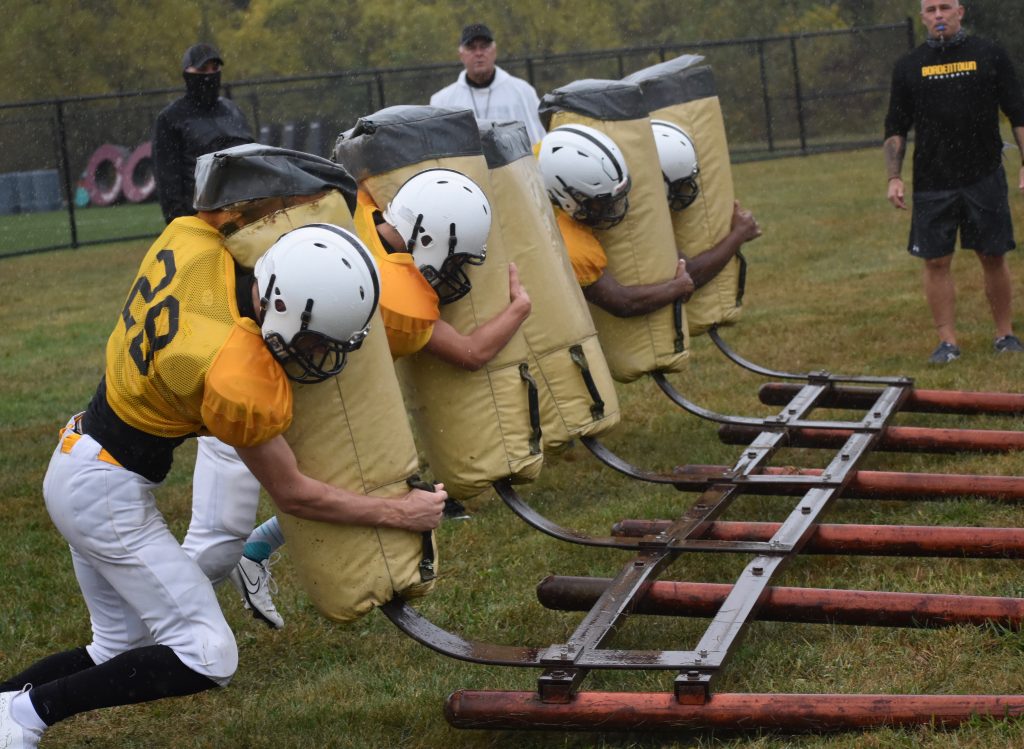 2 / 2
Members of the Bordentown Regional High School football team participate in a sled drill during the team's practice on September 29. Bordentown will travel to play Florence in its season opener on October 2. STEVEN BASSIN/STAFF
× 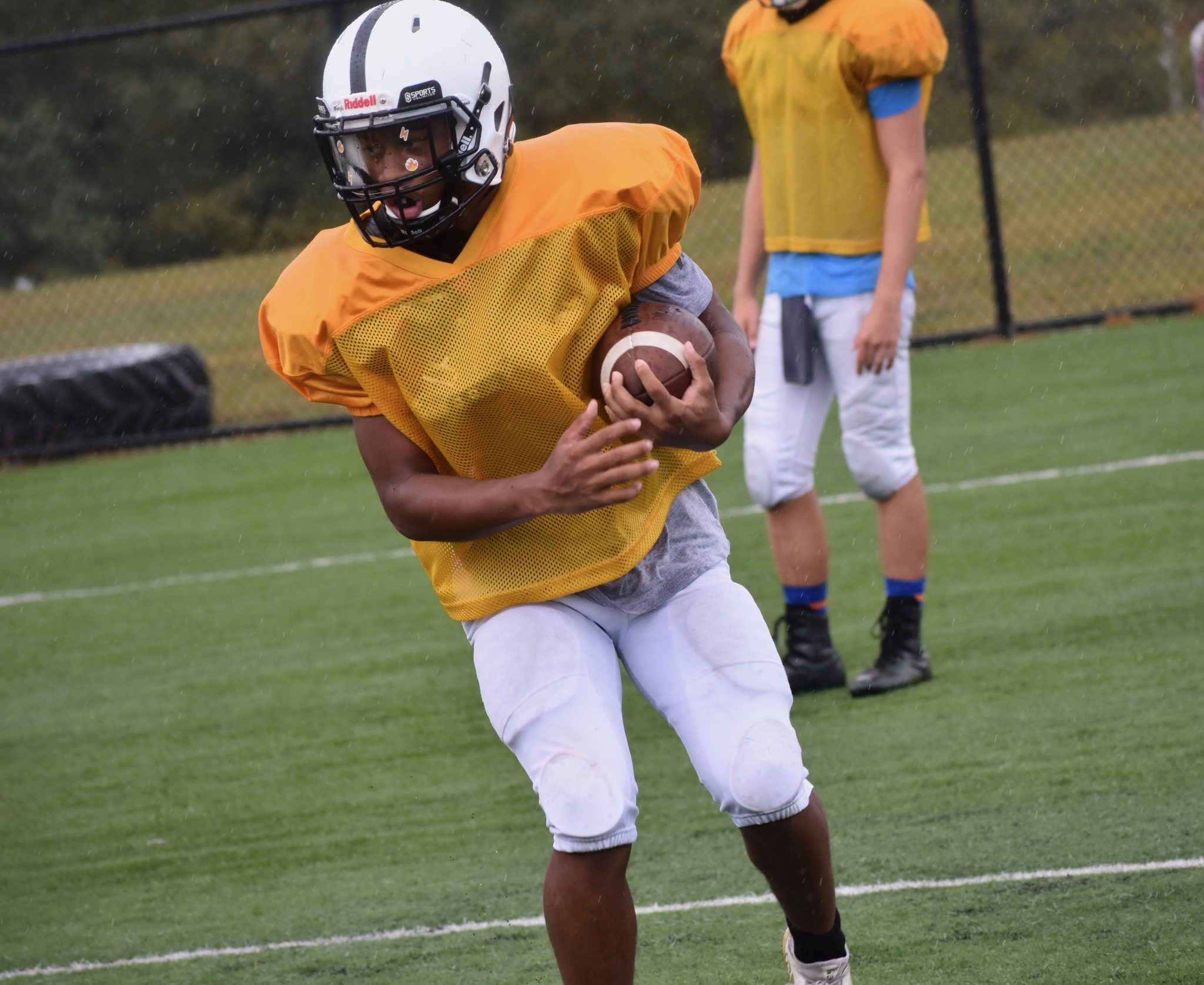 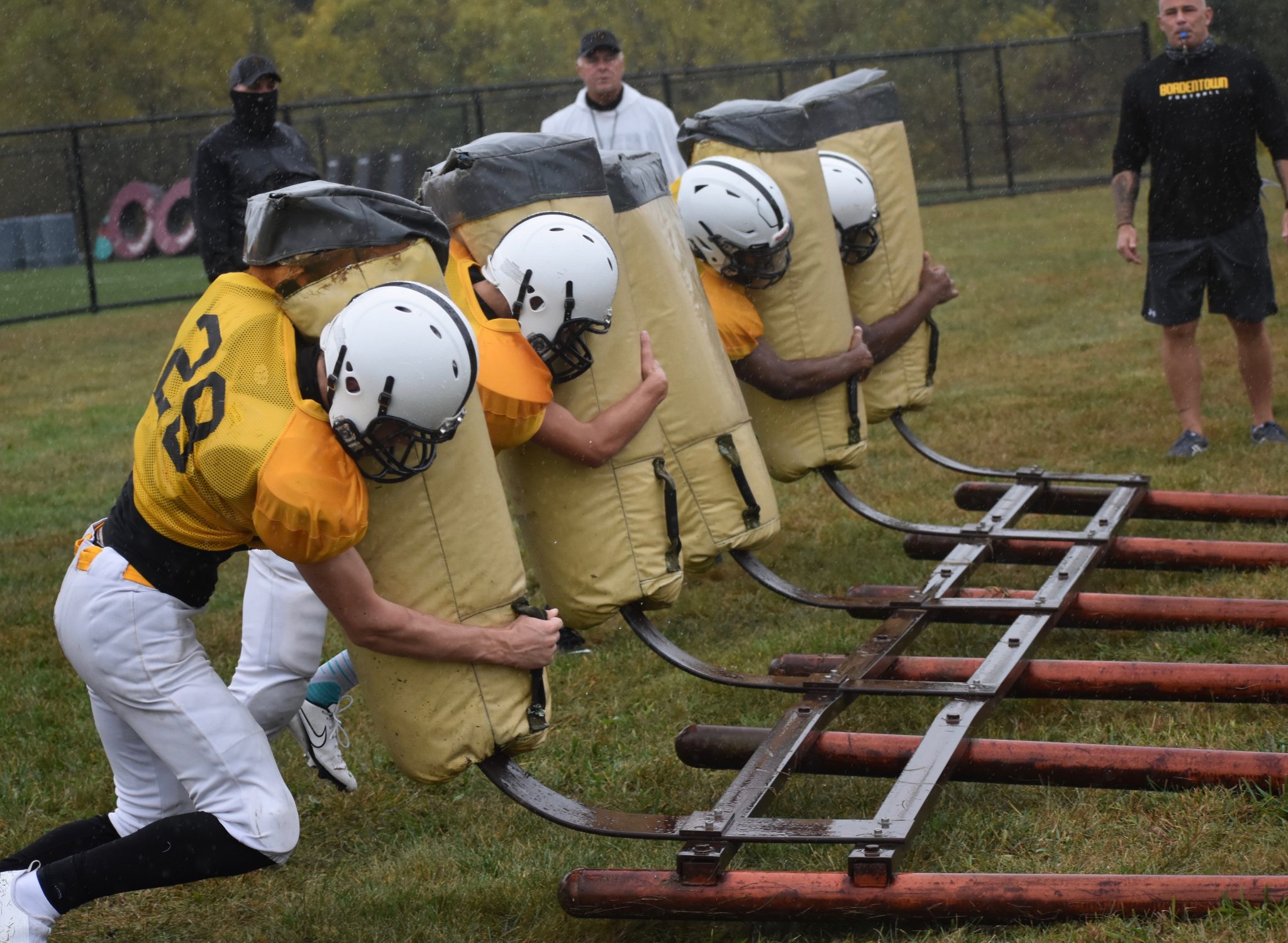 2 / 2
Members of the Bordentown Regional High School football team participate in a sled drill during the team's practice on September 29. Bordentown will travel to play Florence in its season opener on October 2. STEVEN BASSIN/STAFF

The thrills of high school football under the Friday night lights will be back in the State of New Jersey on Oct. 2, and the Bordentown Regional High School football team will be smack dab in the middle of it.

The Scotties open up the 2020 season on the road against Florence Township High School as they look to improve from their 0-10 campaign last year.

A team filled once again with mostly underclassmen at key positions, second-year Coach Skip Edwards believes the experience his young team got last fall will help them this season.

“We have a bunch of young men back that played a lot last year and will be key contributors now as sophomores, juniors and seniors,” Edwards said. “I think we’ve improved. We’re going to take things game by game and hopefully will be competitive in the games we play.”

Sophomore quarterback Denny Morolda is back under center for the Scotties after playing in nine games as a freshman.

Morolda believes having a year under his belt at the varsity level will make a huge difference for him this season as he tries to help Bordentown get in the win column this fall.

The young quarterback showed off his arm on a 39-yard touchdown pass during the team’s scrimmage against Robbinsville High School on Sept. 25.

Edwards had a lot of praise for his young quarterback, calling him a student of the game and said he’s moved into a leadership role as an underclassman.

He also said the hard work Morolda put in during the offseason has shown during training camp.

“This year I realized that I had to step up and be a leader on this team and I think I have done that,” Morolda said. “It’s just so exciting to have everyone back and be back on the field again. Especially with everything going on right now, having football is great.”

Morolda will have a lot of talented young skilled players around him at the running back and wide receiver positions.

Kerry Nicholas, Omari Owes, Isaiah Florence and Dan and Michael Poinsett will all contribute to the team’s running game and passing game out of the backfield.

Nicholas was one of the team’s top rushers last season as a freshman. This offseason, Nicholas worked hard to increase his speed and elusiveness to help him become a better running back.

“This year we have grown more in sync as a unit on offense, defense and special teams,” Nicholas said. “I feel like this year I can really step my game up and help the team win games.”

In the passing game, Morolda will have junior Shane Griffin on the outside at wide receiver, who made some big plays for the Scotties last season.

The Scotties are deep at the tight end position with Trotman Kertes and Brendan Swanson. Both players will play a crucial role in the team’s running and passing game.

Newcomer Hunter Parrish is another player at tight end the coaching staff is looking at, Edwards said. A member of the Bordentown boys basketball squad, Parrish brings size and athleticism that can be very helpful to the Scotties in both phases of their offense.

Senior Andrew Mueller will anchor the middle of the Bordentown offensive line at the center position, while junior Cameron McDuffie will hold down the forte at one of the tackle spots for the Scotties.

It was tough sledding for the Bordentown offense last year, only scoring a combined 57 points in 10 games.

Bordentown will operate under multiple formations and sets this fall and Edwards believes that a second year in the system will help his players execute better.

Both Morolda and Nicholas believe the Bordentown offense will perform much better this season after the work they did as a unit in the offseason.

“The scrimmage showed us that everything we worked on in the offseason and last season all came together,” Morolda said. “We saw a lot of good things and I think it made everyone excited for this season.”

Senior defensive end Jaden Blanding and freshman defensive back Myles Hansford are two newcomers to the team who are expected to make a huge impact on defense for Bordentown.

Blanding played for Bordentown during his freshman and sophomore seasons, but spent last season with Holy Cross Preparatory Academy in Delran.

Being a part of the Bordentown community since he was in kindergarten, Blanding is happy to be back playing for the Scotties and ready to help the program pick up some victories this season.

“It feels good to be home,” Blanding said. “This is a very family based team. Everybody knows each other. I’m back and ready to work.”

Blanding will also be a key contributor to the Bordentown running game as a short yardage back.

The depth of Blanding, Kertes and McDuffie at defensive end will provide the Scotties with a strong defensive line that will also feature Owes, Brian Cruz and Kevin Santana.

Michael Poinsett, Liyu Chen and Lennin Gonzalez will make up the linebacking corp for the Scotties. In the secondary, Hansford will be joined by Ethan McGlone, Arion Owes and Sy’Meer Bennett.

Blanding believes he and his teammates have all the abilities and tools to be a successful defense this fall.

Edwards was very pleased with how his defense played in the scrimmage against Robbinsville.

Going through an offseason unlike anything else because of the coronavirus pandemic, Edwards commends his players for all the hard work they have put in to get ready for the season and his veteran coaching staff to coach the team up the best they could under the circumstances.

The second-year coach admits it’s been difficult the past few weeks trying to cram in six weeks of work into two, but says the team has been able to accomplish a lot in the time span.

He believes it’s due to the positive attitude his coaching staff has helped instill into the team. It has also helped the players handle all the situations they are in with handling school and football during a pandemic.

“They have risen to the occasion and have done a good job,” Edwards said of his players. “The kids come out here every day and are willing to go to work and to do what needs to be done.”