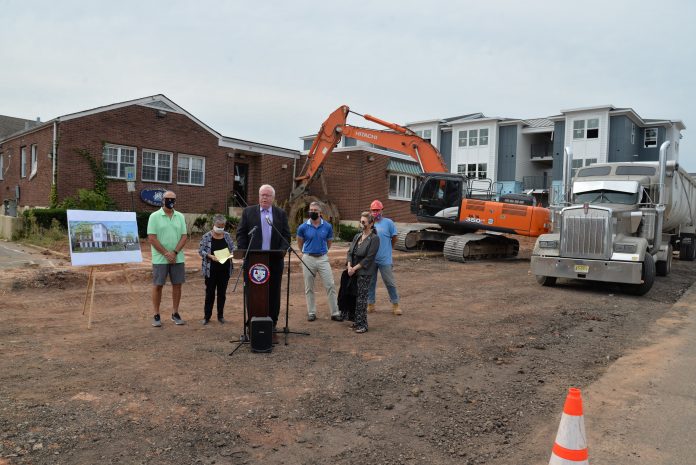 WOODBRIDGE — The area on Bunns Lane, soon to be Veterans Way, in Woodbridge has become an area where no one wanted to live to an area with a waiting list of people eager to move in.

“Through the [Woodbridge] Housing Authority with a lot of financing help and a whole lot of partners, we managed to turn 150 very old unattractive units … into 204 absolutely stunning beautiful units for residents, many people who have lived here and many new people,” Mayor John E. McCormac said.

“Today’s announcement represents yet another milestone toward achieving our goal of ensuring that Woodbridge Township residents have access to quality residential options that allow them to affordably continue to live in the Woodbridge community,” he said. “It is important to note that no taxpayer funds have been used to construct Jacobs Landing. The entire project is funded through federal and state grants, housing development programs and private investment.”

Staff of the Woodbridge Housing Authority and residents of the Jacob’s Landing residential community were in attendance. Caroline Ehrlich, executive director of the Woodbridge Redevelopment Agency, who was also instrumental in the project, was not present at the announcement.

The Jacob’s Landing Residential Community transformed the Woodbridge Garden Apartments – an outdated 150-unit public housing complex constructed in 1952 – into a $56.7 million vibrant new community of 204 units of residential affordable housing. Phase I construction, located at the northern portion of the property, got underway in mid-2017 and opened in April 2018 with 84 units – 18 one-bedroom, 42 two-bedroom, 21 three-bedroom and three four-bedroom apartments in seven three-story buildings. Phase I also included the community building and management offices.

Phase II, located at the southern end of the site, opened in mid-2019 with another 60 units. Phase III, when completed in early 2021, will consist of 60 residential units.

“Construction started in 2016, but we started working on the project 20 years ago when the mayor told me at the time he was [township] business administrator this was a very important project for him, to redevelop the Bunns Lane public housing complex,” Morgan said. “It just took us a long time to raise financing for this project. We broke ground in 2016 and today we knock down the last of the old buildings.”

The entire community offers residents ample parking, community space and community social services including mental health counseling, substance abuse programs and a host of medical and legal advocacy services. All of the apartments feature spacious layouts, oversized windows, HVAC (heating, ventilation and air conditioning) systems, tile in the kitchen and foyer, ceramic tile baths, vinyl floors in the living rooms and wall-to-wall carpeting throughout the remainder. Kitchens will feature a full appliance package including a dishwasher and a garbage disposal. There will be both fully accessible and adaptable units, as well as fully-furnished supportive housing units in the community.

Jacobs Landing was made possible via a creative and unique public/private partnership with financing provided through a combination of equity from the syndication of the Low Income Housing Tax Credits from the New Jersey Housing and Mortgage Finance Agency (NJHMFA), transferred reserves from the Woodbridge Housing Authority, an Affordable Housing Trust Fund contribution from the Woodbridge Affordable Housing Corporation, HOME funds from Middlesex County and a permanent mortgage from the NJHMFA. No municipal or taxpayer funds were used to construct Jacobs Landing.

McCormac said the administrations of former Gov. Chris Christie, who was present when township officials broke ground in 2016, and now Gov. Phil Murphy have been instrumental in helping move the project along.

The transformation of Bunns Lane is a project that started with a vision two decades ago. Brightman said it was her goal to have the project completed and her dream will come true next spring when construction of Phase III is expected to finish.

“It may seem like a long time, but it was certainly worth the wait,” she said.

Jacobs Landing is named after retired U.S. Army Col. Jack Jacobs, who was a Woodbridge hero in the Vietnam War. Jacobs is a 1962 graduate of Woodbridge High School. He served two tours of duty in the Vietnam War and was awarded the Medal of Honor. He received two Silver Stars, three Bronze Stars and two Purple Hearts.