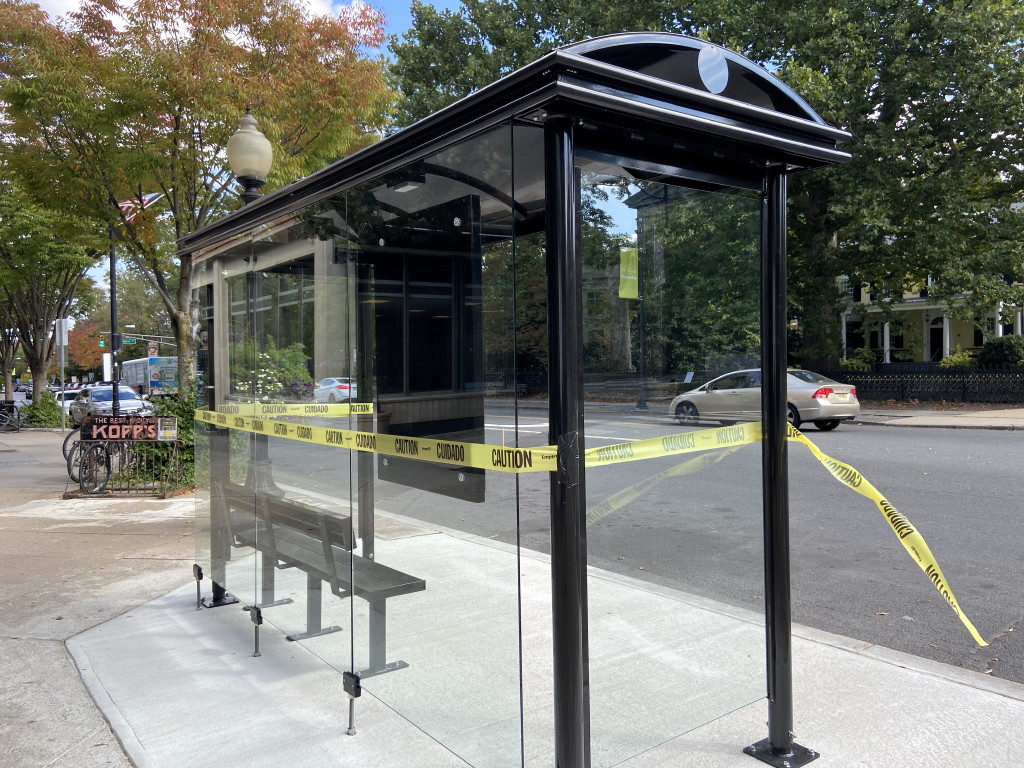 In spite of being stressed and overwhelmed with COVID related problems, Princeton officials remembered to give me a gift that has been 40 years in the making. Wrapped in construction tape on Palmer Square, it is on display for everyone to see – and use.

After decades of my whining about the need for bus shelters in Princeton, the town last week installed the crown jewel of the town’s bus shelter family on Palmer Square. My bus shelter quest, which traveled a long, winding and frustrating road has finally come to an end. And I give a big virtual high five and hug to Princeton Municipal Engineer Deanna Stockton and her staff for making it happen.

In my various roles since 1980 as writer, editor, managing editor, and columnist for The Princeton Packet newspaper, I have used the platform to advocate for bus shelters in Princeton. I am not only a fan of using one’s legs and mass transit for transportation, but also a fan of treating all people, including people who take buses, in a respectful and dignified fashion. Although I do have a car, I often would choose to take a bus to work or shopping just to reduce my carbon footprint. I would travel, however, with other individuals who, for the most part, had no choice. They had to take a bus because they had no access to a car. Waiting in the cold, rain, snow, and wind, I would bristle at the fact that the people in dry, warm cars going past the bus stops were often the same people who brushed off my request for bus shelter installation in Princeton. The reasons were usually the cost, the aesthetic (would they conform to the Princeton style and who would clean them?), Princeton Borough/Township pre-consolidation squabbles, and alternative uses, such as serving as a hangout for the homeless.

Then one day, about seven years ago, the fairy Godmother of mass transit intervened. Also known as the mayor of the newly consolidated Princeton, Liz Lempert, who apparently had listened to my rants, asked me to serve on the Princeton Traffic and Transportation Committee. I never failed to bring up my bus shelter issue at every meeting. Thanks to the excellent work from Princeton municipal staff, I learned that NJ Transit had gotten federal funding for installation of free shelters throughout the state. Princeton working with Transit on the appropriate locations prepared the “pads” for the shelters and in a fairly efficient manner, Princeton soon installed more than a half-dozen new bus shelters. I committed to a custodial role – Windexing the shelters’ windows, whenever I could, and removing illegally posted advertisements. The most annoying flier taped on a brand new shelter wall was the one advertising a cleaning service.

Once the free NJ Transit shelters (all with solar powered lighting) were installed, there was only one remaining bus shelter hurdle – the one on Palmer Square. The members of the Traffic and Transportation Committee determined that The Palmer Square shelter should be a sexier, more luxurious version (larger, sleeker, more glass) of the standard NJ Transit shelter, because the location was so iconic.

To install a shelter on the Palmer Square location, we needed money for both a design consultant and the purchase of the actual shelter, because NJ Transit would not pay for anything other than its standard shelter. The committee members determined that a logical source of funding for the Palmer Square bus shelter would be the Transit Trust Fund, Princeton University money donated to the town, as part of the settlement of a town/gown battle over the university’s Arts and Transit development. Its funds were designated for transit-related projects only. I volunteered to write the shelter proposal, which the Transit Fund trustees approved. Consultant Jim Constantine and his Princeton-based Looney Ricks Kiss (LRK Associates) – particularly Michael Yaffe – were brought on board. The committee liked the work of LRK, we came to a decision about design, secured the funding, and I thought we were home free. But alas nothing happened.

The committee disbanded a few years ago, but I occasionally would ask about the status of the Palmer Square bus shelter. “It is in the works,” I was told – and I figured Princeton residents would be flying on personal transport units before we ever would see a bus shelter on Palmer Square.

So you can imagine my shock when early one morning two weeks ago, a bus shelter appeared on Palmer Square. Was it real or was it a hologram? No one was sitting in it, because, as one bus rider told me people are afraid to sit inside the shelter. “It is not safe, there is still construction tape around it,” said the bus rider.

Was this a COVID restriction (I do not think Gov. Murphy banned bus shelters) or structural? I asked Deanna Stockton, who noted that it was “sort of structural.” The glass walls of the shelter are so clean and transparent, that a pedestrian actually walked into the side of the shelter. “We have to now figure out some sort of marking on the glass even just a frosted glass strip or decal in the middle of the glass wall,” Deanna said.

In the meantime, how about wrapping the shelter in a green ribbon and bow. (Green is Princeton’s logo color and the color of environmental sustainability.) The frost glass strip when installed should say “thank you” to the town for installing the shelter, to the university for providing the funds, and to the people who ride the busses. They generally are the workers who have to get to their “essential” jobs in this pandemic and deserve a huge thank you.