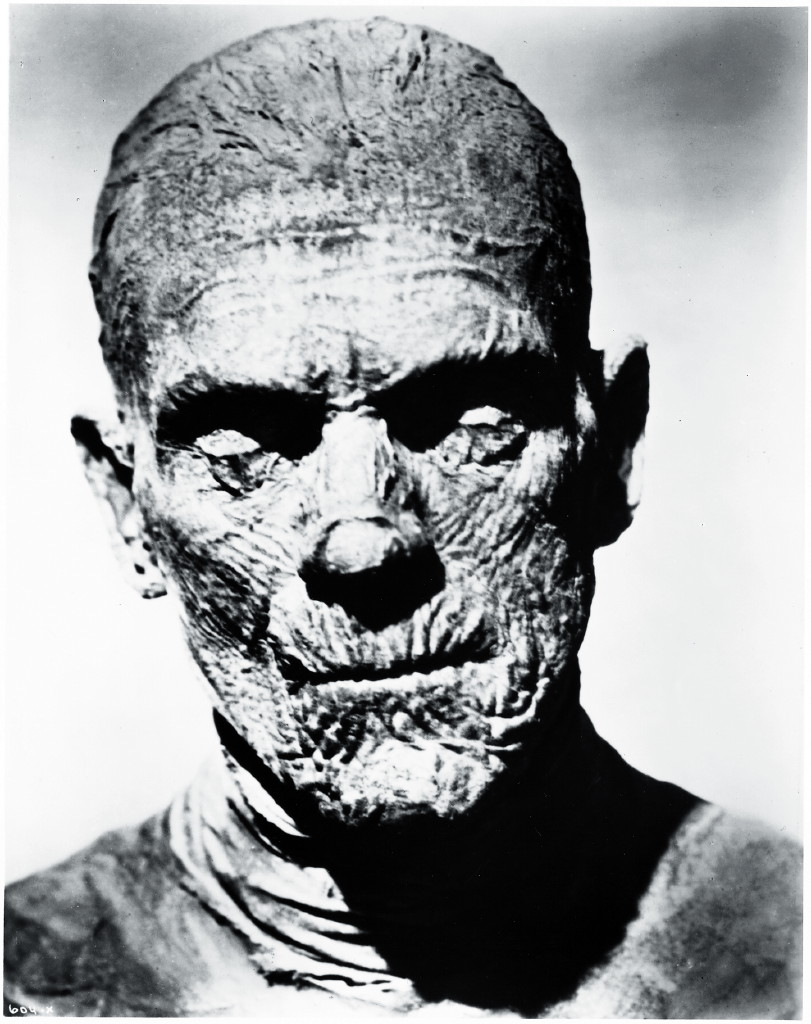 The Legendary Monster Has Been A Cinematic Staple For Nearly A Century.
By Jeff Pfeiffer, ReMIND Magazine

Along with the scientific and historical knowledge that archaeologist Howard Carter’s unearthing of King Tutankhamun’s Egyptian tomb in 1922-23 revealed, the discovery also had a huge impact on pop culture. It wasn’t long after the tomb was opened that, like an unleashed curse, tales inspired by one of ancient Egypt’s most mysterious practices — mummification of the dead — swept across movie theaters and people’s imaginations in the form of a classic monster.

Stories featuring living mummies were not unheard of in literature before this time, but the age of motion pictures that was getting into full swing around the time of Carter’s discovery really brought the undead creature into the hearts and minds of audiences as filmmakers excavated mystery, romance and horror from the idea of a mummy returning for revenge or to reclaim a lost love.

The Classic Universal Era
The classic standard for mummy movies was set early on, not long after the discovery of King Tut’s resting place. In 1932, Universal Pictures released The Mummy, which quickly joined the legendary ranks of the studio’s previous two monster movies, 1931’s Dracula and Frankenstein. Boris Karloff, who had gained fame as Frankenstein’s monster a year earlier, also took on the mantle (and the equally memorable Jack Pierce makeup effects) of the mummy, named Imhotep.

Imhotep was an ancient Egyptian prince whose mummified remains are discovered by archaeologists. When the words of a mystical scroll are read aloud in Imhotep’s presence, the mummy inadvertently is brought back to life. He eventually ditches his millennia-old wraps to disguise himself as a wealthy man and search for his lost love, who he believes has been reincarnated in the form of a beautiful modern woman.

The film is fairly slow-moving by today’s standards, and Karloff is not in the classic mummy-wrap makeup for much of the film (though his character still has a general oddness about him). But director Karl Freund creates terrific atmosphere — especially near the beginning, after the poor guy who reads the words that give Imhotep life goes instantly mad and is overcome with insane laughter once he sees the mummy slowly begin to shamble out of his tomb.

Surprisingly, Universal did not make any more mummy movies until the 1940s, and by then, they had moved on from Imhotep and instead focused on the character of Kharis the mummy, who had a similar backstory. The Kharis films began in 1940 with The Mummy’s Hand, in which the character was played by Tom Tyler. Lon Chaney Jr., who also became famous as the Wolf Man around this time, played Kharis in the follow-up films The Mummy’s Tomb (1942), The Mummy’s Ghost (1944) and The Mummy’s Curse (1944).

Hammer Revival
As it had done with the characters of Dracula and Frankenstein’s monster, Britain’s Hammer Film Productions also resurrected the mummy. The “Hammer horror” formula reintroduced the monster for a newer era of color film and looser standards that allowed for more outright horror, including more overt violence and blood.

Famed Hammer staples Christopher Lee and Peter Cushing headlined the studio’s first mummy feature in 1959 with The Mummy, in which Lee played Kharis. Hammer produced lesser, non-related follow-ups in subsequent years: The Curse of the Mummy’s Tomb (1964), The Mummy’s Shroud (1967) and Blood From the Mummy’s Tomb (1971). The latter film is notable in that it did not actually feature a shrouded mummy, but rather a reincarnated Egyptian queen, who was likely one of the first female villains in a mummy movie.

The Mummy Meets The 21st Century
By and large, the mummy was put back in the tomb when it came to horror movies during the last few decades of the 20th century. Audiences used to aliens, slashers and other modern-day monsters did not seem too frightened by a slow-moving, easy-to-kill, dusty old creature.

But that changed as a new century dawned. In 1999, Universal reclaimed its classic character in a fun and scary remake of The Mummy, directed by Stephen Sommers and starring Brendan Fraser and Rachel Weisz, with Arnold Vosloo taking on Karloff’s role of Imhotep.

For the first time, thanks to advances in CGI effects, a movie mummy was fast-moving and difficult to battle. This brilliantly evil creature was also more horrific than previous incarnations, as he graphically sucked the life out of his victims while trying to restore life to his lost love. The film successfully blended old mummy movie plot points with new technology to create the template for a truly modern mummy movie.

Sommers’ 2001 sequel, The Mummy Returns, again featured Imhotep but wasn’t quite as successful. A third film, The Mummy: Tomb of the Dragon Emperor (2008), refreshingly realized that other ancient cultures besides Egypt practiced mummification, so here, Fraser’s character battled a resurrected Chinese mummy/warrior. Beyond that setup, it wasn’t a particularly well-done film, and it effectively ended that particular franchise.

In 2017, Universal brought the mummy back yet again as the intended start to a shared cinematic “Dark Universe” featuring reimagined versions of their classic monsters. Unfortunately, The Mummy, an ill-conceived film starring Tom Cruise and Sofia Boutella, was not well received with critics or with audiences.

So, as a movie character, the mummy has been put under wraps again, for now. But as we’ve seen, nothing — not time, tombs, deep desert sands or changing tastes among moviegoers — can keep a good mummy down forever.

Will the networks plan out their shows better?