RUMSON – The owner of a Rumson jewelry store who was charged with theft in September is now facing additional charges after 11 additional individuals came forward to report being victimized.

The additional individuals said the jeweler failed to return jewelry totaling about $300,000 that was left at his store on consignment, for redesign, or for repair, Monmouth County Prosecutor Christopher J. Gramiccioni announced on Oct. 15.

On Oct. 13, Anthony Goltsch, of Manchester Township, the owner of the Golden Goose jewelry store, 7 W. River Road, Rumson, was charged with another count of second degree theft by failure to make required disposition of property received, according to a press release from the Monmouth County Prosecutor’s Office.

Goltsch is now charged with the theft of jewelry valued at approximately $560,000, according to the press release.

• Victim 1 consigned a ring with an appraised value of $45,000 to Goltsch in April 2019. The individual has not received any payment for the ring and has attempted to get the ring back on numerous occasions, but Goltsch has not returned or paid the victim for the ring.

• Victim 2 gave Goltsch a large quantity of sterling silver jewelry to melt in November 2015. The jewelry has an estimated value of between $5,000 and $10,000, but the individual has to date not received payment from Goltsch.

• Victim 3 consigned a watch with an estimated value of $1,800 in July 2019. The individual has not received any payment for the watch and has attempted to get the watch back on numerous occasions, but Goltsch has not returned or paid for the watch.

• Victim 4 paid Goltsch a deposit of $6,900 for a ring in June 2020. Goltsch did not deliver the ring, but the victim was able to reverse the charge on his credit card.

• Victim 5 paid Goltsch $34,500 for a watch between March and June 2018. The watch was
never delivered by Goltsch and he has refused to refund the money.

• Victim 6 paid Goltsch a total of $98,704 between November 2019 and February 2020 for gold coins and silver coins. The individual has not received the coins despite numerous follow-ups with Goltsch.

• Victim 7, who is a jewelry dealer, provided diamonds on at least eight occasions to Goltsch to sell between April 2018 and June 2019. Despite numerous requests for payment or a return of the diamonds, Goltsch failed to pay or make a return. The total amount of the theft for this individual is $98,500.

• Victim 8 in March 2019 gave earrings to Goltsch for repairs. Despite requests made to Goltsch, he has refused to return the items valued at between $700 and $1,000.

• Victim 9 turned over to Goltsch in June 2019 assorted gold jewelry for melting. To date, the individual has not received payment for the gold jewelry that is valued at approximately $3,500.

• Victim 10 gave Goltsch assorted jewelry valued at approximately $10,000 on consignment in September 2019. The individual followed up with Goltsch, but to date has not received payment for the assorted jewelry and Goltsch has refused to return the jewelry.

A joint investigation by the Monmouth County Prosecutor’s Office and the Rumson Police
Department initially uncovered three individuals who have failed to receive any payment from Goltsch or a return of the items involved, according to the press release.

After the initial charge of second degree theft by failure to make required disposition of property received against Goltsch was reported, the 11 additional individuals stepped forward to detail how they had allegedly fallen victim to his crimes.

A total of 14 victims have been identified and more could be forthcoming, according to the press release from Gramiccioni.

Anyone with information regarding the Golden Goose is asked to contact Detective Michael
Acquaviva of the Monmouth County Prosecutor’s Office Financial Crimes Unit at 732-431-7160, ext. 2233, or Rumson Police Detective Donald Schneider at 732-842-0500.

If convicted of the theft charge, Goltsch faces a sentence of five to 10 years in state prison on each count, according to the press release. 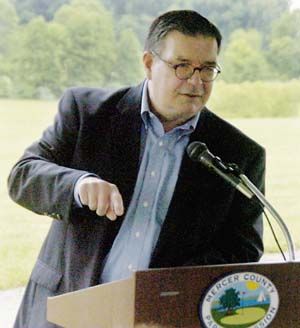