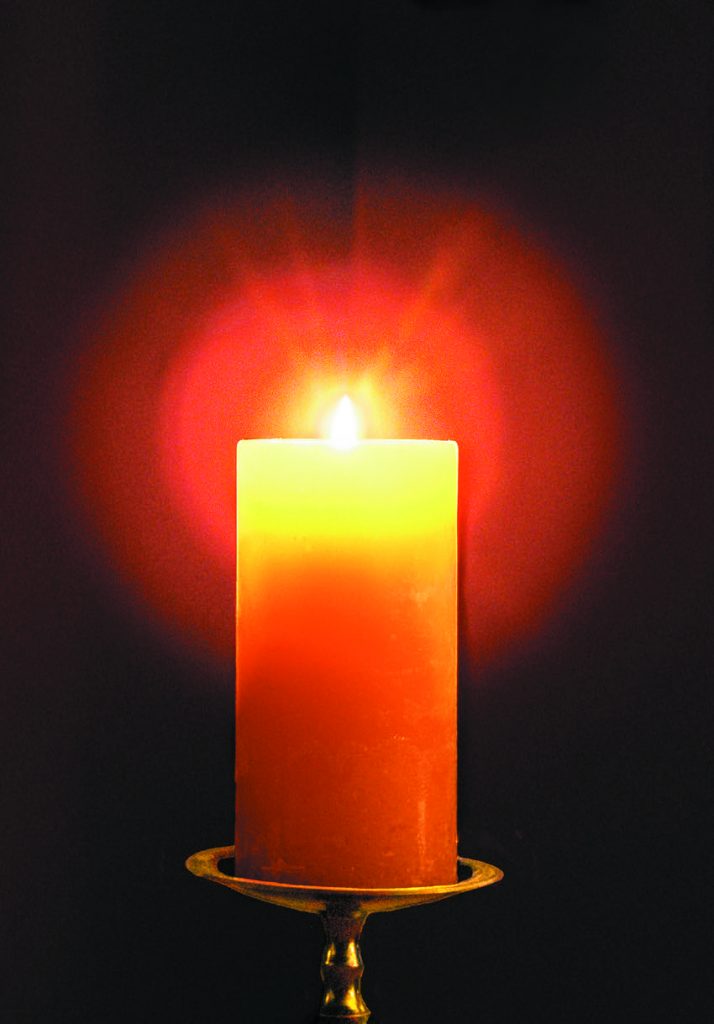 Those were some of the names and messages that were carefully written on a poster  – “To the ones we love” – spread out on the picnic table at the Community Candlelight Vigil held Oct. 18 at Village Park.

On a bench in front of the picnic table, there was a poster that said “Lawrence Township Community Candlelight Vigil.” It was surrounded by floral arrangements. Someone had carved the word “Vote” into the pumpkin next to the flowers.

About 100 people turned out for the vigil – masked and socially distanced – organized by Kyla Allen and co-sponsored by the Black Solidarity Group, the League of Women Voters of Lawrence Township, The Presbyterian Church of Lawrenceville and Lawrence Citizen Activists.

Allen organized the vigil as a means to deal with loss, a theme that was carried out in many speakers’ remark, including her own. Allen was 15 years old when she lost her mother to breast cancer.

“I know what grief feels like and so with everything that has happened so far this year, I want to provide a safe space to heal and uplift the Lawrence community,” Allen said. She thanked the attendees, many holding candles, for taking a moment “to honor those we have lost this year.”

On a personal note, Allen said her mother worked hard to educate people about breast cancer. The Lawrence High School graduate said she intends to carry out her mother’s work and continue the outreach efforts.

Zora Holness, a Lawrence High School graduate who belongs to the Black Solidarity Group, said there have been “terrific losses” this year, including the 210,000 people who have died so far of COVID-19.

Holness also pointed to the many Black people who have died at the hands of police officers, as well as prominent figures – such as civil rights leader John Lewis, basketball star Kobe Bryant, U.S. Supreme Court Justice Ruth Bader Ginsberg and actor Chadwick Boseman – who also died this year.

“This event is for the community. We are a community. Neighbors are there to make sure you are okay. The Black Solidary Group supports the people who live in your community,” Holness said.

Jordan Johnson, who is a Princeton High School sophomore, mourned the impacts of COVID-19 on his way of life, his hopes and his dreams. He was supposed to get his first summer job, but it fell through because of the virus.

COVID-19 impacted his whole year, Jordan said. He had to learn from home when the schools were closed, and he was “pretty upset” about having to stay home. He said he loved being out and doing errands.

“One thing we can all agree on. (This year) was hard, but we are together,” he said.

Nyjah Smarr, who attends The Peddie School in Hightstown, quoted President Donald J. Trump who, after contracting COVID-19 and recovering, urged people not to let it dominate them or to be afraid of it.

“I wish the coronavirus was that simple,” Nyjah said.

“Unfortunately, coronavirus is not the only thing I am afraid of during this pandemic. I fear for Black lives around the world, the mental health of those around me and the future of our country due to the president’s negligence,” she said.

Nyjah said that as a Black student in a predominantly white private school, she struggled to share her fears with her classmates. She said her teachers cared more about her homework than about her mental health. No one asked how she was feeling or what they could do to help her, she said.

Nyjah said she watched her white friends travel everywhere, while she sat at home and worried about her brother’s physical safety as a Black male. During quarantine, she said, her Snapchat account was filled with group selfies posted by her classmates.

“The virus pointed out people’s selfish ways and revealed America’s true colors. People would rather have a good time than save lives,” she said.

When Black people were on the front lines protesting for their human rights, few people acknowledged Black lives, she said.

Nyjah said she gained an appreciation for how Black people came together to stand up for their rights, and that no matter how tough things get, “there is nothing that can defeat Black people.”

Barbara Morey, who has lived in Lawrence for 75 years, said that “when you are in my age group, you may know someone who had COVID-19.”

Morey related the story of two friends – a man and his wife – who contracted COVID-19. They were both put on ventilators. While he was on the ventilator, his wife died, Morey said.

“My heart ached. The first news he hears (after coming off the ventilator) is that his wife died. COVID-19 is very serious. Pray up, mask up and stay up,” Morey said.

Ellen Maak, a member of the League of Women Voters of Lawrence Township, said that during the COVID-19 pandemic, the need for mental health services “exploded.”

“If you see someone with a tear in their eyes, ask about them. There are people out there who are suffering,” Maak said.

“Look out for each other. Stay safe and stay strong. We are a community, and everybody counts,” Maak said.