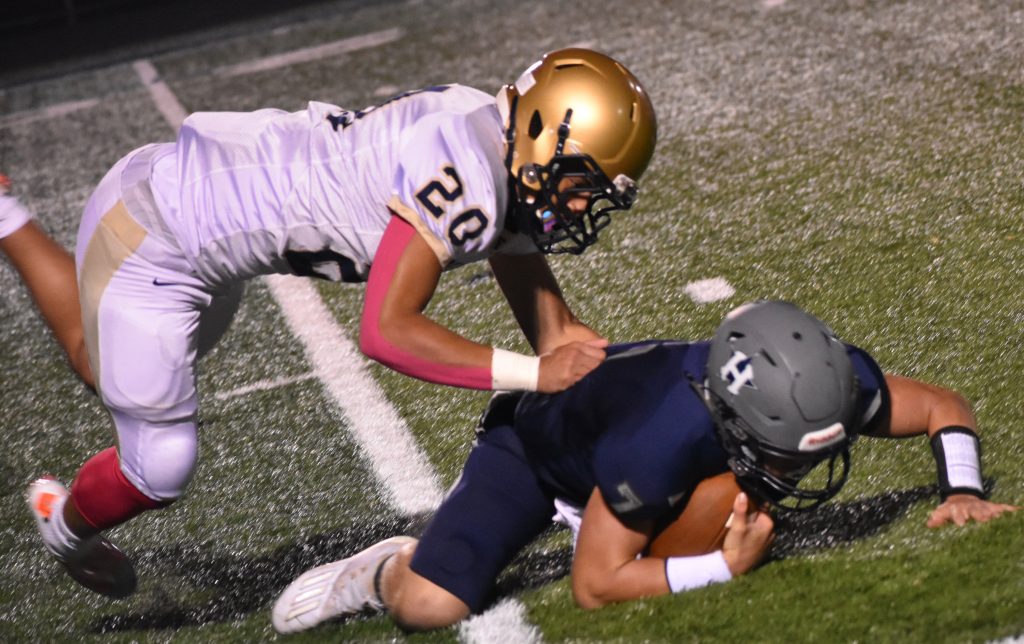 Freehold High School outside linebacker Cameron Crooms sacks Howell quarterback JT Goodman during a game played on Oct. 23 in Farmingdale. Freehold defeated Howell 33-13 to improve to 3-1 on the season.STEVEN BASSIN/STAFF
× 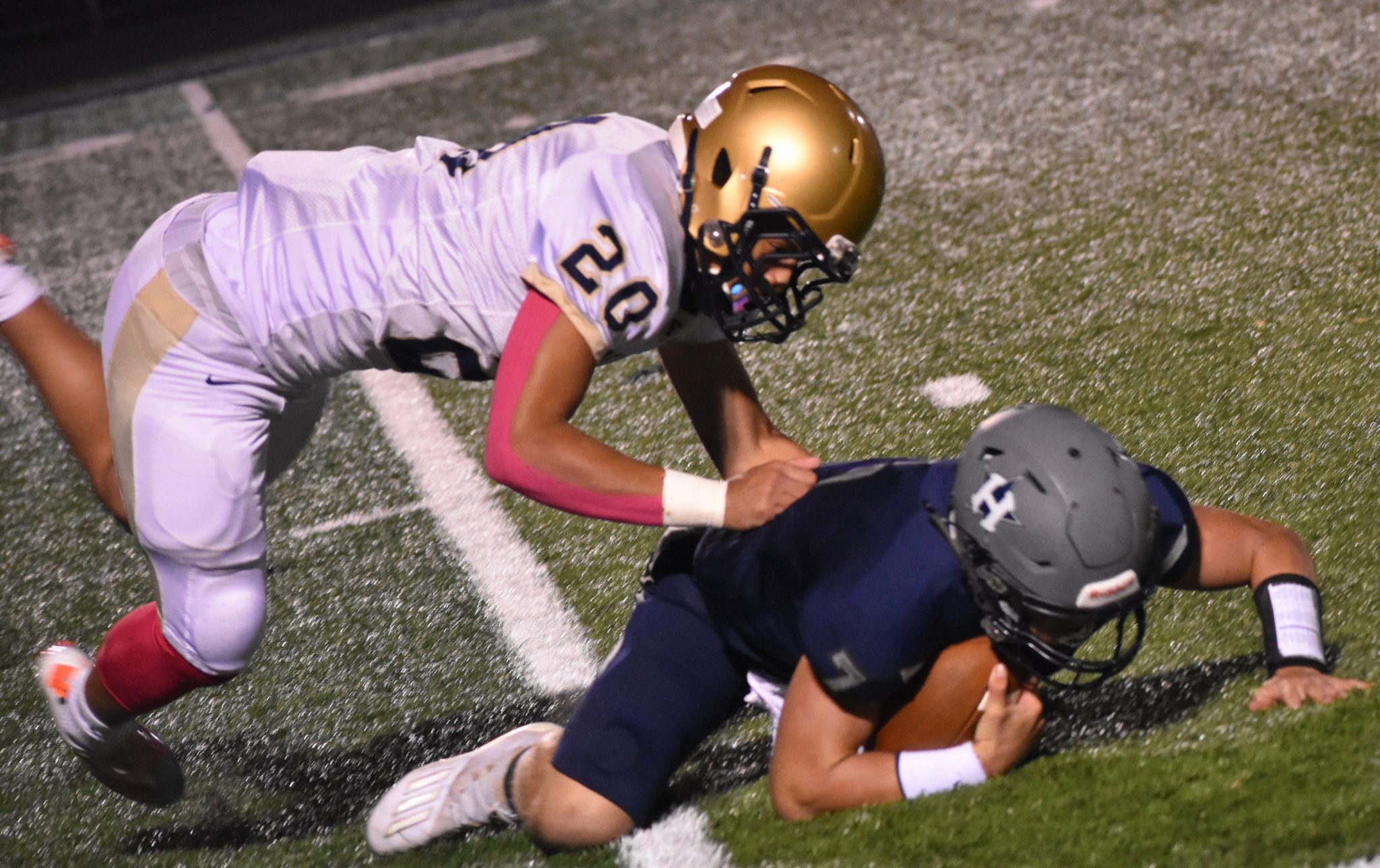 Freehold High School outside linebacker Cameron Crooms sacks Howell quarterback JT Goodman during a game played on Oct. 23 in Farmingdale. Freehold defeated Howell 33-13 to improve to 3-1 on the season.STEVEN BASSIN/STAFF

HOWELL – It felt strange for Dave Ellis to be on the sideline coaching his Freehold High School football team when the Colonials suited up against Howell High School on Oct. 23.

Freehold’s 10th year coach had been away from his team all week after his sister-in-law died of a heart attack at the age of 50.

“This was the hardest game I have ever coached,” Ellis said. “I didn’t feel like I knew my team. It was strange.”

During a tough time for Ellis and his family, the Colonials’ assistant coaches and players had his back.

The Colonials (3-1) played in Ellis’ honor when they stepped onto the field against Howell, making their coach proud with an outstanding effort to win their third game of the 2020 season.

A three-touchdown performance by senior quarterback Sha’Kim Shuler and three interceptions on defense led the way to a 33-13 victory over the Rebels.

“It feels like family,” Ellis said. ”I preach family to these guys all the time. I was down this week. My coaches picked me up. The players picked me up. It’s the same thing in a game. When the chips are down, we all have to have each other’s back and they all had my back (tonight). It was awesome to see.”

Shuler completed two passes for 62 yards on the game’s opening drive, which ended when he connected with junior Tyler Ochojski on a 36-yard touchdown pass to give Freehold a 6-0 lead.

Ochojski had a sack on defense later on in the contest.

After Howell tied the game early in the second quarter, the Colonials answered right back on the first play of their next possession.

Feeling the pressure coming from the Rebels, Shuler got a pass off right before he was hit. He found a wide open Yah-Shin Calhoun, who then juked his way past a couple of defenders to the end zone for a 64-yard touchdown to put Freehold back in front.

Following an interception by Matt Grady on Howell’s next possession, Shuler helped Freehold capitalize on the turnover with his third touchdown of the contest. The senior ran up the middle for an 11-yard score to extend the lead to 19-6 with 4:30 left in the half.

TOUCHDOWN FREEHOLD BORO: Colonials take advantage of the INT & extend their lead on an 11-yard TD run by Sha’Kim Shuler. His 3rd TD of the half. @FBHSathletics up 19-6 with 4:30 to go in the half. CC: @coachdantoniojr @central_jersey #NJFootball 🏈 pic.twitter.com/qOxQcWOgSB

Shuler finished with 202 yards rushing and threw for 168 yards.

“We played for Coach Ellis. He was down this week and we had to come out hard in practice and pick it up for him,” Shuler said. “We have a high-scoring offense. I think we have one of the top offenses in the Shore Conference. We have a lot of fast players. It’s hard to stop speed in space.”

Calhoun put the finishing touches on an impressive first half performance by the Colonials with his second TD. Taking the snap out of the wildcat formation, Calhoun burst through a huge hole up the middle for a 36-yard touchdown with 1:06 left in the half. Freehold led 26-6 at the break.

Touchdown #2 of the night for Yah-Sin Calhoun who bursts up through the hole for a 36-yard TD run to put @FBHSathletics up 26-6 with 1:06 left in the 1st half. CC: @coachdantoniojr @central_jersey #NJFootball 🏈 pic.twitter.com/4qrJ1kv24d

Calhoun also had an interception, he caught four passes for 136 yards and rushed for 98 yards.

“I just do what I can to help my team,” Calhoun said. “The offensive line did a beautiful job all game. Blocking to the whistle and giving a 100% effort. That is what we preach in practice all the time.”

Junior Kamore Gill snared Freehold’s final interception with 7:08 to play when he picked off a pass from J.T. Goodman near midfield and ran it back for a touchdown.

PICK 6! Kamore Gill picks off Goodman & runs the interception back for a TD. 2nd INT of the game for Freehold Boro. @FBHSathletics up 33-6 with 7:08 left to play. CC: @central_jersey @coachdantoniojr #NJFootball 🏈 pic.twitter.com/ZxogScOQ2u

It was a difficult week for Ellis, but he was able to see it end in a way that made him proud of his assistant coaches and his players.

“It’s an emotional win. They played with emotion from the word go. My coaches did a tremendous job getting these guys ready this week and the kids did a great job by playing with emotion (tonight) and playing hard. I am so happy for them,” the Colonials’ coach said.

Freehold will host Freehold Township at noon on Oct. 31.