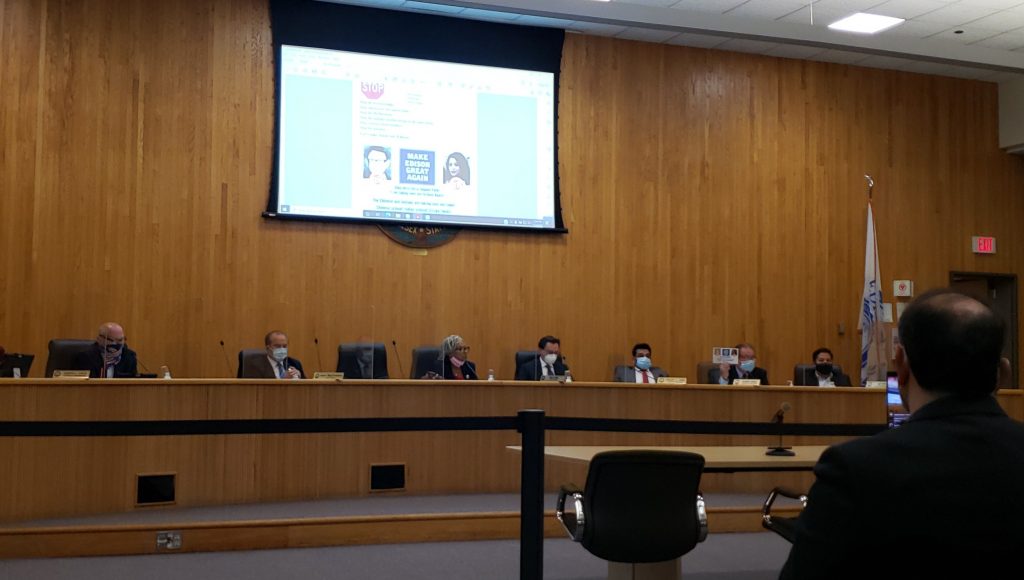 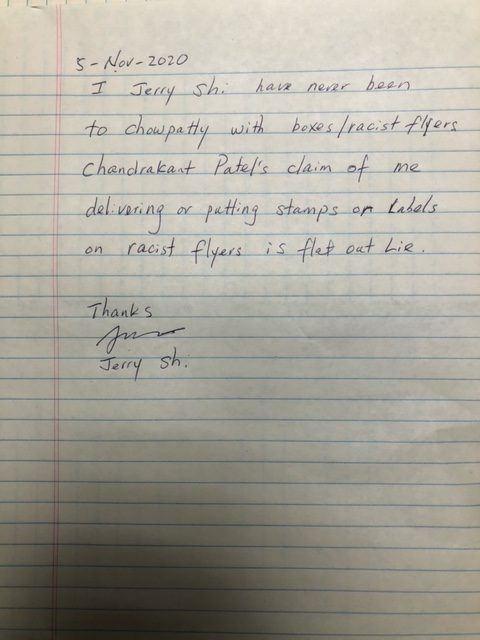 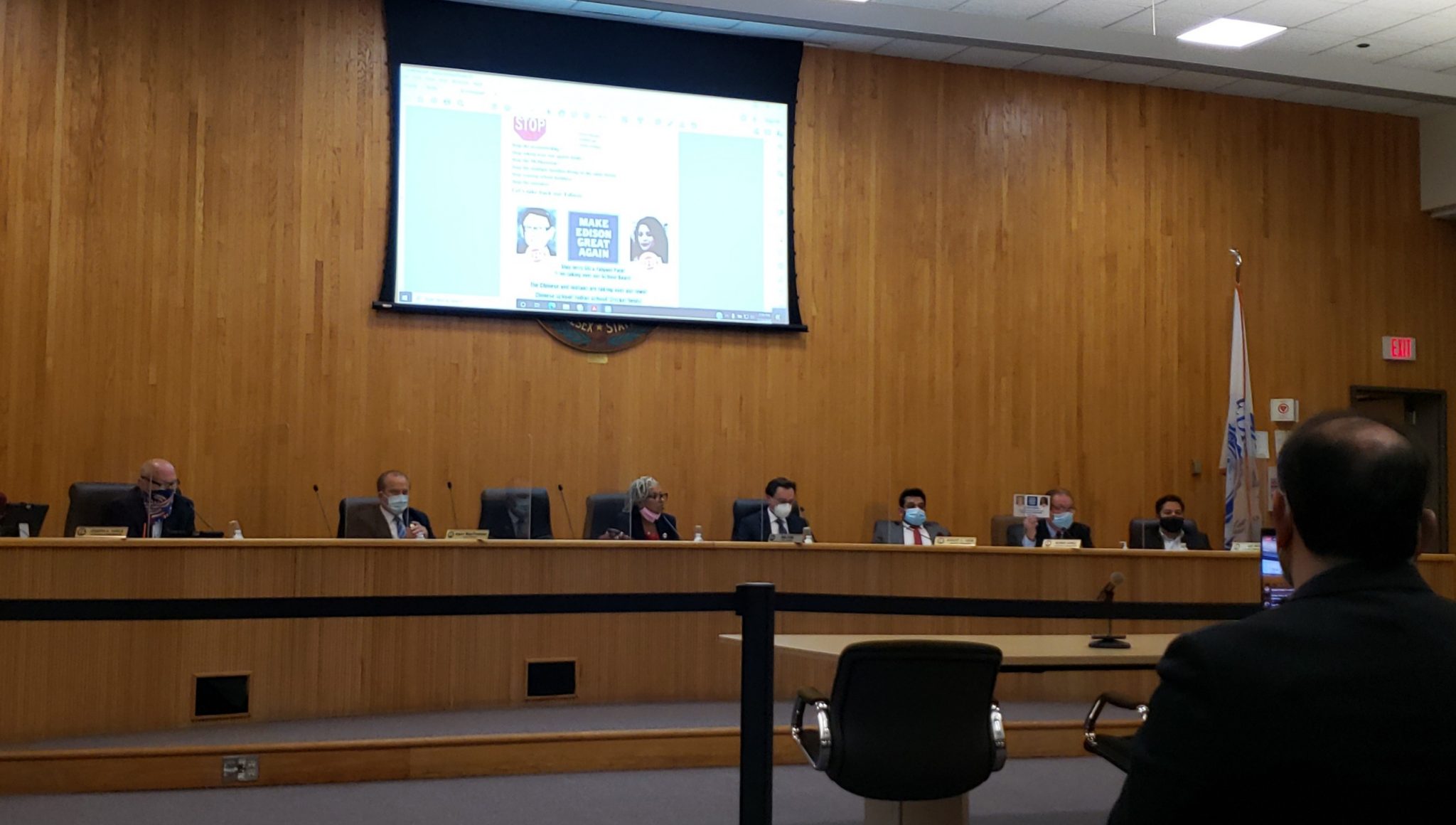 EDISON – Was the racist flier that was distributed by mail during the 2017 Edison Township Public Schools Board of Education election “a political trick for politics”?

That is what Township Councilman Robert Diehl believes, and he called the information in United States Postal Inspector David Comer’s report “a shame” during a Committee of the Whole meeting on Nov. 5.

Comer’s report names six members of the community who were allegedly involved in assembling or mailing the flier: Satish Poondi, the legal adviser for the Indian Business Association who previously served on the Mayor’s Advisory Committee on Community Relations in Edison; Raj Bhagia; Mohin Patel; Township Councilman Ajay Patil; Board of Education member Jerry Shi; and Shariq Ahmad, the former chairman of the Edison Democratic Organization.

Ahmad was allegedly found to have purchased 80 rolls of the same postage stamp that was used on the flier on Oct. 28, 2017, at the Edison Post Office on Route 27.

Members of the Committee of the Whole read Comer’s report verbatim at the meeting on Nov. 5.

Diehl said they had subpoenaed Comer to testify about the report; however, an attorney representing the U.S. Postal Inspector’s Office indicated Comer would not comply with the subpoena on Nov. 4.

The attorney said live testimony of a federal agent needed additional affirmations made in regard to the nature of the testimony and then the office would evaluate the request.

Comer previously testified before the Committee of the Whole. He said 137 racist flier postcards which have been marked and submitted as evidence have gone through a visual examination and an alternate light source examination, and have been submitted to a forensic laboratory.

Out of 137 postcards, slightly fewer than 50 postcards came back with fingerprints.

Aloysius Dsouza’s fingerprints were found on one mailing that was sent for testing at the forensic laboratory, according to reports. This finding ultimately led to an interview with Chandrakant Patel, founder of Chowpatty Restaurant in Iselin, on Sept. 28, 2020.

Patel named the six people during an interview with Comer. He said he was contacted by Poondi in October 2017, allegedly requesting help in “mailing things.” Patel said he was an active member of the community since the 1990s and allows members of the community to use his restaurant for community-related activities.

He said each of the six individuals came into his restaurant carrying boxes that included large postcards, according to reports. He reportedly asked Aloysius and Joseph Dsouza, who were working at the restaurant, to help them with the mailing.

Ten days after, Patel, who said he was not involved in the dissemination or creation of the flier, said he saw a news story about the flier. He contacted Poondi and asked him what was going on. Allegedly, Poondi instructed Patel to stay quiet, to not discuss the flier with anyone and to not say anything to anyone, according to the reports.

Diehl said Patil, who was one of the six people named in the report, reached out to him on Nov. 4 to discuss the situation. He said Patil did not have or see the report prior to their meeting.

Patil met with Diehl, Comer and Councilman Alvaro Gomez on Nov. 5. He explained he was at the Chowpatty Restaurant in late October and did see the flier being prepared; however, he said he had no part in assembling, creating or disseminating the flier.

Patil, who attended the meeting virtually, said he was at the wrong place at the wrong time. He released a sworn written statement on Nov. 6 adding he did not see any of the named people in the report at the Chowpatty Restaurant other than the two employees, the Dsouzas.

Diehl said Patil told them the architects of the racial flier were allegedly Poondi, Bhagia and Mahesh Bhagia, who was not named in the report. Mahesh Bhagia is the current Edison Democratic municipal chairman and works as an aide to Mayor Thomas Lankey.

The mayor released a statement on Nov. 6 stating he was “deeply disturbed by the federal report of a conspiracy surrounding the abhorrent racist flyer.”

“Let me be perfectly clear, the township of Edison is united in condemning the actions of the men who brought disgrace upon themselves by trying to divide this town,” he said. “While they will have to answer to law enforcement and their own conscience, I want to assure every resident that Edison continues to stand together in moving forward in a spirit of inclusion and unity.”

Ahmad took to social media denying his involvement with the racist fliers on Nov. 6.

“This is local politics at its absolute worst,” he said. “I was outraged to learn that Chandrakant Patel and Ajay Patil had been caught having involvement with the flyer. At the end of the day, their actions are an embarrassment to all of Edison Township, which, despite its incredible residents, seems to always attract negative headlines because of things like this.”

Ahmad further said the claims made by Patel and Patil “are absolutely false and I unequivocally deny all of them, period. I was not there and had no knowledge of it. I will be speaking with an attorney about filing a slander lawsuit against both of them.”

A few days after the 2020 election season, questions still linger surrounding the offensive events of the 2017 election in Edison.

“It will not go without us investigating further because we made a pledge we would continue as long as we were able to bring the people who were responsible for this injustice,” Diehl said, adding that another Committee of the Whole meeting will be scheduled.

Councilman Richard Brescher said he requested a copy of Comer’s report, but did not receive one. He said he suspected politics were in play after learning news media outlets received copies of the report.

Diehl denied it was political.

Township Council President Joyce Ship-Freeman said Diehl made sure no politics were involved and decided to hold the meeting after the election.

Shi appeared before the committee in October 2019 with his attorney Christopher Keating.

Aside from a joint statement with Falguni Patel denouncing the racist flier after it was mailed during the 2017 Board of Education election, Shi, who ran for re-election for a board seat in the recent election, has remained relatively mum about the incident that made national news. Shi has not spoken with law enforcement personnel, according to officials.

During his testimony, Shi called the flier “vile and disgraceful” and said he has been “forever traumatized from the experience.”

When reached after the meeting, Shi offered a written statement.

“I, Jerry Shi, have never been to Chowpatty with boxes/racist flyers. Chandrakant Patel’s claim of me delivering or putting stamps or labels on racist flyers is flat-out lie.”

Edison Police Chief Thomas Bryan has said the investigation is in the hands of the New Jersey Attorney General’s Office.

Peter Aseltine, a public information officer for the attorney general, has said the office’s policy “is that we neither confirm nor deny investigations.” 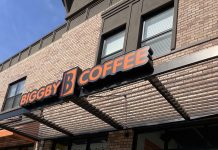