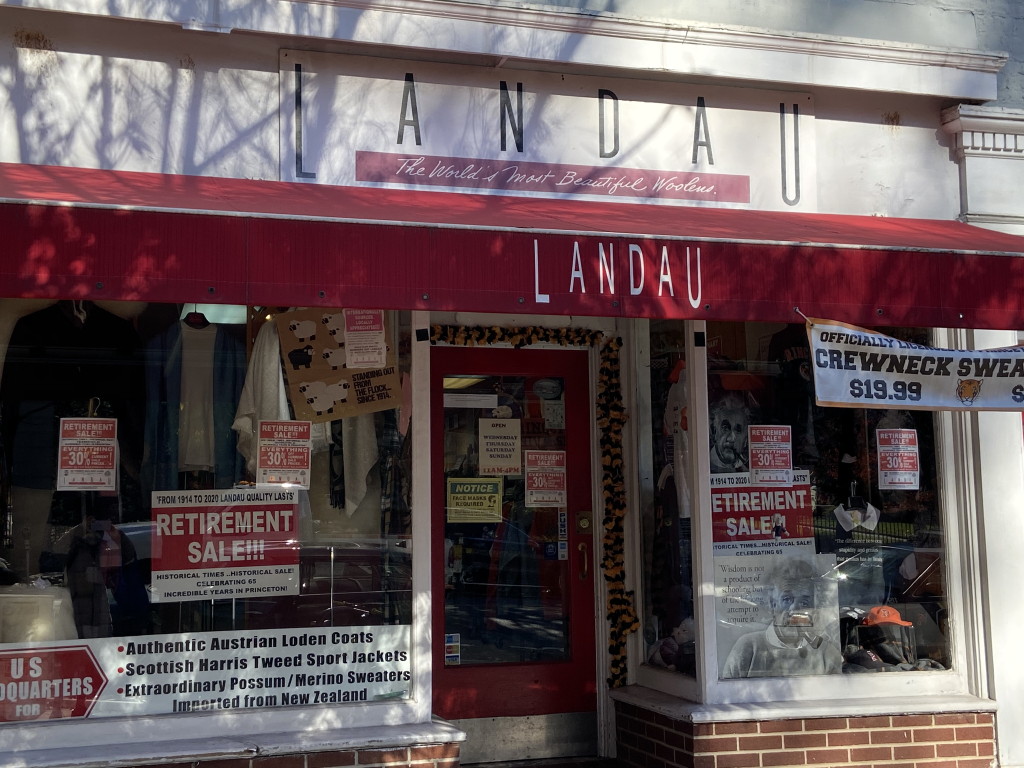 For kids growing up in Princeton in the 1980s and 1990s, a highlight of Princeton’s Nassau Street scene was Lindy. Everyone loved Lindy, the 200-pound stuffed ram, who often served as a designated gathering spot for middle school and high school students heading in town, uptown, downtown. Lindy’s adoptive parents, Robert and Henry Landau, told me that a Princeton University student even wrote a senior paper about Lindy’s role as a community convener.

Lindy, whose full name was Lindbladier, had the prestigious job of being the mascot for Landau woolens store, a Princeton retail destination for 65 years, located at 102 Nassau St., that soon will be closing its doors. For a few decades of those 65 years, Lindy perched himself outside the store near the curb (I am amazed that Lindy never got a ticket for violating historic State Highway Route 27 right of way) and watched the passers-by, a few of whom would pet him a little too aggressively or try to ride him like a pony.

Lindy was “ram-napped” twice, both times causing great consternation among his fans in town. The first time, he was returned within 24 hours. The second time, the nappers were less benevolent, and Lindy’s remains were never located. The Landaus adopted another stuffed ram named Bjartur, sounds like Bea Arthur, but he has been kept inside the store for safe keeping. His base was made of Styrofoam, making him weigh far less than Lindy and therefore more nap-prone. Thus, the ram’s iconic role of watching over Nassau Street was diminished.

When my daughter heard that Michael and Henry Landau were retiring and selling the store, she was one of hundreds of fans reacting with shock and sadness – similar to how she reacted when Lindy was stolen. The Landau-Lindy era was coming to an end.

Particularly memorable to me were the following – and this is only a partial list:
• The Landaus installed in the back of their store the only museum in the country dedicated to Albert Einstein.
• They were the longest promoter of Communiversity – a role ended this year by COVID-19.
• Some may remember the kittens crawling around the front windows of the store when the Landaus were dong their kitten adoption initiative that placed 1,000 kittens over a three-year period.
• With the support of Princeton University, the Landaus organized an annual picnic for hundreds of senior citizens – or “experienced humans,” as Robert called them. It became so popular that they were unable to handle the numbers.
• Also, for “experienced humans,” the Landaus started a holiday wish list that matched seniors and what they wanted/needed with generous donors. “My sons Simon and Matthew and I would spend Christmas Day delivering wish list gift to the seniors,” Robert said.
• And does anyone remember Sonny Perrine? Decades ago, Sonny, confined to a wheelchair, was as much part of the Nassau Street sidewalk scene as Lindy. He would wheel his way up and down Nassau Street selling candy, gum, and if I remember correctly, other random stuff, including good conversation. The Landaus dedicated a handicapped seat in McCarter Theatre to Sonny.

My daughter Rebecca was the first one to inform Robert Landau that his store made it as a question on “Jeopardy!” in 2018. The answer was: “The only U.S. museum devoted to Albert Einstein.” And the question was: “What is tucked inside a woolens shop in Princeton, New Jersey?”

The filming 25 years ago in Princeton of the movie “IQ” starring Walter Matthau and Meg Ryan inspired Robert and Henry to create a museum filled with Albert Einstein memorabilia. Even though the “IQ” film stars never came into the store to see the Einstein memorabilia donated by local residents, the museum became a star in its own right.

Robert said that the Historical Society of Princeton would adopt the contents of the museum after the Landaus retire. As far as the contents of the non-museum portion of the store, the Landaus are looking to sell the business to a retailer from Ireland who “will offer somewhat different from but not incompatible with what we now are selling,” said Robert, who acknowledged that the motivation for their retirement at this time was the stress associated with trying to operate their business during a pandemic, combined with the fact that both Landaus are “experienced humans” – Robert is 74 and Henry is 70.

The legacy of Landaus goes far beyond that of hardworking merchants selling fine woolen clothing to keep the body warm and cozy. They were weavers of an exuberant community spirit that has warmed countless hearts.