The woman and her 36-year-old friend were at the Travelers Inn at 2316 Route 130 around 5:22 p.m. Nov. 16. The woman and her friend were allegedly yelling and arguing with people at the motel. People from the motel called 911 to report the dispute, according to information provided by the South Brunswick Police Department on Nov. 19.

The woman and her friend allegedly continued to yell at the people on the second floor of the motel as they walked to their parked vehicle, an 2004 Acura TSX. The woman began to back out of the parking spot next to the motel, when her friend reportedly opened the passenger’s side door to continue to argument with the people at the motel. As the driver backed out, her friend fell under the car and was run over.

The driver pulled the car forward to get off the friend and exited the car. She then helped the friend get back in the vehicle and left the scene headed onto Route 130 north, according to reports.

Sgt. Richard Hutchison arrived and spoke with witnesses, then stopped the vehicle a quarter mile from the motel on Route 130, according to reports. Hutchison called for South Brunswick EMS who transported the man to Robert Wood Johnson University Hospital in New Brunswick. The friend suffered extensive injuries including a broken pelvis and ribs. He went under several hours of surgery and remains hospitalized, according to the statement.

An investigation by South Brunswick Police Traffic Safety Bureau Officer Jesse Blake determined that the woman had a suspended license at the time of the crash. In addition, she left the scene and failed to report the crash.

As a result of the investigation, the driver is charged with fourth degree charge of causing a motor vehicle crash while having a suspended driver’s license, leaving the scene of a crash, driving while suspended and careless driving.

She is free pending her first court appearance. 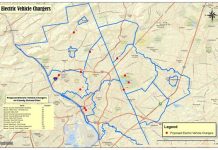