EAST BRUNSWICK–The Township Council introduced an ordinance authorizing the municipality to enter into a financial agreement with the redeveloper of the 110 Tices Ln. Redevelopment Project.

The property is currently owned by the redeveloper, Tices Developers, LLC.

The redeveloper proposes to redevelop the project area with the construction of 520 residential dwelling units consisting of apartments, townhomes, a clubhouse, maintenance facilities, 18,000 square feet of retail space, and adequate parking to accommodate the residential and retail components, according to the plans.

The redeveloper and the Redevelopment Agency have agreed to enter into a redevelopment agreement with the agency dated November 2020 to set in detail each parties’ undertakings, rights and obligations in connection with the development and construction of the project, according to the council.

On Nov. 9, before the council introduced and approved the ordinance, Mayor Brad Cohen said this ordinance is an attempt to use the redevelopment law to replace functionally obsolete industrial space in town and replace it with a modern mixed-use transit-oriented development for the needs of those who are living here now.

“For those that are only concerned about the monetary effect, the tax effect on this is significant. The present tax revenues that we have for this property is about $500,000 a year, which only 20% comes to the township under the current tax code,” Cohen said. “With the new PILOT [payment in lieu of taxes] agreement … it will bring upwards of [more than] $2.5 million over a 30-year period of time yearly. At 95%, which is how a PILOT works, it would net out to the town to $2.375 million or more per year going forward.”

While it’s a five times increase in the amount of taxes coming to the township, Cohen said it’s a 23.75% increase in terms of what comes to the municipal government.

“I think that people need to keep in mind that significant increase can be used to fund recreational programs, school programs that may be needed and in many other infrastructure programs in town that would otherwise fall to the current taxpayers and residents,” Cohen said.

Redevelopment Agency Chairman and Councilman James Wendell said on Nov. 9 that this financial agreement will be a tremendous tax windfall for the town.

“It’s a great development coming to town. I think it’s going to add a lot of revenue. There were many months of negotiation between the developer, myself, Redevelopment Agency Director Michael Hughes, and the mayor and everybody else got involved and it took a long time to get to the point where we’re at,” Wendell said. “I think that we’re sitting on the high side from what the other towns get and I think developers understand what the township … brings to them and the long-term investment that they’re going to make.”

Wendell said the developer understands what the township brings to them and the long term investment that they’re going to make. The good part of this developer is now the agency will have a partner that is going to be a long-term investor in town.

“These are not merchant builders that are going to look to build something and sell it, and I think to have a 30-year long term partner in town is a great thing to have …, they know what it takes to keep these buildings going and keep these buildings successful,” Wendell said.

The council approved and adopted the ordinance authorizing the financial agreement between the agency and the redeveloper for the 110 Tices Ln project on Nov. 23 during the council via video conference.

In order to enhance the economic viability of and opportunity for a successful project, financial assistance is necessary in order for the project to be undertaken in its intended scope, according to the council.

Councilman Kevin McEvoy asked Township Attorney Michael Baker if that means there is going to be a need for someone ask the township for money.

“No, what that means is that this project couldn’t happen without there being some different structure for the taxes that they would pay because it said. It’s very common, particularly when you’re developing an older industrial site that had some environmental issues, you have a large facility to take down and concrete to take out,” Baker said. “When you’re also having to meet some of the significant portions of the township’s requirements under the Fair Housing Plan, it makes for a much more expensive than usual project, as in anticipation of those things. The state legislature passed statutes that allow a town to structure differently.

“The way that these properties would be taxed, it’s the long term tax exemption statute that allows for a special financial arrangement between the property owner and the developer to be made, and it’s in an effort to make sure that the project is viable, that the old industrial facility can be properly developed and that it’s fair to both parties,” Baker said.

For this agreement, Baker said the developer and township professionals held weekly in-person meetings through March. Now, using the Zoom platform, the professionals have continued to meet and got to the point where everyone is comfortable that this is a very good deal for the township.

An application went before Cohen and the council for the approval of a long-term tax exemption in accordance with Long Term Tax Exemption Law (LTTE) for the improvements to be constructed as part of the project, according to the council.

Baker said the long-term tax exemption is the statute that allows the structure of taxes for a project in a redevelopment area to be raised differently instead of having an “ad valorem” tax which is the tax on the value of the property. There are two options, it can be a percent of the construction or a percent of the revenue, he said.

This ordinance will take effect in accordance with all applicable laws, according to the council. 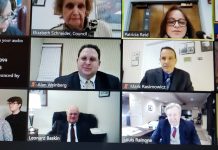