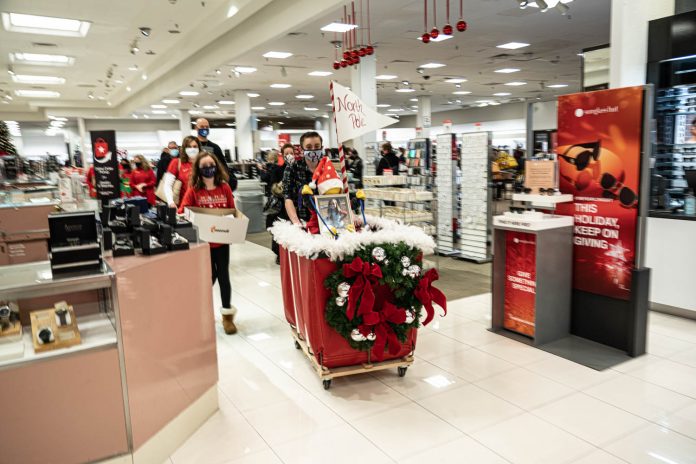 EAST BRUNSWICK – When 7-year-old Kendall Bresocnik was granted her wish from Make-A-Wish New Jersey in the spring, she asked her mother if she was going to be able to ride in the sleigh with AJ Silvestri during his annual delivery of holiday letters as part of the Macy’s “Believe” campaign.

And ride the sleigh she did, symbolically, as Kendall’s photo was placed on the sleigh as AJ delivered thousands of holiday letters to the Macy’s at Brunswick Square Mall in East Brunswick on Dec. 4. Kendall passed away in May after a short, but fierce battle with brain cancer.

“This was one of her favorite things of the year,” said AJ’s mother Kerryann S. Silvestri. “We really wanted to honor [Kendall] today and honor [her sister] Jillian. When her wish was granted she specifically asked her mom ‘Am I going to ride the sled with AJ this year?’ so here she is in spirit with the biggest heart and biggest angel you will ever know … I know she’s smiling down on us.”

AJ, a junior at Old Bridge High School, teamed up with one of his biggest supporters, Jillian Bresocnik, a fifth grader at Southwood Elementary School, to spearhead his annual letter campaign for Make-A-Wish through Macy’s Believe campaign.

Jillian and her sister, Kendall, were among AJ’s biggest supporters. The Bresocnik family, who also include parents Erik and Kerri-Ann, wrote and collected more than 15,000 letters over the past several years.

The Bresocnik family joined the Silvestri family to help deliver the holiday letters on Dec. 4. They were welcomed by Trish Falzini, Macy’s store manager at Brunswick Square Mall.

“The campaign has been important to our family for the last few years,” said Kerri-Ann Bresocnik. “Helping AJ has been a pleasure and we’re so thankful to the Silvestri family for allowing us to honor Kendall this year. No doubt she’s smiling down on us right now and we hope to continue to be able to support this campaign.”

In April, Kendall was diagnosed with inoperable brain cancer. Kendall was granted a wish from the Make-A-Wish New Jersey to build a swimming pool in her parent’s backyard.

In a YouTube video, Jillian explained her sister was “a happy silly 7-year-old who went to Southwood Elementary School.”

“She loved rainbows and unicorns,” she said.

This year’s Believe campaign was held in memory of her sister with the name “Believe in Unicorns” campaign.

Since 2014, AJ, with the help of his supporters from the Old Bridge Township schools, other communities around the state and countries outside the United States, has collected more than 500,000 letters. Last year, AJ collected letters as far as Alaska, Hawaii and even New Zealand.

This year marks the 13th annual Believe campaign between Macy’s and Make-A-Wish. From the beginning of November through Christmas Eve, “believers” of all ages can mail letters to Santa at the big red letterbox at any Macy’s store or online at macys.com/believe.

For every letter received, Macy’s will donate $1 to Make-A-Wish, up to $1 million, to help create life-changing wishes for children with critical illnesses.

Letters delivered on National Believe Day on Dec. 4 to any Macy’s nationwide counted for a $2 contribution from Macy’s per letter, up to an additional $1 million, bringing the total campaign to a possible $2 million.

Since 2003, Macy’s has donated more than $132 million to Make-A-Wish, including more than $21 million through the retailer’s annual Believe campaign, helping grant more than 15,500 wishes and impact more than 3.1 million people, including wish kids and their families, volunteers, community groups and medical professionals.

Make-A-Wish provides children with critical illnesses the chance to experience life beyond their illness and see their most heartfelt wish come true, allowing them to replace fear with confidence, anxiety with hope and sadness with joy.