Lawrence Township’s focus on sustainability – from creating a solar carport at the municipal building to installing two electric car charging stations for public and municipal use – has earned the Governor’s Environmental Excellence Award for Climate Change and Clean Air.

“On behalf of my fellow Township Council members, the municipal manager and the residents of Lawrence Township, I am honored to accept this award,” Bobbitt said.

Municipal Manager Kevin Nerwinski said he hoped that township residents would take pride and ownership of the award. It validates years of hard work and commitment by Lawrence Township to complete several “meaningful projects” to reduce its carbon footprint, most of which were funded by grants, he said.

“Lawrence is a community that leads in sustainability. Our elected officials have embraced the idea of being environmentally responsible in our municipal operations,” Nerwinski said.

Lawrence Township’s goal to reduce greenhouse gas emissions from municipal operations had its genesis in the township’s review of its carbon footprint, which was completed in 2017 as part of its quest to receive re-certification by Sustainable Jersey.

During his term as mayor in 2018 and 2019, Bobbitt participated in the 2018 New Jersey Mayor’s Climate Summit and signed a pledge to reduce the township’s greenhouse gas emissions.

Lawrence Township had already taken steps to cut down on its carbon footprint through the New Jersey Office of Clean Energy’s Direct Install program. The township upgraded lighting, heating and air conditioning in several municipally-owned buildings in 2011 and 2015.

As township officials began to explore additional methods to save energy and reduce its carbon footprint, they discovered that more-than-normal business usage at three key buildings were significant contributors to greenhouse gases.

Roof-mounted solar panels have been installed at the Department of Public Works building on Bakers Basin Road.

A roof-mount solar panel array also is being installed at the Lawrence Senior Center on E. Darrah Lane, and is expected to provide all of the needed electrical power for the building. It is also intended to be a community demonstration project that will serve as a roadmap for interested homeowners to follow, township officials said.

Additional solar energy panels may be installed at the Lawrenceville, Lawrence Road and Slackwood firehouses, and at the Lawrence Township Emergency Medical Services building. Township officials are looking into the feasibility of installing the panels on the township-owned buildings.

The township also updated its Land Use Ordinance to promote wind and solar energy systems as permitted in all zoning districts. The revisions were made in recognition of the objectives of the New Jersey Energy Master Plan to broaden the methods for producing energy. 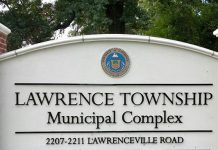 Lawrence Township Council dissolves one committee and creates a new one