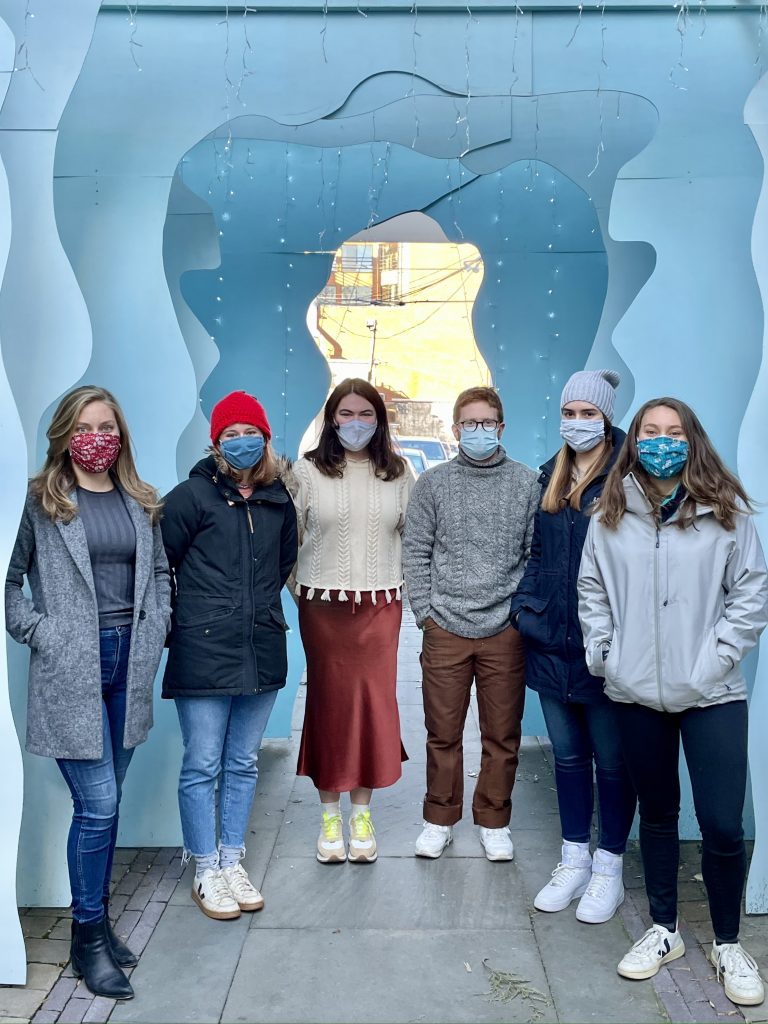 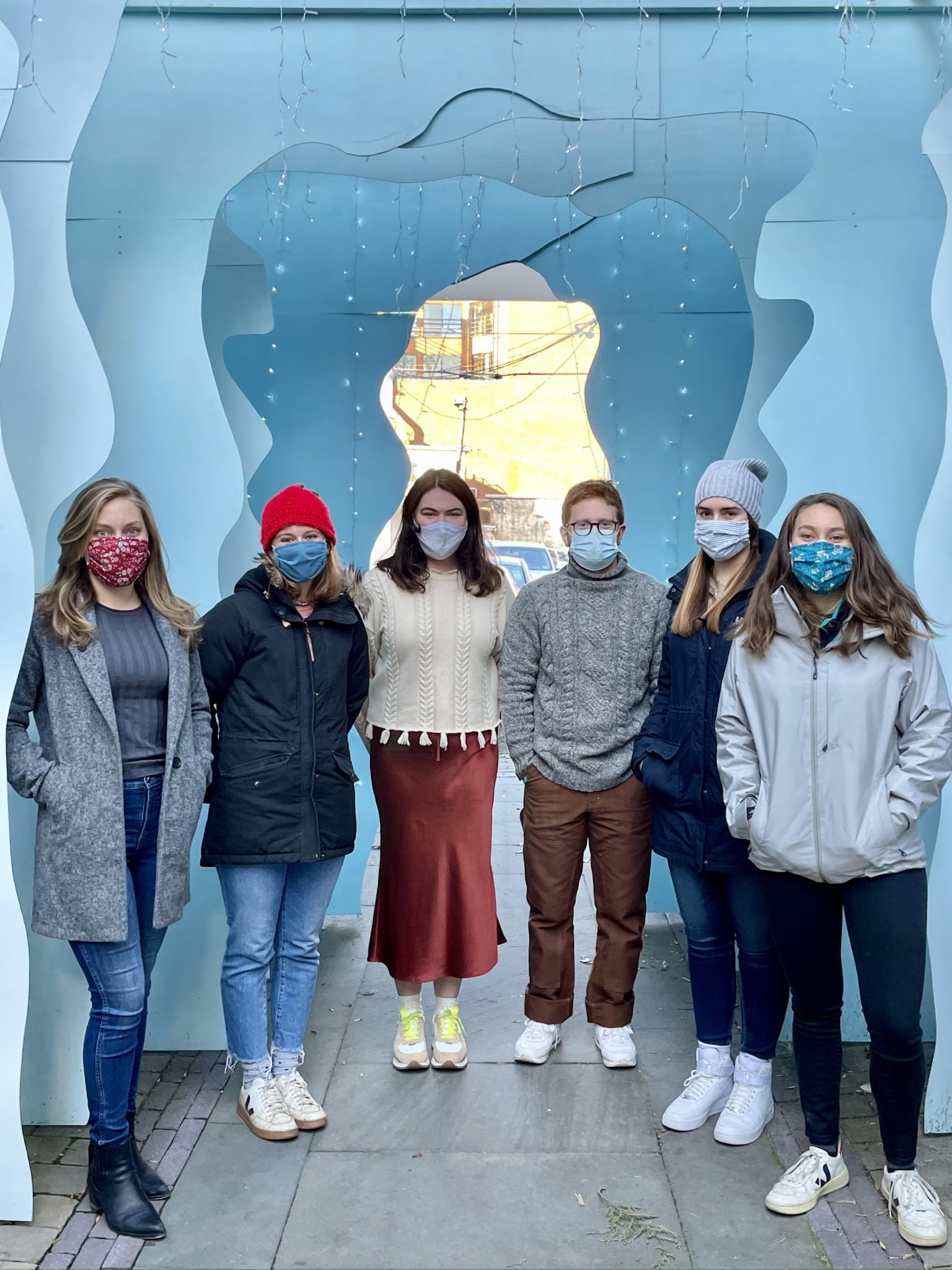 In this year of big tragedies and anxieties, I preferred complaining about small irritations in life. These proved to be perfect conversation topics for the pandemic era, neither annoyingly Pollyanna nor overly depressing.

My favorite small irritant topic about which I loved to rant was Dohm Alley, a Princeton Future project for the creative restoration of the alleyway between Landau’s and Starbucks. For the past several months, Dohm Alley was an empty and sad space, resembling nothing of the initial promise for an inspiring and alive open air arts gallery, “a dynamic sensorium,” that is part garden, part classroom, inviting pedestrians into a lively and interactive experience, in the words of its creators Kevin Wilkes and Peter Soderman in 2017.

And then Princetonian Emma Brigaud, like a Christmas angel, appeared in the Alley the week before Christmas and changed everything. Her magic wand was intense creativity, determination, and hard work. With a little help from her friends (not elves), she transformed Dohm Alley from a dark, bare and depressing Dickensian environment to a winter wonderland creation.

Having graduated in May from the College of William and Mary, Emma, an alumna of Stuart Country Day School in Princeton, kept busy by looking for a job virtually and wondering how to best combine her artistic creativity with her college major in business marketing. On one of her strolls through downtown Princeton, she walked into the ideal solution – Dohm Alley.

Emma, a few years ago, contributed to the creation of the Dohm Alley arts space when she worked as an intern for Princeton Design Guild, the design/build firm of Kevin Wilkes. Emma “was honored and thrilled” to have been asked to paint the 19th century urban, industrial landscape, bringing to life William Blake’s poem “The Chimney Sweeper”. The artistic theme of the entire Alley was the era of the Romantic poets.

“Because I had invested a lot of time and energy in the initial exhibition in the Alley, I felt very sad when the sculptures and paintings were removed from the Alley earlier this year. I became focused on implementing some sort of Alley improvement,” she said.

It took her no time to decide she wanted to celebrate winter by turning the Alley into a winter wonderland. “Inspired by what I had learned from the artists and architects who a few years ago created fabulous outdoor/weatherproofed exhibits, I felt I really could make it work,” Emma said.

So she got to work and melded her business skills with her artistic talents. She wrote a proposal with a budget and presented it to Princeton Future’s Co-founder and Administrator Sheldon Sturges. With a Princeton Future grant of $2,500, Emma moved forward quickly, established a schedule (the whole project from conception to installation took three weeks), assembled her team comprising Princeton friends whose lives also were in COVID-caused limbo, sketched her design, purchased materials, created sections of the exhibit off site at the office of Princeton Design Guild, and then proceeded to installation. And most inspiring was the fact that the project came in under budget.

“I had the idea of a winter wonderland for this exhibit that would run through January (maybe through Valentine’s Day), because I wanted to celebrate the joyful, magical elements of the winter season, rather than focus on the depressing, winter cold and dark along with the continued bad news of the pandemic,” she said.

It is a multi-sensory experience of sights and smells. It incorporates evergreens donated by Kale’s, hand-painted winter villages nestled in the rolling snowscape, forest creatures, and a walk-through ice cave. String lights are woven throughout the space to create a warm glow after the sundown.

The concept, Emma said, builds off of the pre-existing train tracks installed in the alley in 2017 (located in the first archway). Traveling through the alley, pedestrians enter an evergreen forest. To the right, they will look out of four “train windows” (framed wood panels) depicting painted scenes of a winter landscape. In each following scene, the sky darkens and the lights in the little houses start to “turn on” to depict the passing of time. To the left is a row of birch trees with bright red cardinals and a scattering of squirrels and rabbits in the snow mounds. Evergreen boughs and garlands hang from the archways. Past potted spruce trees, a deer family and Scandinavian gnomes, stands a 3D ice cave at the end of the alley. (The ice cave is composed of five spaced out layers of cut and assembled plywood sheets. They are painted in an icy blue gradient).

Even though the cold brought numb fingers and toes to the team of workers, they were warmed by the camaraderie of working together on such a creatively satisfying project that is bringing the community together. The Winter Wonderland workers also felt uplifted by the reactions from passers-by or more accurately passers-thru.

“When we were doing the installation, people of all ages expressed enthusiasm and thanked us for doing it. One woman in a nearby upper floor, leaned out her window of a near-by upper floor apartment and give us a fist bump,” said Emma.

My journey through the Winter Wonderland of Dohm Alley worked magic on me. It not only thwarted my small-irritant (and, I am sure, very irritating) ranting, but also shed light on the importance of looking on the bright side of life. Some would say that sounds very Pollyanna, but I say it is very Emma.