Incumbent Hightstown Councilman Joseph Cicalese and political newcomer Cristina Fowler, both Democrats, were sworn into office for three-year terms. Cicalese was filling out a vacancy on the Borough Council, but will now serve a full three-year term.

Cicalese thanked Hightstown voters for “inviting me back” to serve on the council. He thanked his colleagues on the Borough Council, the municipal staff and the volunteers who serve on the advisory boards and committees.

“I am really proud of this town. I am excited to see how things go in the coming year,” Cicalese said.

Fowler said it’s an honor to serve on the Hightstown Borough Council, and thanked voters for giving her a chance to serve.

“My sleeves are rolled up and I am ready to get to work,” Fowler said.

Stults was the council’s liaison to the Construction/Inspections Department, the Hightstown Housing Authority and Downtown Hightstown. He served on various Borough Council and mayoral subcommittees, according to the proclamation issued by the mayor and Borough Council.

Stults was also instrumental in the planned redevelopment of the former rug mill property on Bank Street, the proclamation said. The 10.8-acre property, which is part of the Bank Street Redevelopment Area, is bounded by Bank, Main, Academy and Stockton streets.

Plans call for the property to be redeveloped into a mixed-use development. There will be 387 residential units, including a mix of apartments and townhouses, plus commercial space.

Stults also played a role in the purchase of the former YMCA building at 230 Mercer St., which will become the new Hightstown Borough Hall. The former municipal building on Main Street was damaged by flooding from Hurricane Irene in 2011.

“Mr. Stults has given his time, talents and effort to serving the Borough of Hightstown in this public capacity. The mayor and council hereby commend and thank Charles ‘Lee’ Stults for his commitment and dedication to the borough and its residents,” the proclamation said.

Cicalese nominated Bluth for the post, and Councilman Dimitri Musing provided a “second” for the nomination. The vote was unanimous.

“Congratulations, Susan. You are my council president. Roll up your sleeves, we have a lot of work to do,” Quattrone said.

Bluth thanked her colleagues on the Borough Council for their confidence in choosing her to serve as council president.

“I do not take it lightly. I am looking forward to it. I know I have some big shoes to fill,” she said in a nod to Musing, who held the post in 2020.

Wrapping up the meeting, Quattrone said Hightstown Borough did “very well” in 2020. The town paved several streets, and received thousands of dollars in grants to help maintain its infrastructure.

“Many things have changed,” Quattrone said. The municipal offices are closed to the public and the staff members are working remotely. There are virtual Borough Council meetings. Crime is also at its lowest level, he said.

“The Construction Department is overwhelmed with permits, and that’s good. People are doing work on their homes, which raises property values. The number of property sales has gone up,” he said.

“As mayor, I will work to keep things going in the right direction,” Quattrone said. 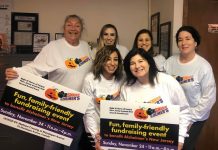