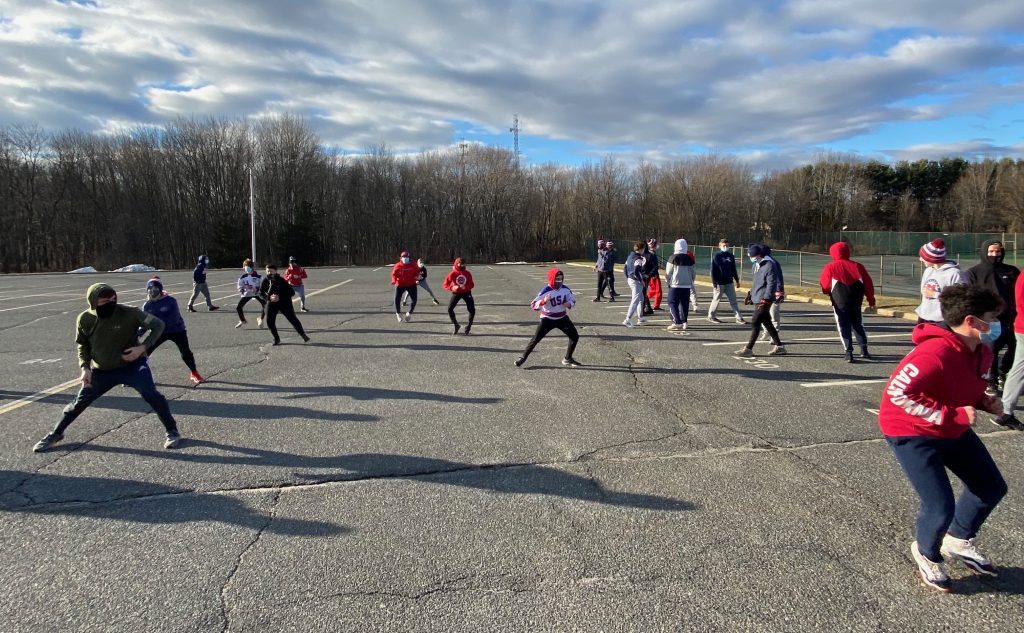 1 / 3
The Manalapan High School ice hockey team holds an outdoor practice in the school's parking lot on Jan. 6. The Braves will hold their first practice at Howell Ice Arena on Jan. 11. PHOTO COURTESY OF MATT INZERILLO

2 / 3
The Middletown High School South ice hockey team holds an outdoor practice at the school's turf over winter break. The Eagles will hit the ice for the first time this season at the Middletown Sports Complex on Jan. 11. PHOTO COURTESY OF ANDREW ROSENBLOOM 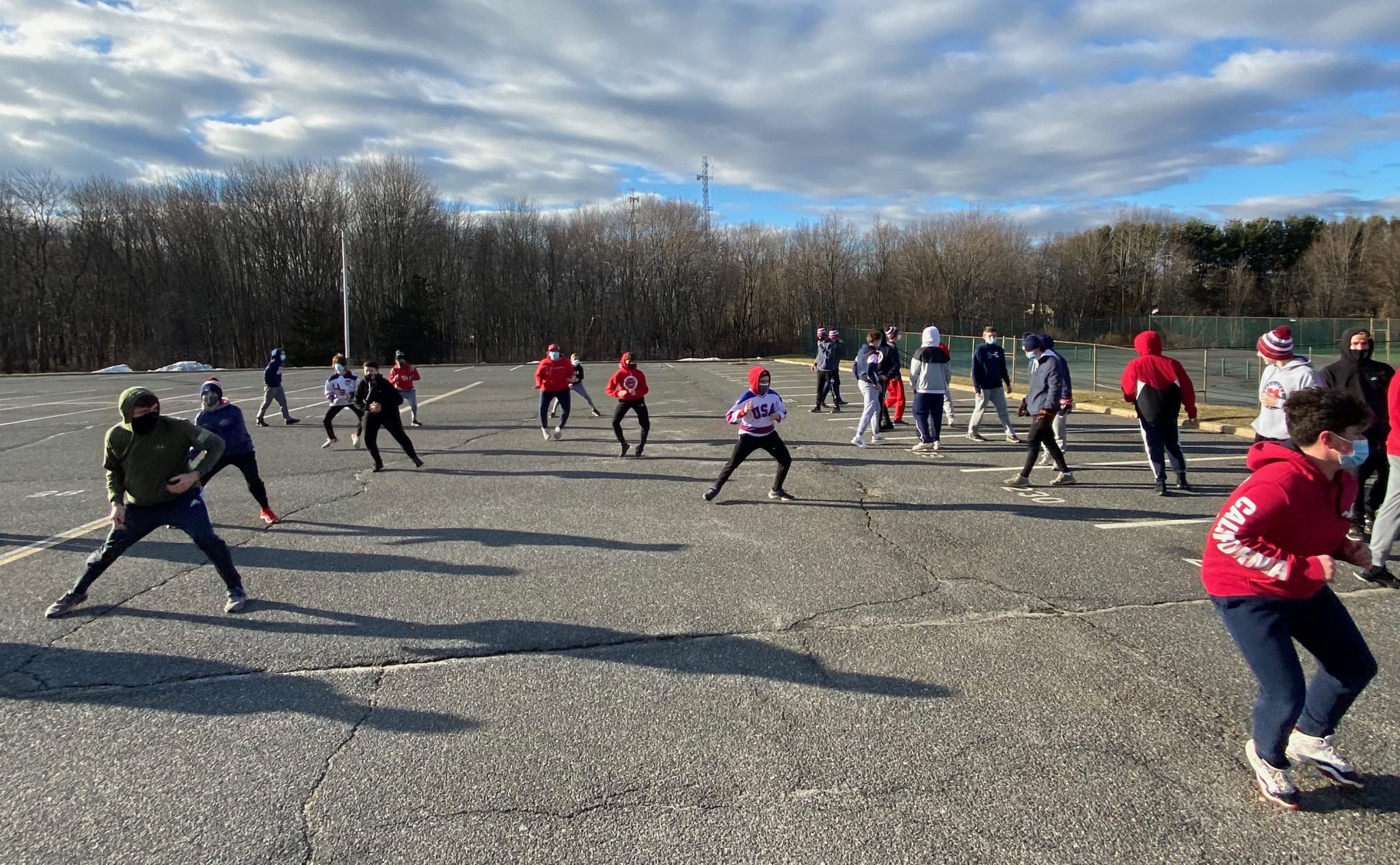 1 / 3
The Manalapan High School ice hockey team holds an outdoor practice in the school's parking lot on Jan. 6. The Braves will hold their first practice at Howell Ice Arena on Jan. 11. PHOTO COURTESY OF MATT INZERILLO

2 / 3
The Middletown High School South ice hockey team holds an outdoor practice at the school's turf over winter break. The Eagles will hit the ice for the first time this season at the Middletown Sports Complex on Jan. 11. PHOTO COURTESY OF ANDREW ROSENBLOOM

The cold air brushing against his face as he watched his Rumson-Fair Haven Regional High School ice hockey players skate on the ice for the first time on Jan. 4 felt amazing to the Bulldogs’ second-year coach Eric Zullo.

Months of waiting for a chance to get back on the ice at the Red Bank Armory Ice Complex with his players to build off a 16-3-3 campaign in 2020 had finally arrived.

“Seeing the kids on the ice again is the most important thing,” Zullo said in an interview this week. “We want to build off the season we just had and be in reach of a Shore Conference championship.”

Jan. 4 – the first Monday of 2021 – marked the first day high school ice hockey teams in New Jersey were permitted on the ice to practice in preparation for a season which is scheduled to be played during the ongoing coronavirus pandemic.

Now, teams will gear up to start regular season play in just over a week, while also having to adjust to protocols like not being able to use locker rooms and only being allowed to enter a rink at certain times before games and practices.

“Adversity doesn’t get in the way of our preparation,” Zullo said of his team’s motto for the season. “From the top down, we are modeling a way of wearing masks when we are off the ice and making sure we are doing everything we can to stay healthy.”

Dec. 14 marked the first day players could participate in outdoor practices or virtual workouts together.

The Manalapan High School ice hockey team went right to work in the school’s parking that day to prepare for the 2021 season.

Workouts consisted of speed, agility, and strength and conditioning training, plus walk-through sessions to review offensive and defensive systems for when the time comes to get on the ice.

“It was pretty much game on for us,” Manalapan Coach Matt Inzerillo said. “We had two to three practices a week and our guys were fully in. We had a great experience with it.”

Inzerillo looks at the unique circumstances in 2021 as a “blessing in disguise.”

Even though it has been challenging to get work done in outdoor practices, the gravity of the situation shows how much the players want to compete and it has helped bring them closer together with what the coach said are “great vibes” at practice.

First-year coach Andrew Rosenbloom began outdoor practices for his Middletown South High School ice hockey team at the school’s turf field during the winter break and said his players were eager to start their workouts.

The Eagles held virtual workouts to begin their preseason preparations and the players were given a workout program to complete on their own during the off-season.

Even though Rosenbloom is a first-year head coach, his six years as a coach in the program brings stability to a Middletown South squad that went 14-8-4 a year ago.

“It’s been a smoother transition than taking over a brand new team,” Rosenbloom said. “We have most of our team from last year returning. We are going to play each game like it’s the last one.”

Middletown South and its township rival Middletown North High School will both be able to start practicing on the ice at the Middletown Sports Complex on Jan. 11.

That is the same date all of the high schools associated with the Freehold Regional High School District can start having indoor practices because the district had fully remote instruction from Jan. 4-8.

Jackson Liberty High School and Jackson Memorial High School in Jackson will be joined by Point Pleasant Borough High School as a co-op team this season.

Teams can start playing regular season games on or after Jan. 15 and the season will run through March 6, according to a schedule authorized by the New Jersey State Interscholastic Athletic Association.

Zullo, Rosenbloom and Inzerillo said their players are hoping to make a runs at their respective division title. There will be North, South and Central divisions in the Shore Conference this year.

At the end of the day, the coaches and players are hoping to have a full season on the ice and to enjoy a season that is as “normal” as possible during the ongoing pandemic.

“It would almost be like a ‘we did it mentality’ because the conference and the teams around the state did everything they could to have a season,” Inzerillo said. “It’s a different year. We want the seniors to have as normal a season as they can.” 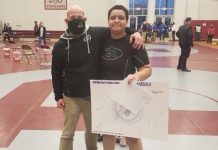