MILLSTONE – Gary Dorfman will serve as the mayor of Millstone Township in 2021.

Dorfman was elected mayor for a one-year term by his fellow Township Committee members during the Jan. 6 reorganization meeting of the governing body.

As the meeting began, new committee members Michael McLaughlin and Christopher Morris were sworn in to begin serving their first three-year terms.

Dorfman joined the committee in 2010 and previously served as mayor in 2018.

“We (on the governing body) have a very important role in our community,” he said. “We serve our citizens as individuals and we serve them on the behalf of the town as a whole.

“You will find that the toughest things we need to do are those things which sometimes are most valuable and beneficial to the whole, but some things have a challenging impact for certain individuals.

“We will all work together, use our best judgement and guidance, and always be guided in doing what is best for all.

“It’s always about the people we serve. It’s never about us. Millstone is a very special place. We have all chosen to live here from our own free will. It’s a quiet, rural-suburban residential community blessed with open spaces, peace and tranquility.

Grbelja was nominated to serve as deputy mayor for 2021. Grbelja voted for herself and was supported with “yes” votes from Dorfman and Morris.

Ferro and McLaughlin abstained from the deputy mayor’s vote without comment.

Grbelja joined the Township Committee in 2004 and is the longest-serving member of the governing body. She has served as mayor nine times, including eight consecutive years from 2006-13. 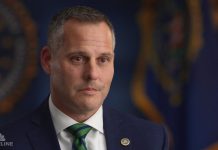