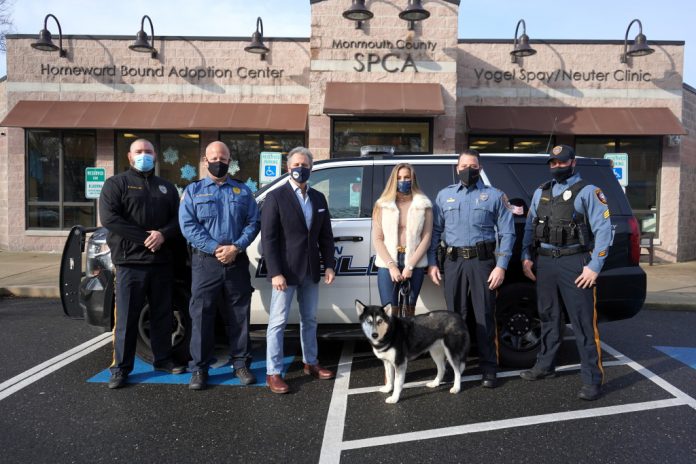 The Monmouth County Society for the Prevention of Cruelty to Animals (MCSPCA) has introduced a pilot program that places shelter dogs in police departments to serve as emotional support animals.

The Eatontown Police Department has become the first police department to partner with the shelter, with its chief, Bill Lucia, serving as the proud adopter of a dog named Tala, according to a press release from the MCSPCA.

“It is really such a simple concept when you think about it. Anybody can have a dog at home, but having a dog at work has proven to be very impactful in assisting officers coping with stressful situations. It has also had a significant impact on the overall morale of the department,” Lucia said.

Tala, a purebred husky, came to the MCSPCA on a transport and was originally rescued from a hoarding farm in the south. Tala lived outdoors with dozens of other dogs and rarely had the opportunity to interact with humans, according to the press release.

Tala’s life changed forever when she arrived in New Jersey and met Lucia, as she was finally able to express all of the love she was saving up during her years alone.

Tala has no formal service training yet, but she behaves in public settings, ignores distractions and stays near her handler.

When Tala is at the police station she can be seen running up and down the hallways, taking walks with her officer friends, or politely asking for treats with the signature husky “Ah-wooo,” according to the press release.

For the officers of the Eatontown Police Department, having Tala at headquarters has been valuable. Several times each week, officers will return from high-stress calls and seek out Tala for comfort.

“Tala allows the officers to relax and de-stress in a way they may not even realize, while not drawing attention to themselves,” Lucia said. “Nobody thinks twice about an officer taking a dog for a walk, but that walk allows them to clear their head, calm down, or just escape for a little bit. It’s also great for the dogs because we can provide older dogs that are usually harder to adopt a great home. It really is a win-win.”

MCSPCA Executive Director Ross Licitra said, “We are tremendously proud to launch this program that not only gives a home and family to a shelter dog, but also supports our local police. We are hopeful for this program to grow into many successful, mutually beneficial relationships.”

Interested parties may contact the shelter for more information about the placement program by emailing info@monmouthcountyspca.org or calling 732-542-0040, ext. 7.