RED BANK – Councilman Hazim Yassin has been elected by his fellow members of the governing body to serve as president of the Borough Council in Red Bank for 2021.

The borough’s annual reorganization meeting on Jan. 1 was held in a virtual manner due to the ongoing coronavirus pandemic.

Incumbent Democratic councilmen Michael Ballard and Edward Zipprich, who were the winning candidates in the November election, were sworn in to begin serving new three-year terms prior to the meeting. A swearing-in ceremony was conducted at Marine Park.

Yassin, who has served on the council since 2019, was nominated by Zipprich to serve as council president for 2021. Councilwoman Kathy Horgan seconded the nomination. Yassin was elected in an unanimous vote by Ballard, Horgan, Zipprich, Councilwoman Kate Triggiano, Councilman Erik Yngstrom and himself.

Democrats hold all six council seats and the mayor’s office in Red Bank.

The appointments were confirmed by the council members through a resolution. 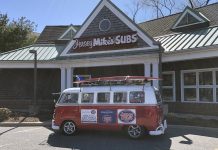