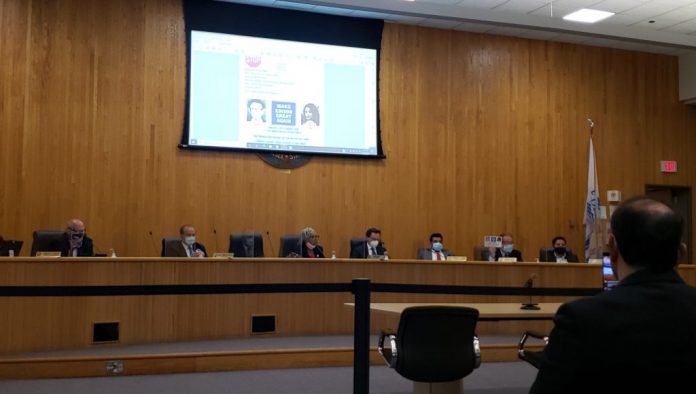 EDISON – Up until recently it was not clear if the New Jersey Attorney General’s office was investigating the racist flier that was distributed by mail during the 2017 Edison Township Public Schools Board of Education election.

During a Committee of the Whole meeting on Jan. 20, Council President Robert Diehl said Mayor Thomas Lankey received a letter from the Middlesex County Prosecutor’s Office informing the township the state AG’s Office has picked up the case and has assigned a detective to the case.

“Last week we sent the AG’s Office and detective a letter asking for the status of the investigation,” he said “We also stated we were in possession of information we believed would be helpful. At this time we are awaiting a response.”

Diehl said they had expected to receive additional information from Councilman Ajay Patil at the recent Committee of the Whole meeting.

Patil had met with Diehl, Councilman Alvaro Gomez and United States Postal Inspector David Comer on Nov. 5. He had relayed information stating he allegedly knew who was responsible for the flier and shared names and roles of people allegedly involved.

Patil also stated he was “not a creator, a facilitator, he did not distribute the flier … he was more or less a bystander,” Diehl said.

The committee welcomed Patil to share the information with the community. Rather than testify under oath Patil submitted an official statement before the Committee of the Whole meeting on Jan. 20. Diehl said the official statement and the information relayed at the meeting on Nov. 5 have caused a bit of confusion because they are allegedly different.

Patil has told the committee he has retained legal counsel and would like to set up a meeting, Diehl said.

“We feel at this time that’s the best course of action to meet with Councilman Patil and give him an opportunity to share with us what he actually knows,” Diehl said, adding they will set up a meeting as early as next week.

At a Committee of the Whole meeting in November, the committee read Comer’s report verbatim, which named six members of the community who were allegedly involved in assembling or mailing the flier: Satish Poondi, the legal adviser for the Indian Business Association who previously served on the Mayor’s Advisory Committee on Community Relations in Edison; Raj Bhagia; Mohin Patel; Patil; Board of Education member Jerry Shi; and Shariq Ahmad, the former chairman of the Edison Democratic Organization.