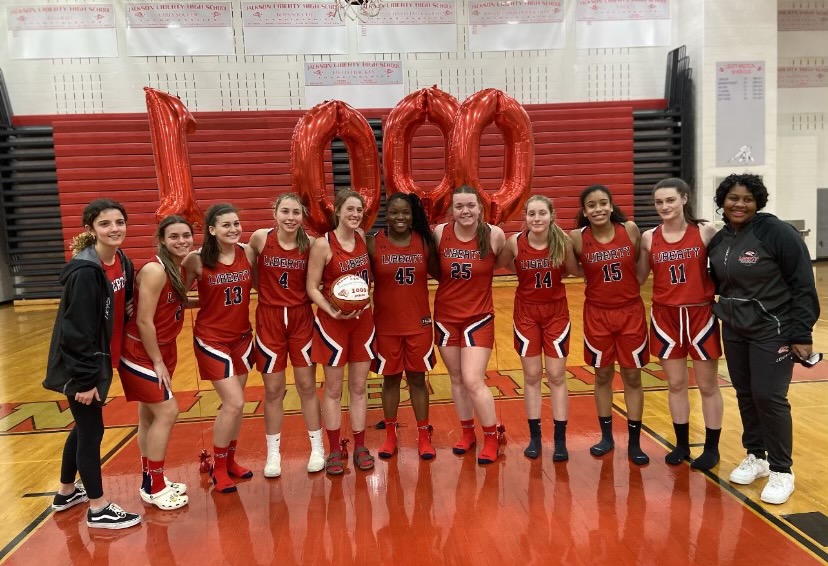 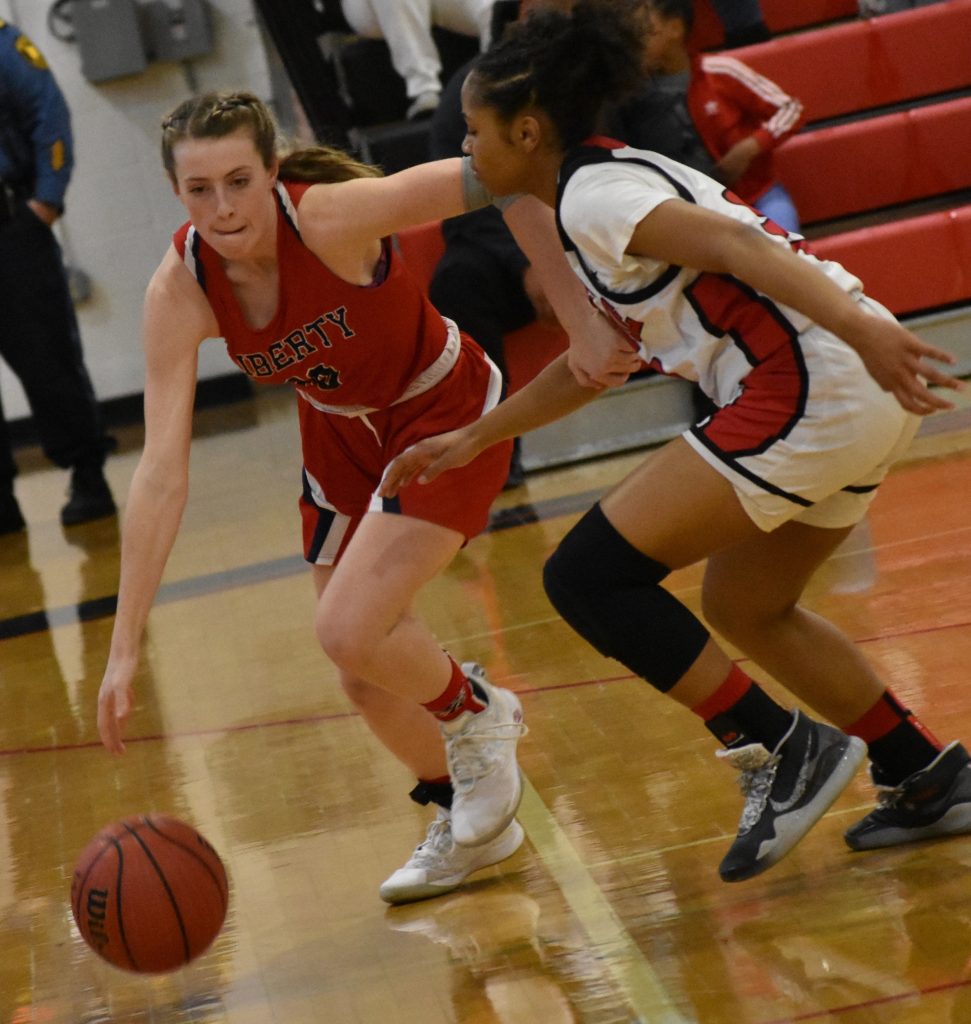 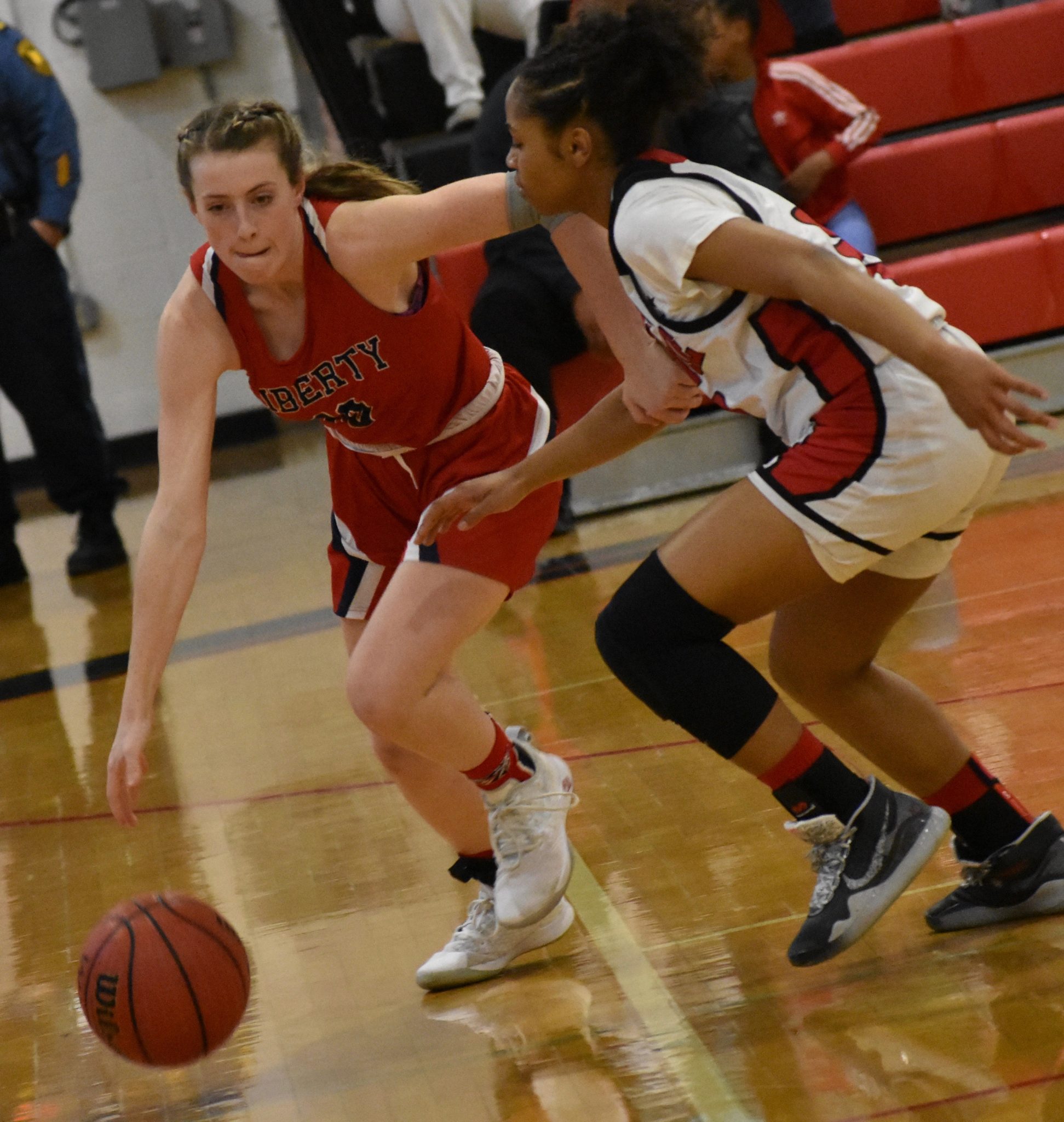 After scoring 19 points in the first half, Carney knew she was very close to scoring her 1,000th career point and making history as the first girls’ basketball player in school history to achieve that basketball milestone. Jackson Liberty opened in September 2006.

It turned out Carney only needed one more point to reach 1,000. Just like she had practiced during the off-season, Carney drained her first free throw attempt to cement her trailblazer status and become the first Jackson Liberty girls basketball player to reach the 1,000-point mark.

“I couldn’t believe it happened. It felt like a dream,” Carney said. “It’s been something I have been working so hard for and it finally happened. The girls all hugged me and said they were proud of me.”

Their words meant a lot to Carney as her teammates and coaches celebrated her achievement on the court.

“You don’t really hear that stuff a lot, so when people do say that, it means everything you worked on and worked through was worth it,” Carney said. “It’s a really good feeling.”

The memorable moment was something Carney was hoping she would get a chance to experience after she trained during the off-season and waited to hear what the fate of the 2020-21 high school basketball season would be as the coronavirus pandemic continued in New Jersey.

Administrators at the New Jersey State Interscholastic Athletic Association eventually determined teams could play a 15-game regular season schedule, beginning after Jan. 1. There will not be a state tournament contested this season.

Carney, who has committed to play at Adelphi University in New York next season, knew her days on the court would not end, but she wanted one last run on the hardwood with her teammates at Jackson Liberty.

Carney was a big part of the Lions’ postseason run as she scored 59 points in three tournament games, including 23 points in the win over Red Bank Regional.

“She’s turned heads for Jackson Liberty,” Coach Alaina Hearon said of Carney. “People come to high school to compete and set records and she has set that for us. She has developed into a very skilled player.”

Hearon has been along for the ride throughout Carney’s career. She was an assistant varsity coach during Carney’s freshman and sophomore years, before moving into the head coach’s position for Carney’s junior and senior seasons.

Having Carney and sophomore Ariana Broughton back in the starting lineup and after adding freshman Chelsea Lavezzo, Hearon believes her team can notch another successful season during this year’s abbreviated campaign.

“Last year was a confidence builder for our program,” Hearon said. “Our goal (this year) is to play 15 games and be competitive in all of them. We want to dominate our pod as much as we can.”

After five games, Jackson Liberty had a 2-3 record.

Carney scored a season-high 23 points in a victory over Freehold High School on Feb. 3. She scored 21 points in the team’s 55-47 victory over Southern Regional on Feb. 5, including her milestone 1,000th career point.

Because family members and friends were not permitted to attend the Southern Regional game because of COVID-19 restrictions that were still in place, Broughton and fellow teammate Kara Vashey made a special video to honor Carney and showed the video when the team returned to Jackson Liberty.

“They still made it special even though people couldn’t come to the game,” Carney said. “It was so nice of them to do that. It’s a video I’ll have forever.”

Carney said when the Lions arrived back at school, her parents were on hand to greet her and to share a hug that captured the joy of her accomplishment.

With possible plans of being a school guidance counselor or a therapist someday, Carney said she “loves” Jackson Liberty and would definitely come back to be a faculty member in the future.

She said she is very happy she went to Jackson Liberty and for the accomplishments she was able to achieve during her high school career.

Carney is most proud of helping to put the Jackson Liberty girls basketball program on the map in the Shore Conference along with her teammates. She said she believes the players coming up through the program will keep that trend going.

“We wanted to make people look at our program differently and change the way they viewed us and I’ll never forget that we did that,” Carney said.