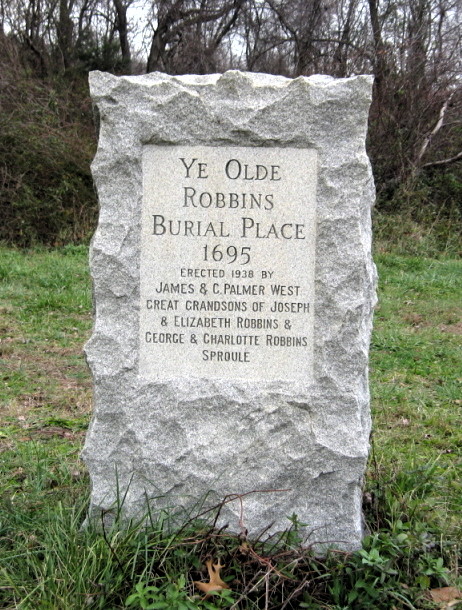 It had been raining the entire trip from Havre de Grace, Md., to Allentown in November 2004. I parked near the granite marker on the side of New Canton-Stone Tavern Road (Route 524) and looked for the trailhead. Finding it, I made my way up the hill trying to avoid falling into the briers that lined the trail.

Rough stones, arranged in rows, appeared as I reached the top of the hill, and beyond them white headstones sprouted from the ground like ghosts lending a haunting appearance to the scene.

The graves were spread over what I would discover later was a 1-acre plot, seemingly too large for a family burial site, but typical of a churchyard cemetery; but no remains of a church could be found.

The latter, Ye Olde Robbins Burial Place, was inscribed on the granite stone I had passed heading to the trailhead. The stone was erected in 1938 by twin brothers James and Clayton Palmer West who were descendants of Randal Robbins Sr., who is my fourth great-grandfather.

I was not the first to discover this quiet and eerie resting place for more than 200 souls.
According to local newspaper stories, the mysterious cemetery in the woods had been discovered and rediscovered numerous times since the headstone of Deborah Lincoln, President Abraham Lincoln’s second great aunt, was uncovered during America’s centennial in 1876.

The first deed designating the Robins Burial Ground was created in 1762 after Daniel Robins, the grandson of Daniel Robins Sr., the first settler, through Moses Robins, established a deed of trust for the family.

A subsequent deed dated May 17, 1923 transferred the burial ground to George B. Robbins, son of Aaron H. Robbins and Charles Percy Hutchinson, the son of Barton Hutchinson.

Finally, on April 3, 1943, the deed was transferred to James West, Neil West, C. Palmer West, Mollie West Flock, John Field and Franklin G. Rue, descendants of Randal Robbins Sr.
In 1965-66, the New Jersey Department of Environmental Protection (DEP) Green Acres program acquired the properties surrounding the burial ground to form the Assunpink Wildlife Management Area and over the years many people assumed the state had acquired the burial ground, too.

The 2004 visit to the burial ground started a process to determine the ownership of the property. My interest in my ancestors began in 1971 while researching my family history for a high school paper.

In 2004, I discovered my ancestors settled in the Allentown area and were buried in the Robbins Burial Ground.

When I inquired as to who maintains the property, I was told by the DEP to check the deed. This led me on my 16-year pursuit to answer the question of whether the Green Acres program actually had control of the property.

In 2020, I submitted an Open Public Records Act request and received a response from the Bureau of Legal Services and Stewardship in the DEP’s Green Acres program. They could not find a deed to the burial ground and concluded that the descendants of the trustees could still be the owners of that 1-acre parcel.

My next task was to trace the descendants of the last known trustees. I made contact with Beverly Kennedy, a West descendant, who has all the deeds – including the first deed of 1762 with the thumbprint of Daniel Robins, the originator of the deed.

She indicated that the burial ground was not turned over to the state, and according to Mrs. Kennedy, the 1943 deed with trustee Neil West, her grandfather, was the last deed.

I am currently in the process of forming a nonprofit organization to take control of the property in order to properly maintain it.

A cleanup is being organized for the early part of March to begin the process of returning the burial ground to a state of respect.