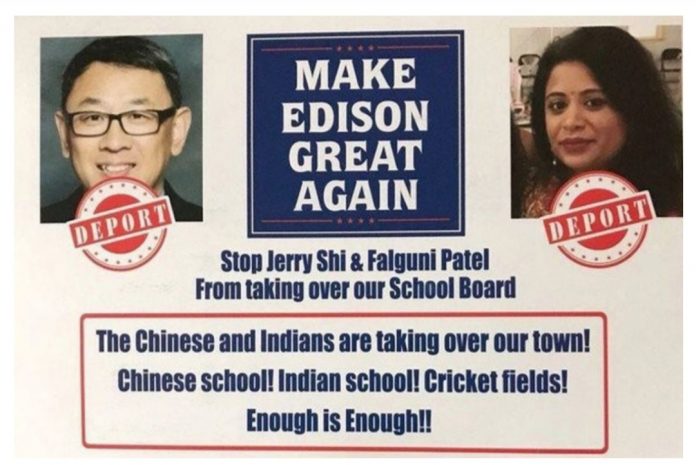 EDISON – Mayor Thomas Lankey and Councilman Robert Diehl have appealed to the New Jersey Attorney General’s office and/or the Middlesex County Prosecutor’s Office to step in and bring those responsible for the racist flier that was distributed by mail during the 2017 Edison Township Public Schools Board of Education election to justice.

Lankey and Diehl expressed frustration with the lack of movement in the case at a press conference on March 3.

“It is frustrating to have this event that occurred three years ago and to this day not have uncovered and determined who is responsible,” Lankey said. “I applaud our [Township] Council and Committee of the Whole. Without them, honestly, I don’t think we would have gotten to where we are today and we just need to help them bring it over the goal line, to finish.”

In January, Diehl said the mayor received a letter from the Middlesex County Prosecutor’s Office informing the township the state AG’s Office had picked up the case and has assigned a detective to the case.

Since May 2019, the Township Council, through a Committee of the Whole, has been conducting its own investigation through fact-finding public meetings, questioning candidates from the 2017 Board of Education (BOE), Township Council and mayoral elections, people who helped with the campaigns, and people involved in the investigation. All of the people have been subpoenaed to appear before the committee.

At a Committee of the Whole meeting in November 2020, the committee read United States Postal Inspector David Comer’s report verbatim, which named six members of the community who were allegedly involved in assembling or mailing the flier: Satish Poondi, the legal adviser for the Indian Business Association who previously served on the Mayor’s Advisory Committee on Community Relations in Edison; Raj Bhagia; Mohin Patel, who is now an Edison BOE member; Councilman Ajay Patil; BOE member Jerry Shi; and Shariq Ahmad, the former chairman of the Edison Democratic Organization.

Lankey called for the press conference after an audio recording obtained by the media was released of a conversation among Patil; Chandrakant Patel, founder of Chowpatty Restaurant in Iselin; and Indian Business Association president Dhiren Amin.

Patel said each of the six individuals came into his restaurant carrying boxes that included large postcards, according to reports. He reportedly asked Aloysius and Joseph Dsouza, who were working at the restaurant, to help them with the mailing. Aloysius Dsouza’s fingerprints were found on one mailing that was sent for testing at the forensic laboratory, according to reports.

In the audio, Patil said he was not involved and learned about the fliers three days before the November election in 2017 after Poondi asked him to come by Mahesh Bhagia’s home. He alleged Bhagia and Shi had already put 1,500 labels on the fliers and Poondi, in the recording, told him they were moving forward with distributing the flier.

In the recording, Patil told them he thought the whole idea was “nonsense” and questioned the legality of the flier. He alleged Poondi claimed there was no violation.

Diehl had said Patil told them the architects of the racial flier were allegedly Poondi, Raj Bhagia and Mahesh Bhagia, who was not named in the report. In the recording, he said Shi was aware of the fliers.

Mahesh Bhagia is the current Edison Democratic municipal chairman and had worked as an aide to Lankey. On Feb. 24, Bhagia secured the local Democratic Party’s endorsement for mayor. He defeated Edison Councilman Richard Brescher and former Councilwoman Sapana Shah for the endorsement.

Lankey in a statement said he was “appalled” by the audio recording “that detailed the conspiracy by Edison elected officials and prominent members of our community to sow division and racial discord in our town.

“Now, audio recordings reveal that members of our governing body and their allies knew full-well who was responsible,” he said. “The AG’s Office investigation into how a racist flier was circulated has been allegedly going on for more than three years but, to date, no one has been held accountable for this horrific hate crime. Enough is enough. I call on the Middlesex County prosecutor to take over this long-stagnant investigation, so that the perpetrators can finally be held accountable and so that our community can move past this horrific incident and begin the difficult process of healing.”

Diehl said he had a brief conversation with Middlesex County Prosecutor Yolanda Ciccone a couple of weeks ago. He said she assured him at time the AG’s office was working on the case.

Lankey and Diehl said they have no reason to not believe what Patil has said in the recording and at the meeting.

“Until I have reason not to believe, I assume the councilman would be telling the truth,” Lankey said.

Diehl said Patil approached the Committee of the Whole, which he believed to be in good faith to them what he believed was the story behind the flier and who was involved.

“I have to take him at his word at this time,” he said.

After the release of the audio recording, Councilman Sam Joshi called on Bhagia to resign from his position in the Democratic Party and drop out of the race for mayor.

“The racist mailer that was distributed in 2017 shook our community to its core, and for nearly four years we have all hungered for justice to be done and for closure from this painful episode to arrive,” Joshi said. “After these new revelations, it is absolutely clear that Edison Democratic Chairman and Mayoral candidate Mahesh Bhagia played a key role in the planning and distributing of this vile piece of racist filth, as well as that he has been lying about his involvement this entire time. As a member of the Township Council committee investigating this matter, I have been aware of this recording for some time, but I have been unable to speak about it publicly due to the ongoing review. Now that it is out in the open, I feel that I must speak out on it to ensure that Edison residents are aware of this disgraceful act committed by Chairman Bhagia and his associates leading into the upcoming election.”

Bhagia did not respond to a request for comment.

Diehl spearheads the committee with Gomez and Joshi.