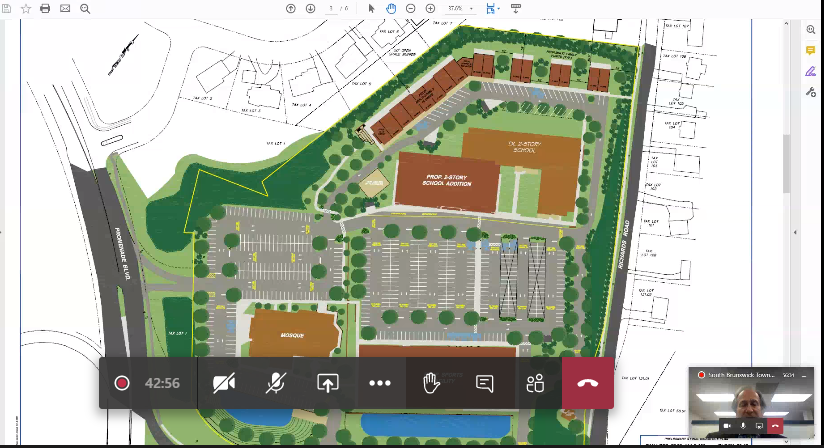 SOUTH BRUNSWICK – After another three hours of contentious debate, the members of the South Brunswick Zoning Board of Adjustment approved senior housing, a sports facility and associated improvements at the Islamic Society of Central Jersey (ISCJ).

The ISCJ sought amended preliminary and amended final site plan approval with use and bulk variance approval to permit a 44,880-square-foot sports facility and 24 senior housing units on a 5.5-acre lot adjacent to its mosque at 4145 Route 1 in the Monmouth Junction section of South Brunswick.

The zoning board meeting on March 4 was the sixth meeting on the application since November 2019.

Board members consistently debated the size of the lot and if all the proposed uses could fit properly.

Upon voting “yes,” Chairman Marty Hammer, who has been a board member for more than 20 years, said he supported the housing element when it went before the board for a vote in 2006 – although it was denied at the time because of proposed access from Richard Road, a nearby residential neighborhood.

As part of the 2006 vote, the applicant obtained approval for a 40,000-square-foot office building in the OP zone, and a bi-level parking garage. Neither were built. The housing was reduced from 32 to 22 units.

Originally in 2002, approval was granted for 32 senior residences and a 52,000-square-foot school, plus a funeral home and density variances, the applicant’s attorney, Steve Hambro, said.

“We have taken great pains to reduce the impacts” over the years, Hambro said.

“It’s not a perfect solution, but I think [the current options are] a better plan than when we started looking at this a year ago,” Hammer said.

Lepore said the application was “thorough,” the traffic impacts will be minimal, there is sufficient parking, the buffering from the adjacent properties is “generous” and “they need the residential units for their site to work.”

“I don’t think it looks overdone. There is a key to each one of those uses. It’s balanced,” he said.

Bharat Patel said adding a sports facility and expanding the school helps ISCJ support itself, since the group is a nonprofit, charitable, religious organization.

“The growth of a school, I do not see as a problem,” he said, recalling when the students were first taught inside trailers and bused back and forth from a building behind TJ Maxx. “I don’t see much of a detriment.”

Shivam Patel said, in relation to the size of the application, that if there was no space to fit all the uses, putting the plans on paper would not have been possible; plus, there are sufficient buffers from the neighboring properties.

“The application is trying to satisfy the needs of the public to the best of their ability,” he said.

Vitone took issue with the project not meeting criteria for site suitability.

Troccoli, who said he was “torn,” ultimately decided that though certain parts were good, and the proposed uses were less intense than an office building and the parking garage that were originally suggested for the site, he was “not crazy about” having a for-profit sports facility on the property.

His biggest issue was including four uses on a 16-acre lot, and he said the density of the housing is a “red herring” no one addressed.

Kevin Bifulco was absent from the meeting; Conover was Alternate No. 1. Amir Farhat, Scott Weyd and James Jacobs attended the meeting, but were ineligible to vote.

“I do believe in the long run this will be a benefit to the community, and to the township,” Hambro said after the vote.

During the Feb. 4 meeting, Robert Sive said the plan was reduced from 32 to 24 units at the previous meeting, with 20 two-bedroom units and four one-bedroom units proposed, with 40 feet of space between every two units. The townhouse-style homes would accommodate single families; the original application called for multi-family units.

He said the density would be 4.3 units per acre in the RM3 zone.

A total of 48 parking spots would be available between the existing school and the residential area.

Landscape screening would include 144 shade trees, 426 evergreen trees, 297 shrubs and 465 flowers/ground coverings. The applicant must begin planting by May 31, per the conditions.

During prior meetings, residents took issue with the lot being too small to accommodate a mosque, a school, a sports facility and housing, especially since the property borders neighborhoods on Richard Road and Essex Drive.

Board members debated how many of the residents’ comments were taken into account.

Jacobs, on the other hand, said if the board members truly took to heart what the residents want, they would not approve the housing element.

“You are taking away from the integrity of that neighborhood,” he said. “I refuse to believe they can meet or make it nice enough to what people already have.”

He also shared concern that the school will eventually be expanded again by building on top of the sports facility.

However, Hammer said this was a case of NIMBY: Not In My Back Yard. Board members said residents on Richard Road and Essex Drive do not want anything added to the site, regardless of the use.

“When you knowingly buy next to a religious facility, religious organizations have to thrive or die,” he said.