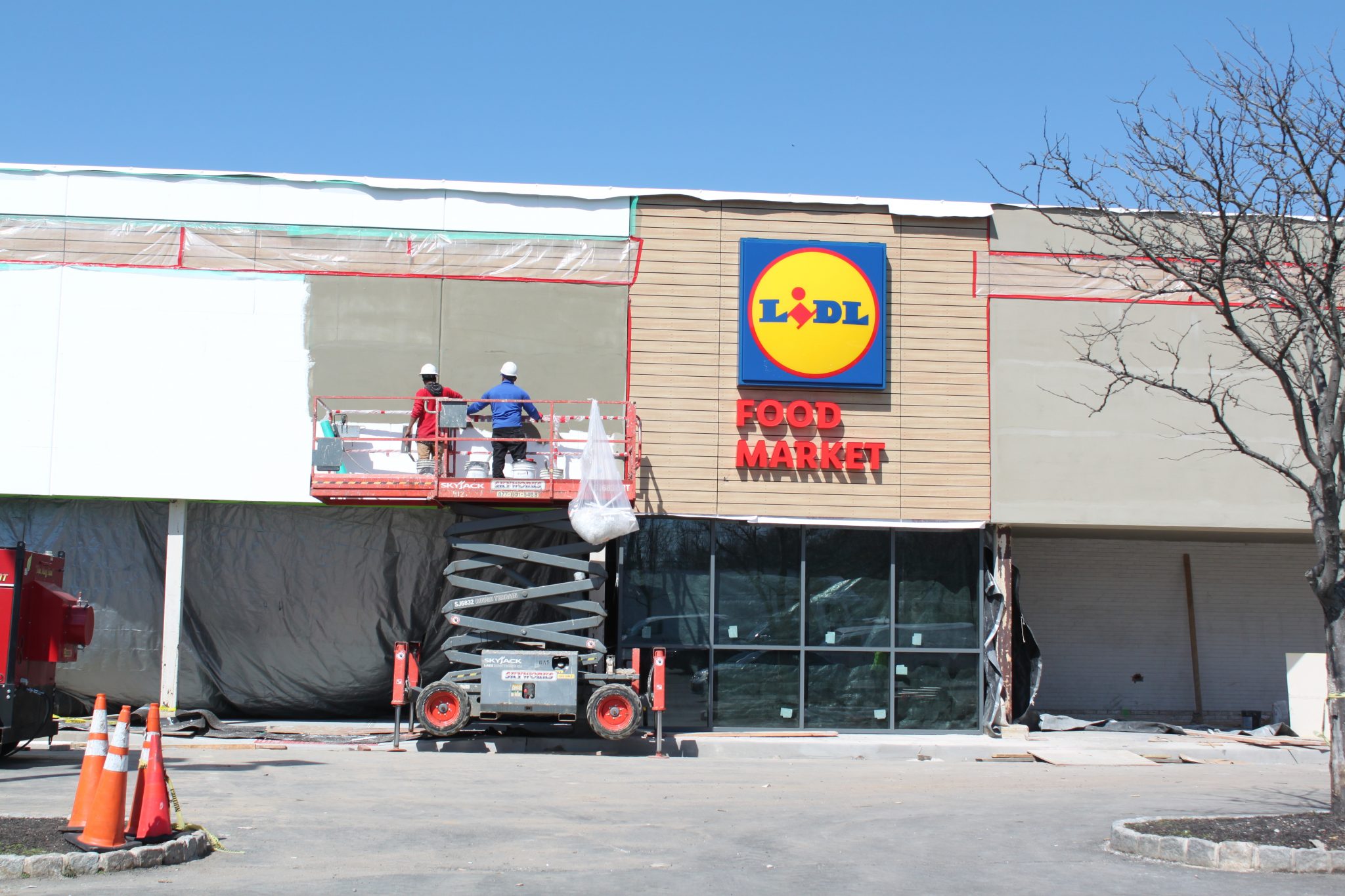 The Lidl grocery store at the Lawrence Shopping Center is expected to open this summer, and a grand opening date – which has not yet been set – will be announced as the project nears completion.

Work on the Lidl grocery store has begun to pick up in the last few months. The blue and yellow “Lidl” corporate sign has been installed above the main entrance, which is a glass-enclosed lobby.

Renovation work has occurred in spurts since demolition on the vacant space began in August 2020. The former ACME grocery store space had been empty since 2018, when the store’s lease expired at the shopping center at 2495 Brunswick Pike.

The new Lidl grocery store will occupy one of 49 retail spaces at the Lawrence Shopping Center, which is anchored by Staples and the Burlington Coat Factory. An updated sign at the Brunswick Pike entrance to the shopping center lists Lidl, AutoZone, Dollar Tree and several other businesses.

Across the parking lot from the Lidl grocery store, ironworkers have been erecting the steel framework on top of the foundation of the former Wells Fargo Bank building.

The former bank building was dismantled in preparation for a Starbucks coffee shop and an Aspen Dental practice. It is not known when the work will be completed and the businesses will open their doors.

Lidl, Starbucks and Aspen Dental are joining the growing list of businesses that have begun to fill the shopping center. Several stores have leased space and opened their doors for business in the past two years.

The Dollar Tree discount store, which opened in August 2020, moved across Brunswick Pike from its former location. The store occupied about 11,000 square feet.

The AutoZone automotive parts store has opened for business. It is located next to the Dollar Tree store. The two businesses occupy part of the space that was formerly occupied by the CVS drug store chain.

The Island Sports Bar and Grill opened for business in late 2020 in the space that was occupied by the Fusion House restaurant. Next door to the Island Bar and Grill is the Heavenly Hounds dog training business.

City Electric Supply, which is a wholesale electric supply company, has taken over the space that formerly housed the R&S Strauss auto supply store in the same one-story building as Island Sports Bar and Grill and Heavenly Hounds.

The former Huffman Koos furniture store was demolished in January 2020 to make way for the construction of the LA Fitness gym, but that project has been put on hold. The parking lot has been paved.

There are still a few vacant store fronts, and signs advertising their availability have been taped to the storefront windows.

The prior owner, wbcmt 2007-c33 Brunswick Pike LLC, acquired the Lawrence Shopping Center at a Mercer County sheriff’s sale in 2013. Lawrence Center LLC, which owned the shopping center, defaulted on a $39.5 million loan, which led to the sheriff’s sale to pay off the debt.

Among the original stores at the Lawrence Shopping Center were W.T. Grant, which was a 5- and 10-cent store and a forerunner to today’s “dollar” stores; Dunham’s Department store, which occupied the Burlington Coat Factory store; the Pantry Pride grocery store; and Lawrence Liquors, according to records on file at the Lawrence Township Tax Assessor’s Office.