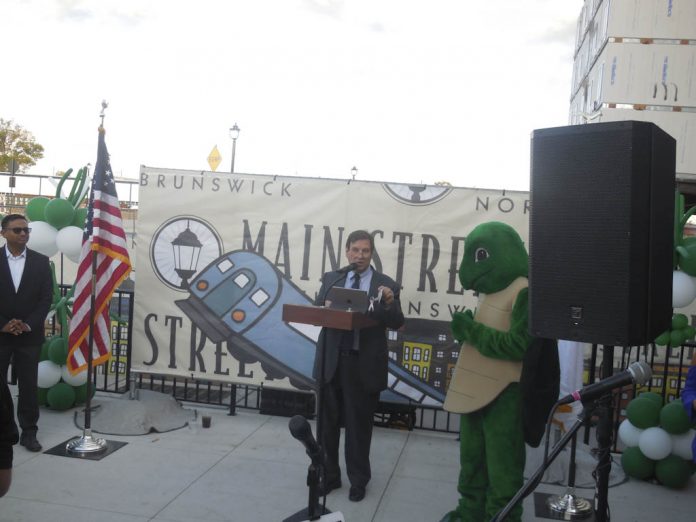 NORTH BRUNSWICK – Traveling from North Brunswick to MetLife Stadium and American Dream in East Rutherford, or to Yankee Stadium in the Bronx, or to Philadelphia’s 30th Street Station, or to Boston or Washington, D.C., will be possible in the future.

H. James Polos, the executive director of the MCIA, said WSP is “an invaluable world-class partner.”

WSP is currently involved with New Jersey Transit and Amtrak on other projects, and worked on the first subway in New York City in 1870.

State, county and local officials announced on Oct. 14, 2020, that NJ Transit had approved the release of a Request for Proposal for the design and engineering of a train station to be constructed on Main Street off Route 1 north in North Brunswick.

Polos said the decision to hire for the $3.199 million Phase I and Phase II project was unanimous among MCIA members, as WSP was most consistent with the Request for Proposal in terms of project management plans, baseline schedule with monthly reports, and cost.

Middlesex County, through the MCIA, will serve as project manager through an agreement with NJ Transit for the design and construction of the train station, which was announced on Oct. 30, 2019. This is the first time a county has been allowed to manage the construction of a crucial infrastructure project.

WSP and five subconsultants were selected this week as the design and engineering partner, “a major leap forward for this project,” said Shanti Narra, Middlesex County commissioner, former North Brunswick councilwoman and current North Brunswick resident. “This is a critically needed transportation hub on the Northeast Corridor.”

Polos said Phase I preliminary design and environmental review will take a few months. Phase II would take about 12 months. Thus, it will be at least 18 months until the project is at 30% completion, he said.

Polos said after the design phase, officials can better determine an expected completion date for the project.

Then, NJ Transit and Amtrak will work on new train schedules.

“We want this project built sooner than later, but we are not going to sacrifice safety and quality,” Narra said. “This is a regional project and the interest has been enormous.”

The train station/transit village project began 15 years ago as a means to offer relief to one of the state’s busiest rail lines, provide quicker commutes, reduce traffic along Route 1, relieve congestion at the New Brunswick and Jersey Avenue train stations, bring revenue and ratables to the area, add construction and permanent jobs, and provide an environmentally safe alternative to driving.

The former 212-acre Johnson & Johnson complex across from Commerce Boulevard on Route 1 in North Brunswick was converted to a transit-oriented development, which Narra said she had voted for, and is now part of Middlesex County’s Destination 2040 initiative as a future-forward growth strategy, she said.

“Despite the challenges of the past year, the MCIA has continued to move this project forward,” Narra said.

Afterward, he said, “We thank Middlesex County, the MCIA, the New Jersey Department of Transportation (DOT) and NJ Transit for their continued partnership in this much-needed train station that will bring so many benefits to our municipality. North Brunswick looks forward to continuing to work with these partners, now joined by WSP USA, to move this project forward in a swift fashion.”

Diane Gutierrez-Scaccetti, DOT commissioner, said New Jersey is “built on the fabric of its communities” and “we are a state of neighborhoods.”

“We recognize who our customers are and we recognize the importance of serving them,” she said.

She said the area surrounding the North Brunswick train station, which includes residential, retail, restaurants and a hotel, is a “new neighborhood” which makes for a safe place to live, work and play, and the train station will reflect the community it serves.

Kevin Corbett, president and CEO of NJ Transit, said this rail line is the “lifeblood” between New York and Philadelphia.

He noted other ongoing NJ Transit projects, such as the Raritan bridge replacement, improvements to the County Yard operated by Delco on the North Brunswick-New Brunswick border, upgrades to the Perth Amboy station, new elevators and a renovated waiting room at the New Brunswick station, and increased stops at the Avenel station.

“I hope the people of Middlesex are really seeing improvements to service,” he said.

In regard to the North Brunswick train station, Michael O’Neill, project manager from WSP, said there will be many environmentally sensitive features, such as LED lighting, environmentally friendly cleaning supplies and eco-friendly materials.

On Oct. 28, 2016, officials announced the receipt of $50 million from the state Transportation Trust Fund for the project. Middlesex County officials pledged $20 million to add a station stop at the former J&J site.

Garden Homes Development, which has been developing the MainStreetNB project since 2006, began its vision for a transit village and associated train station in 2006.

Currently, a Target, a Costco with a gas station, a drive-up Panera Bread, a Marriott and a Greene Turtle are on the property, along with condominium units.