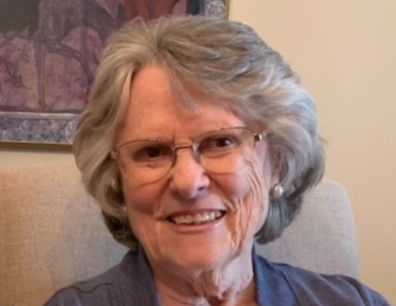 Jane Willey Swartzentruber died peacefully on March 28, 2021 in Moorestown, New Jersey at the age of 91.

Born in Chicago, Illinois on July 7, 1929, she spent her early life in Goshen, Indiana, graduating from Goshen High School in 1947 and Goshen College in 1951. She met her husband, Orley, when she was accompanying a Goshen College choir in which he was singing. During their 69-year marriage, Jane devoted herself to supporting Orley in his mission work in Europe, and his scholarly and pastoral work in Princeton, New Jersey, where she made their home and raised their four children. A faithful member of All Saints’ Church, where Orley was Vicar, and then Rector, she especially enjoyed her position in the alto section of the choir. Jane joined the faculty of Stuart Country Day School of the Sacred Heart in 1967, where she taught French for 25 years, ultimately becoming head of the
Romance Language Department.

She and Orley retired to Florida in 1993. They found a welcoming community within the Church of the Redeemer in Sarasota. Jane, an avid and critical reader, particularly enjoyed her time with their Women’s Book Club. In 2016 she and Orley made their final move to the Evergreens in Moorestown, NJ to be closer to their children.

Jane was predeceased by Orley, who died in 2019. She is survived by her four children, Anne Lewis, Emily Urquhart, Francine Storck, and Eric Swartzentruber, their respective spouses, Jay, Peter, Jonathan, and Johanna, and seven grandchildren. All of their lives were enriched and enlivened by her brilliant mind, her devastating wit, her devotion to family, and the example she set of excellence in every pursuit. She will be irreplaceable across the Scrabble board.

A private funeral service and interment are planned.