The one-mile stretch on Route 206 from Doctor’s Way to Valley Road is “up to bat” for expansion, as Gov. Phil Murphy stated at the groundbreaking ceremony of the project on April 27 in Hillsborough.

Route 206 will be widened into four lanes between Doctor’s Way and Valley Road and brings Hillsborough Township and the surrounding communities one step closer to finishing up the entire Route 206 bypass.

The $41 million federally funded project will help enhance safety and ease traffic congestion for residents and travelers of Route 206 and is slated to be finished by the summer of 2024.

New traffic lights, a median barrier and jughandles are all part of the Route 206 road-widening project between Doctor’s Way and Valley Road, which will be done in three phases and mostly worked on at night to impact less residents.

These fixtures will eliminate left turns to and from properties located along Route 206 and will direct turns onto newly signalized intersections and jughandles.

“The widening project has been our focus not just for a couple of years but for decades,” said Hillsborough Township Mayor Shawn Lipiani at the ceremony. “I look forward to the completion of the entire project which will bring immediate relief to Hillsborough and our residents.”

To begin the festivities, Murphy commended local officials for their efforts to make the Route 206 infrastructure project possible to provide residents with a “strong and resilient future,” even calling Hillsborough one of the state’s “gemstone communities.”

“The old 206 was not up to the task,” Murphy said. “A two-lane highway is not going to cut it in the 21st century. Over the past decade, through both federal and state funding, the New Jersey Department of Transportation has been undertaking a vicious project to alleviate the congestion on this roadway to make travel not only efficient but safer.

“This work will also allow the township to grow in a way that allows it to keep the neighborhood feel that is the reason why so many new families have chosen to call Hillsborough home,” he said.

During her speech, Gutierrez-Scaccetti spoke about how the project will make Route 206 safer to drive on for the over 30,000 vehicles that are said to travel on the highway per day.

Gutierrez-Scaccetti also announced that later this spring the 3.6-mile Route 206 bypass from Old Somerville Road to Mountain View Road will be open to traffic.

Lipani added afterward that he looks forward to celebrating the opening of the new bypass, scheduled to occur this June.

“The Route 206 Doctor’s Way to Valley Road project is just a piece of a much larger investment that the NJDOT has made to improve the quality of life here in Hillsborough,” Gutierrez-Scaccetti said. “It will tie into the Route 206-Hillsborough bypass which will be open to traffic this spring.”

Malinowski, who is the representative for the seventh district, said the Route 206 project was long overdue, mentioning that he was always told growing up in the Princeton area as a teenager to always “avoid 206 when you can.”

“This is a huge step forward thanks to a governor who has made reversing New Jersey’s infrastructure deficit a top priority and thanks to our efforts to claw back those tax dollars that New Jerseyans send Washington every single year,” Malinowski said about the Route 206 project.

The Route 206 widening project’s contractor is a Bedminster-based construction company Konkus Construction, which is owned by Hillsborough native Keith Konkus.

Lipani recognized Konkus’ roots in Hillsborough during his speech, saying Konkus is a “shining star of success from the town” and welcomed the contractor back to the community. 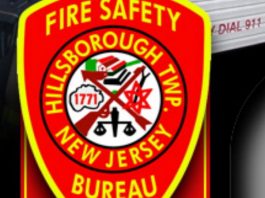