On April 21, committee members appointed Linda Jacus as the secretary for both municipal boards. Her appointment will become effective May 3.

Prior to joining Millstone, Jacus was the secretary for the Planning Board and the Zoning Board of Adjustment in Westfield, Union County. The salary for the position in Millstone Township is $47,000.

Jacus will succeed Pamela D’Andrea, who retired on April 16. D’Andrea had worked for Millstone since 2004.

In other business, the committee members appointed James Wishbow as temporary building inspector, effective April 26. The appointment was made on the recommendation of Business Administrator Kevin Abernethy and Construction Official Dennis Gibson, according to a resolution.

Wishbow will receive an hourly rate of $38 as Millstone Township’s temporary building inspector for a maximum of 16 hours per week.

And, committee members authorized the submission of a strategic plan as they seek a state grant to be used by the Millstone Municipal Alliance, which works to prevent prevent alcoholism and drug abuse in the community. The grant, for Fiscal Year 2022, will be in the amount of $8,060, according to a resolution. 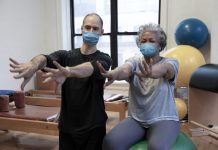