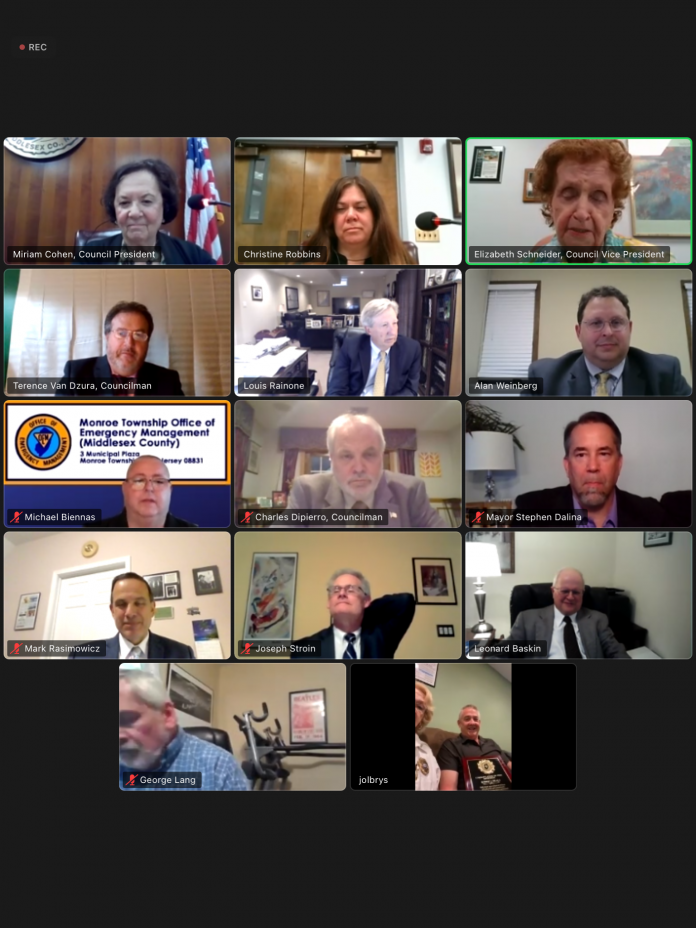 When the Monroe Township Council virtually convened May 3 for a combined agenda and regular meeting, its first order of business was honoring a dedicated township employee.

After 30 years of serving the community as an emergency medical technician and firefighter, Robert Drako has retired. It was Mayor Stephen Dalina’s “distinct honor” to mark the occasion before Emergency Medical Services Director Judy Olbrys jumped on the Zoom call to express how much Drako has meant to the Monroe Township family.

“It is going to take a while to get used to being without him here,” she said, adding that in addition to his 30 years with EMS, he spent 10 years with her on the volunteer squad, too. “He is going to be deeply missed. … We’re wishing him the very best and happiness and health and that whatever he decides to do, he keeps in touch with us.”

Before council members and township staff took turns personally thanking Drako for the profound effect he’s had on his community, the honoree himself spoke warmly about his decades with the township’s EMS team—and assured his neighbors that he’s “not going far.”

“I greatly appreciate my time with Monroe,” Drako said. “Everyone will be missed. It’s a long portion of my life. I still am going to do emergency services. I’ll be around.”

The meeting then turned to a lengthy agenda including second-reading ordinances, introduced ordinances and resolutions for consideration.

The second-reading ordinances included items like authorizing a government energy aggregation program for electricity, authorizing $2,825,000 in bonds for water and sewer improvements at the Spotswood Englishtown Road–Matchaponix Avenue location, and amending the township’s code regarding recycling yard regulations.

Meanwhile, the three ordinances introduced at the evening meeting focused on creating an Economic Development Advisory Board, amending the township code with a minor change to the stormwater management section, and both exceeding the municipal budget appropriation limits and establishing a cap bank.

With nearly 20 resolutions comprising the consent agenda, the council did take some time to discuss and separate a handful of those items, while public comment provided additional feedback.

Resolution R-5-2021-113 pertained to Monroe Township’s health advisory board, which elicited some questions and comments from residents about the application, vetting and selection process. Several also expressed their fears that the board’s appointment will be decided more by politics than merit.

Alan Weinberg, township business administrator, clarified R-5-2021-126, the authorization of emergency 2021 temporary budget appropriations. He explained that, even though “the word ‘emergency’ does sound scary,” it is a standard procedure: At the beginning of the year, the township establishes a temporary budget through the end of May at 26.25% of the previous year’s budget. The council is allowed to “extend that for an additional month or two, depending on the budget circumstances.” In this case, he said, the temporary budget has been extended for two months.

During the regular meeting portion of the evening, the council read two proclamations, one recognizing May as Military Appreciation Month and one marking May 14 as Apraxia Awareness Day, before opening up the public hearing for second-read ordinances and formally introducing the meeting’s first-read items.

Weinberg then offered some good news regarding COVID-19 vaccination and infections rates, with the former on the rise and the latter on the decline—a trend that, if it holds, means life could begin returning to normal sooner rather than later.

“That really allows us to do more. … We’ll certainly be moving in that direction, and it is very welcome,” he said, adding some thanks to residents for doing their part to hasten the end of the pandemic’s disruption of everyday life.

Weinberg also noted that last year’s hiring freeze, furloughs and reduced programs are things of the past.

Councilman Terence Van Dzura added that Monroe has “the number one vaccination rate in the entire county, which a lot of hard work was put into that to get us there.”

He and his fellow council members agreed that township residents and organizations have been proactive in not only navigating the pandemic but also demonstrating community-minded altruism throughout the past year in the likes of local projects, initiatives and outreach efforts to those in need.

With the introduction of the 2021 municipal budget, estimated to be $65.3 million, the township business administrator said Monroe Township residents can expect to see a “modestly lowered” tax rate from 0.493 to 0.490.

Debt services is also down about $350,000, and Weinberg said over the past five years, the township has “been able to reduce our net debt by almost 20%, which is exciting.”

Dalina remarked on the “soft reopenings” throughout Monroe as COVID’s stranglehold on the township abates, especially the library and recreation center, as well as the return of new traditions, such as another season of outdoor movies.

However, he noted the inherently global nature of a pandemic and observed that the dramatic increase in India’s confirmed cases is troubling, and he has been speaking with community leaders about a fundraiser, especially since numerous community members have family in the Indian subcontinent they’re worried about.

As the newly introduced budget is Dalina’s first to oversee as mayor, he said it’s “important to recognize the challenges that the pandemic has brought all of us. We’ve all had to adjust our household budgets to some extent” in an unprecedented year.

During open public comment, residents expressed some frustration with state legislators, echoed council members in praising those community members—especially the youth—who have been dedicating themselves to caring for the community recently and implored council to consider working with the board of education to handle issues like funding and students who currently do not have a school they can attend in-person because of buildings’ capacity issues.