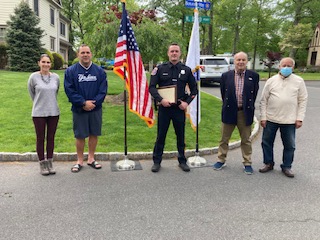 North Brunswick continued its Veteran Street Sign Program with its first honorees of 2021.

North Brunswick police officer and U.S. Army veteran William Trammell Jr. was honored with a street sign for Trammell Way at the intersection of Holly Road and Wood Avenue.

A North Brunswick native, Trammell grew up on Holly Road and attended Judd Elementary School and Linwood Middle School, and graduated from North Brunswick Township High School in 2001, according to information included in a proclamation read during the street sign unveiling on May 10.

He served in the United States Army as a military police officer and his overseas assignments include Camp Taji Iraq, Camp Cropper Iraq and Camp Victory Iraq, where he conducted detainee operations, according to the proclamation.

He received the National Defense Service Medal, the Global War on Terrorism Medal, the Iraq Campaign Medal with Campaign Start and the Army Service Ribbon, according to the proclamation.

He was Honorably Discharged from his military service in December 2010.

Trammell was sworn in to the North Brunswick Township Police Department in February 2012.

Bonura served during Operation Enduring Freedom under the United States Marine Corp. He enlisted in the Marines in April 2009 and attended basic training at Parris Island, South Carolina.

He was chosen and served as the platoon leader for the duration of his training.

He graduated in July 2009 as the honor graduate and was meritoriously promoted to the rank of private first class, according to his proclamation read on May 10.

After graduating from the School of Infantry, Bonura was assigned to the 3rd Battalion 6th Marines, Weapons Company, Combined Anti Armor Platoon.

He was deployed from January to August 2010 to Marjah, Afghanistan, as part of the initial increase of 35,000 troops by President Barack Obama. His unit cleared and secured the City of Marjah to assist the ongoing troop buildup, according to the proclamation.

In March 2011, he was meritoriously promoted to the rank of corporal after attending Advanced Infantry School.

He redeployed from June to December 2011 as a section leader who was responsible for overseeing a section of 20 Marines, five heavily armored vehicles and $17 million in serialized gear. He led the section on 200-plus mounted patrols, clearing more than 250 choke points, allowing a safe passage for the section and nearby units from enemy improvised explosive devices, according to the proclamation.

He was awarded the Navy and Marine Corp Achievement Medal for superior performance as well as credit with assisting in the capture and detainment of 46 suspected Taliban fighters, according to the statement.

He returned home after his second deployment and was briefly reassigned to Tactical Training Exercise Group in Twentynine Palms, California. He conducted Pre-deployment Training Program (PTP) Assessments of Infantry Units during full spectrum operations to prepare units for deployment, according to the statement. He applied his combat experience to train hundreds of Marines in infantry tactics.

His father, William Bonura, is a retired lieutenant with the North Brunswick Police Department.

The Township of North Brunswick’s Veteran Street Sign Program allows township residents who were wartime veterans to be recognized by adding their name on a secondary street sign to an existing municipal road.

Eligible military candidates for this honor include honorably discharged veterans having served in military departments as defined under Department of Defense which include Departments of the Army, Navy, Air Force, Marine Corps and the Coast Guard.