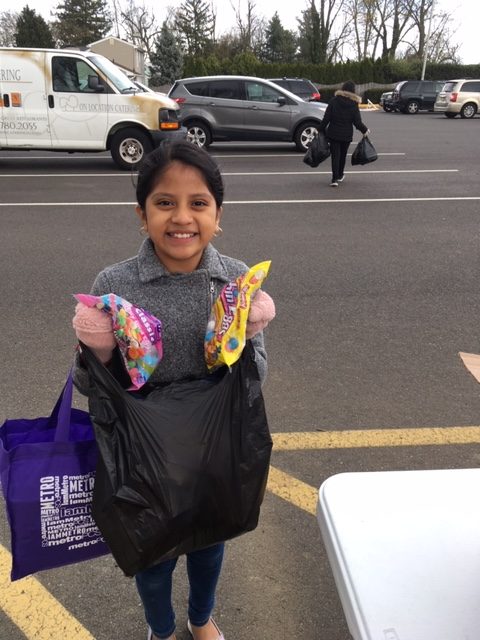 In the Freehold Borough School District, close to 80% of the students are eligible for free/reduced lunch. While schools were closed in March 2020, Superintendent Rocco Tomaciz provided meals to roughly 1,650 students in grades pre-kindergarten to grade eight through a pick-up program at the Park Avenue complex.

However, there were no funds budgeted for meals during spring break last year, so Freehold Borough Administrator Steve Gallo and Councilwoman Annette Jordan reached out to the Freehold Borough Educational Foundation to see if the foundation could make a financial contribution to help fill the gap.

“A quick poll of my board garnered a majority consensus to assist with a large financial commitment by redirecting funds we had allocated for now-cancelled cultural arts programming for our schools and to organize a food drive and help raise additional funds,” said Jean Holtz, chairman of the education foundation, current chair of Downtown Freehold and a member of the Food Safety Network representing the education foundation. “Subsequently, the foundation partnered with Downtown Freehold, Neighborhood Connections to Health and Freehold Borough to raise funds to pay local restaurants to provide 3,200 meals a day during spring break (April 10-17, 2020).”

“In a little community like Freehold, that means a lot,” Holtz said.

“The volunteer coordination of this was a really important stepping stone,” said Linda Brown, executive director of Neighborhood Connections to Health.

“It is certainly something we are really proud of,” Brown said.

“It was really important for us to ensure we were thinking about the community … and hopefully maintain as many jobs as possible,” Brown said.

In addition, Pomptonian Food Service, the school district’s cafeteria contractor, donated 1,000 cookies for distribution, and CVS in Manalapan donated its inventory of Easter candy to give out to the families, Holtz said.

Meet the Need learned of the plans and distributed an additional 800 packaged lunches.

There were donations from Rotarians and Optimists, teachers and administrators, Democrats and Republicans, the clergy, local grocery stores, elected officials, school board members and regular folks from throughout the community, Holtz said.

The educational foundation was also able to donate Amazon gift cards to 165 teachers in the district in order to get something for their classroom or their Zoom room at holiday time. Teachers bought bilingual books for ESL students, webcams or cameras, or a stylus pen for modeling math problems, for example.

“From our perspective, and my interactions with the superintendent and some administrators, our students are coping well and teachers really stepped up,” Holtz said.

Moving forward, the Freehold Borough Educational Foundation is planning to rent a tent for the eighth graders for the morning after graduation so they may have breakfast together, which is a tradition. Holtz said money usually earmarked for cultural programming in the schools will be reallocated to the breakfast.

Also in June, the educational foundation will hold its annual Fourth Grade Bicycle Education program for all fourth graders and also fifth graders who missed out on the activity last year.

“About 25% of our fourth graders don’t know how to ride a bike, but they can after this 4-hour program, Holtz said. “Everyone receives a helmet, this year courtesy of Neighborhood Connections to Health.”

The foundation also provided $12,000 in mini-grants to teachers in January for several science projects and speciality library books regarding equity and diversity.

Another grant was for “We The People,” a project proposed by the three eighth grade history teachers. The funds are geared toward increasing the media center resources in the U.S. History of Government and Civics, teaching eighth grade students research skills, and encouraging the students to create video presentations of their research.

Also, Freehold Intermediate School was offered $5,000 in funding to underwrite their Participatory Budgeting project. The students voted to purchase sustainable outdoor furniture for their courtyard.

“The collaboration that has come together and grown so that individual needs are being met … is really about taking care of the individual,” Holtz said. “It can be small or large; we’re taking care of everybody.

“It’s been really impressive how restaurants, businesses, volunteers, community organizations and churches have come together to support each other through a crisis to keep everyone afloat. It’s very impressive for a small town with limited resources,” Holtz said.

In addition, this partnership has moved forward from providing meals to providing access to COVID vaccinations.

Holtz said many residents of the borough don’t have access to a laptop, so volunteers would make vaccination appointments on Tuesdays and Thursdays.

She estimates more than 3,000 residents have gotten their vaccines through a VNA clinic at St. Rose of Lima Community Center since March.

The YMCA of Greater Monmouth County on East Freehold Road also provided meals to the community through a partnership with Open Door.

The community food bank is usually open five days per week, but was limited to two days per week because of the pandemic.

So, the Y partnered with Fulfill, the food bank for Monmouth and Ocean counties, to offer a crisis box three days a week.

Each box would contain two to four meals, and about 17,000 meals were distributed, according to Jo Ann Rountree, association director of community outreach for the Y.

Through the Food Safety Network, the Y also benefited from restaurant meals which were included with the crisis boxes.

In addition, about 75 boxes of produce were handed out per week as well.

In addition, through grant funding from Fulfill, dairy and produce were made available to those in need.

“It was amazing. It’s been so rewarding,” Rountree said. “People lost jobs, had health issues, lost family members – this was their primary source of food. … We were able to make sure everyone has food. Food is a need. The Y was in a position to jump right in to supporting that need.”

The YMCA also hosted Thanksgiving dinner, where Fulfill donated 400 pre-cooked frozen meals. Dessert was provided through funding from the Y.

Rountree said the crisis box distribution will continue until there is no longer a need, and she hopes that community dinners will continue.

“The support we get from the community is amazing,” she said. “We pulled together to make sure access to food is 5-7 days a week. We are thrilled the Y is part of that.”

“Our response during the pandemic was immediately to raise funds for hot meals for the school district when school went into spring break last April,” said the Rev. Jonathan Elsensohn, convener (president) of the Greater Freehold Clergy Association and pastor of First Baptist Church of Freehold. “Spring break really coalesced a lot of the efforts and brought us together.”

He said the role of the 19 members was to generate volunteers to staff food distribution events, collect material donations, and fundraise.

The Cousins Maine Lobster truck was periodically parked outside of the Co-Cathedral of St. Robert Bellarmine in Freehold Township, with a portion of proceeds donated through St. Robert’s to the Food Safety Network.

St. Robert’s also manages the Blessing Bag Brigade, and the SRB Help group was added to the Food Safety Network.

A Little Food Pantry at the First Baptist Church in the borough, conducted like a Little Free Library, was a stop-gap measure on days Open Door couldn’t provide food, Elsensohn said.

The clergy association is also collecting diapers and feminine products, which are in great demand, as well as maseca corn flour and cooking oil.

Elsensohn explained that each faith explicitly calls on its followers to care for their neighbors.

“The care is for society that has either been left behind or overlooked,” he said. “All our traditions have these teachings that ask us to care for our neighbors.”

He said the basic need of ensuring a child is fed has shown better performance in school, which leads to better career success.

“The clergy association has devoted its time and its efforts to build an interfaith network … when all communities can function across all spectrums … and have the greatest effect on our communities in the most pressing way,” Elensohn said.

Homes & Living – The kitchen is where memories are made