The public hearing that took place at the June 13 Edison Township Council meeting held far more significance for the community than simply putting the town on a path toward the creation of a new neighborhood park.

The actions taken by the town council that night represented a celebration of a successful grassroots advocacy campaign that called for a land acquisition initiative that they say would benefit the health and well-being of the entire Edison community.

Council members at the meeting unanimously approved the application for two grants – a $500,000 urban parks development grant and a $7 million Green Acres grant – that if obtained would allow the town to purchase 10 acres of property in the Silver Lakes Avenue neighborhood that would be an extension of the Middlesex Greenway.

In 2020, Gov. Phil Murphy and the New Jersey Legislature dedicated $2.5 million in the state budget to promote urban parks. The Department of Environmental Protection established the Urban Parks initiative to award this funding to eligible applicants. Another source of New Jersey open space funding is The Green Acres, Farmland, Blue Acres, and Historic Preservation Bond Act of 2007 that authorized $12 million for acquisition of lands in the floodways of the Delaware River, Passaic River or Raritan River, and their respective tributaries, for recreation and conservation purposes.  An additional $24 million was approved by the voters in the Green Acres, Water Supply and Floodplain Protection, and Farmland and Historic Preservation Bond Act of 2009.

Currently, the Silver Lakes land being fought for is zoned industrial and was on its way to becoming a 176,630-square-foot warehouse. In the summer of 2020, the warehouse application submitted to the Planning Board by 41 Glendale LLC was done properly and with no need for variances. But then the story took a transformational detour, thanks to Ron Loeffler, a Silver Lakes neighborhood resident. The residents along Silver Lake Avenue and the intersecting streets have been protesting against the proposal of the warehouse since they learned about it in August through Loeffler.

“It was the middle of the pandemic – the summer of 2020 and no one was really paying attention to anything other than surviving and isolating,” said Laura Uhlig, a Silver Lakes neighborhood activist. “In early August, Ron discovered the warehouse proposal after seeing a presentation on upcoming Planning Board applications. He called around asking neighbors if they had heard about it, and no one had. And then he proceeded to wake us all up, and we have been fighting nonstop since then,” Uhlig said.

Through social media, print media, countless signs, networking and advocating at Zoom and in-person meetings, they succeeded in making noise and getting the attention of Edison leadership who embraced the mission of the Silver Lakes neighborhood, a historic section of town and a residential enclave of about 3,000 people.

“We need to preserve every speck of open space in this densely developed community,” said one of the neighbors at the council meeting, as she expressed a sentiment echoed by several other speakers – including the town council members.

A turning point occurred when the property owner indicated that he would be open to selling the land to the town, if it was going to be used for open space. Initially, the neighbors were working on an environmental strategy to prevent construction on the site. But that effort was proceeding slowly with no guarantees of success.

This new development has given residents hope.

“At this point it’s up to the township and Middlesex County if they can afford it and if they want to go ahead and purchase from the developer,” said Uhlig. “We are not there yet, but we are getting there. I am hopeful. We won’t stop with our fight, until that land is purchased for open space preservation.” 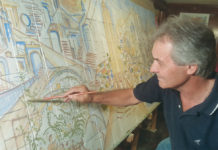