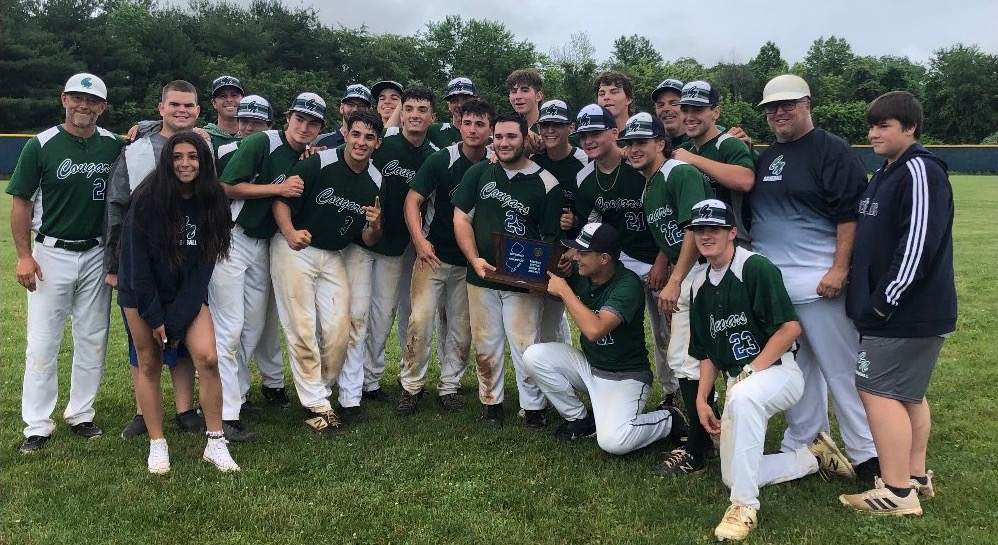 Juniors Colin Kratzer, Anthony Gubitosi and Christian Rice were strong pitchers Yorke and his assistant coaches had seen in action as freshmen in 2019. The coaches believed the young men could be “very good” when they reached the varsity level.

Following the cancellation of the 2020 season during the coronavirus pandemic, those players were ready to shine in 2021.

“We started the year knowing we had the arms,” Yorke said. “We just didn’t know how the kids would grow to hit varsity pitching.”

Talent aside, Yorke understood the biggest challenge his players would face would be buying into playing what he called “team baseball.” The coach made that clear to his players following a 10-2 loss to Marlboro on May 10.

The Cougars had lost two consecutive games and Yorke spelled out that the players needed to play sound fundamentals of team baseball if they wanted to turn things around and have a good season.

The Cougars heard those comments loud and clear and went on to win 16 of their next 18 games.

The victory came on the Cougars’ home field.

“It felt amazing,” Yorke said of winning a sectional title. “It was the culmination of a lot of hard work by the team and the coaching staff.”

With the score tied 2-2 in the bottom of the seventh inning in the championship game, Colts Neck loaded the bases with no out. Junior Dave Cohen stepped to the plate and smashed the ball over the fence in right field.

As Cohen rounded second base, he was mobbed by his jubilant teammates. Because Cohen did not complete his trip around the bases, his apparent grand slam went into the scorebook as a “walk-off grand single” that made the final score 3-2.

Yorke said that in all his years of playing and coaching baseball, he had never been a part of a game that ended in that manner.

He compared the Cougars’ victory over Northern Burlington to the Oct. 17, 1999 playoff game between the New York Mets and the Atlanta Braves when, in the bottom of the 15th inning, Robin Ventura hit an apparent grand slam to win the game for the Mets, but was credited with a single because he, too, did not make it all the way around the bases before being mobbed by his teammates. The Mets were credited with one run and a 4-3 victory.

In the final analysis, Yorke was thrilled with his squad’s accomplishments in 2021. He said putting together a 22-8 record and winning a state sectional crown has set a “new bar” for the Cougars going into the 2022 campaign.

With a stable of arms in Kratzer, Gubitosi, Rice and Tyler Spencer expected to return next spring, Yorke believes the Cougars will have the pitching and hitting that will allow them to compete with the best teams in the Shore Conference.

“We want to reach that bar and get past it. Our arms were outstanding all year. No matter where we are to begin the season, it’s going to come down to our players needing to buy in and playing team baseball,” Yorke said.