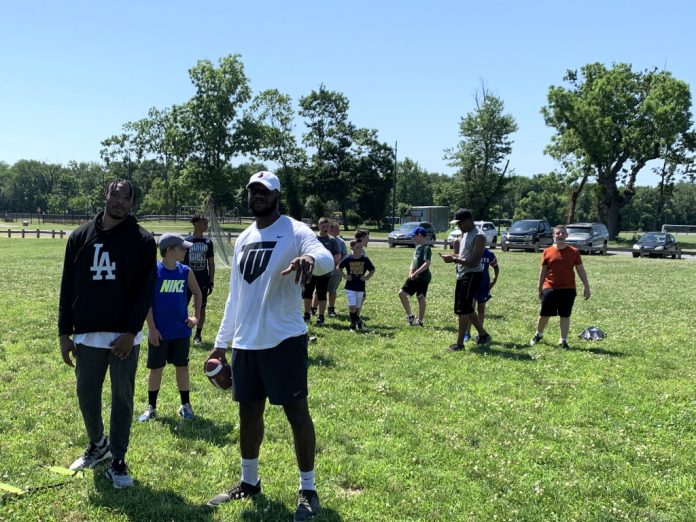 Howell PAL President Chris Hill, a retired sergeant with the Howell Police Department, said the PAL has organized a youth football camp for about 20 years.

“I do it every year; we try to give the kids an opportunity, we have local players and guys who made it to the NFL and they come back,” Hill said.

The youth football camp is open to boys between the ages of 7 and 16.

One instructor at this year’s camp was wide receiver Saeed Blacknall, who is currently a free agent.

Blacknall played football at Manalapan High School and at Penn State University, where he earned the nickname “Megatron Jr.” after wide receiver Calvin Johnson, who will soon be inducted into the Pro Football Hall of Fame.

Asked why he was participating in the PAL camp, Blacknall said he was “doing something for the youth, all ages, these are young guys. Because when I started playing football it was around sixth grade, so I didn’t have this type of movement or just direction or just this kind of camp in general.

“We had our neighborhood, we would go outside in the backyard and play football. I was thankful to have a brother, a little brother I beat up on, but it is good to get these guys out here just to know what competition is and see what it looks like, and to feel different types of pressure,” he said.

Blacknall was running wide receiver footwork drills and helping the campers with their footwork, quickness and weight transition.

“The sun is also an element, it’s hot, it’s summertime and to let them go out here and do what they want to do; boys like to have fun and run around on grass,” Blacknall said.

Wright went undrafted in 2013. He eventually signed with New England and won a Super Bowl with the Patriots in 2014. He came back to share his experiences with local youngsters.

“I just told them the importance of hard work, being disciplined, having integrity, listening to your coaches, being coachable, and then going out there and applying it. Never giving up, the core factors of having a team.

“There is no ‘I’ in team, but you’ve got to bring your piece to the puzzle every single day. So those are the main coaching points I taught them, that I translated and used throughout my career,” Wright said.

“It feels good being here, man, I remember being in their shoes about 15 to 20 years ago, so being able to give back and instill that importance in them feels really good,” he said.

“I did this camp (in 2019) and I know it was a good turnout with the kids and it is good to come back and help the kids. When I was growing up there were no NFL players that I knew in this area, so it’s good for the little kids just to see it, to see it is possible. If they have dreams of doing this, it is possible. We are a living testimony of that,” Hyman said.

While running one-on-one receiving drills with the campers, Hyman joked, “All these guys playing receiver, let them know who taught them, too!”

Other counselors at the Howell PAL football camp included Bob Mussari, who coached at Howell High School; Darryl Reid, a Freehold High School graduate who won a Super Bowl as a member of the Indianapolis Colts; Keith Kirkwood, a wide receiver with the Carolina Panthers; recent Colts Neck High School graduate Matt Scully, who has committed to play at Franklin and Marshall College; Delano Marcellus, who will be a freshman at West Liberty University in West Virginia; and U.S. Army recruiter James Williams.