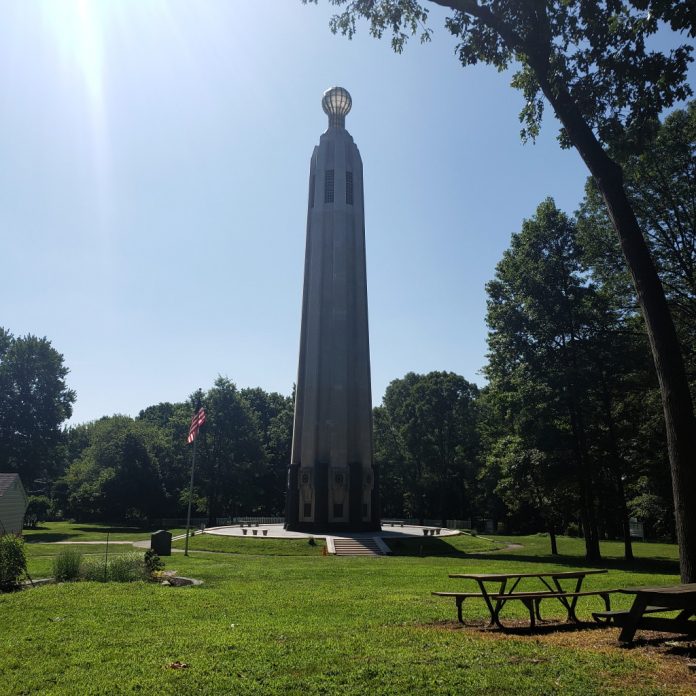 “We believe that a glimpse into Thomas Edison’s life, inventions & legacy is electrifying.” And for more than a decade, Carlucci has spent her professional life making sure that the spark of Thomas Edison’s life keeps inspiring and enlightening people in the town of Edison, in New Jersey, in the United States, and in nations throughout the world.

“Sharing the history of Menlo Park for the past 13 years, explaining what inspired Thomas Edison, and ultimately what was accomplished here, I find extraordinary. I enjoy watching the wonderment on the faces of our visitors, local and from all over the world, when they hear the amazing history of Thomas Edison at Menlo Park in Edison, New Jersey. In 2019 we had visitors from 62 different countries and every state in the United States. … And just this past Saturday, July 2, we had 109 visitors,” she said.

Independence Day weekend marked the post-pandemic, full reopening for the famous museum and park that celebrate the life and accomplishments of Thomas A. Edison. The Thomas Edison Center at Menlo Park closed its doors on March 13, 2020. During the shutdown the museum installed an air-purification system, added an online ticketing feature, an online gift shop, and an inventory system.

The center reopened mid-October 2020 on Saturdays only, following all CDC COVID protocols.

“We were pleased by the number of guests that came for a visit, and each week the numbers seemed to increase,” Carlucci said.

Thomas Alva Edison, who died in 1931, was an American inventor and businessman, described as America’s greatest inventor. He developed many devices in fields such as electric power generation, mass communication, sound recording and motion pictures. These inventions include the phonograph, the motion picture camera, and early versions of the electric light bulb, and have had a widespread impact on the modern industrialized society.

Although Edison set up research and manufacturing facilities in several different locations including Menlo Park in 1876, Menlo Park is the only place where a tradition of commemoration has become established.

For over 90 years, Edison’s colleagues and admirers from across America and around the world have singled out Menlo Park as the place to build monuments and pay respects to his memory and his work.

Two memorial tablets and two towers have been erected since 1925, the second of which is the iconic Thomas Alva Edison Memorial Tower, built in 1937.

Topped by an enormous light bulb, the Art Deco Tower has quite literally been a beacon for the community for decades. The tower was rededicated in 2015 after a major restoration project and during the ceremony another tribute was unveiled, a six-foot sculpture of a modern day light bulb.

For many years on the Sunday afternoon before Edison’s birthday, on Feb. 11, members of Menlo Park’s volunteer fire department had laid a wreath at its base.

She has designed annual Christmas Tree Lighting and Trail of Tower Fall programs, working with the township police, fire and recreation departments to create gala holiday events for members of the greater Edison Community to enjoy at no cost.

Carlucci is one of only three paid staff people – the director and two part time curators.

It is passion for the significance of the subject matter that energizes the team of volunteers – six docents and 10 high schoolers – who keep the museum operations running effectively, she said.

The story of how the town of Edison assumed the name of Edison is particularly interesting to Carlucci, who cited the following excerpt taken from Westfield Architects & Preservation Consultants’ 2007 Preservation Master Plan, Edison Memorial Tower, Museum & Site:

Raritan Township around 1900 still remained largely a rural community of incoherent neighborhoods that did not share any common identity as part of Raritan Township. By this time, one of the neighborhoods, Menlo Park, had become world-renowned as the birthplace of recorded sound and the perfection of the incandescent light bulb, among several other inventions, thanks to Thomas Alva Edison who had set up his laboratory and operations in Menlo Park in 1876. In the twentieth century, Raritan Township was home to a large group of Edison’s ex-associates and well-wishers who formed The Edison Pioneers. One of them was Joanna Wira, who organized the Women for Edison group and who was also an active member of several other local organizations. In 1954, she started a movement to change the name of the township to Edison Township. During the same time, another group of residents began campaigning to change the name to Nixon in honor of Lewis Nixon, who had founded Nixon Nitration Works in the township and the Crescent Shipyard in Elizabeth that built ships for the U.S. Navy. The vote on Nov. 2, 1954, was close but the name change to Edison Township was selected by a small majority. Over the next few years, the existing train station was renamed Edison, the Edison post office was established, and all of the fire companies of the various neighborhoods were consolidated into the Edison Fire Company.

Learn more about the life of Thomas Edison and the history of New Jersey’s innovation DNA by visiting the Thomas Edison Center at Menlo Park. As of July 2 tours are available Thursday, Friday or Saturday from 10 a.m. to 4 p.m.  Groups over 15 can book a tour in advance for Tuesdays or Wednesdays, when available; call the museum for larger tours.