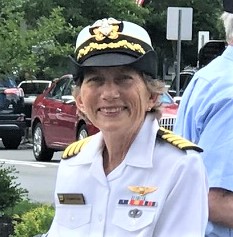 Shelley Pennington, 65 passed away on June 25, 2021 after a valiant battle with ovarian cancer. In her final days Shelley was surrounded by friends, family members, and her sweet cat Chloe, and was specially cared for and attended by her devoted sister Beth.

Shelley was born in Hawaii. She was the second of five children of Naval officer Jack Pennington and his wife Betty Jo. Shelley’s family moved to Pennington when she was 9 years old.

At Hopewell Valley Central High School Shelley demonstrated her exceptional athleticism and a fierce, take-no-prisoners competitive spirit in basketball, as a goalie in field hockey and track. Despite her petite stature, she was voted MVP and captain of her high school (and later college) basketball teams. She would later join a subset of only 6 other elite young athletes by being voted into the HoVal Athletic Hall of Fame.

Shelley followed her father in serving in the US Navy, beginning with the Reserve Officers’ Training Corp while a student at her beloved Rice University. After graduating with a degree in computer science, Shelley completed Naval flight training as part of the second class that allowed women to train as pilots. She was one of 16 women in a class of over 1,000.

TWA recruited Shelley in 1985. Shelley resigned from the active military to transfer to the US Navy Reserves in which she served with honor for three decades. Shelley was courted by many airlines and family lore maintains that Shelley opted for TWA because that airline offered the most generous travel benefits (occasionally even first class!) for her ever-frugal parents, who then took great joy in travelling the world first class, compliments of TWA.

After 10 years of flying with TWA, Shelley was recruited by UPS where she was promoted several times, ending her career as the Chief of Pilot Safety for the 757 and 767 aircrafts. In that position she had many responsibilities, including being alerted at random days and times of a flight mishap. She would then fly to various UPS sites around the world to investigate and resolve issues. Her keen intellect and logical, dispassionate analysis of mechanical, procedural, human and structural contributors to an issue allowed her to pinpoint fixes to increase safety and efficiency.

Shelley satisfied her drive to compete athletically by competing with and leading teams of military reservists from many NATO nations in an annual 3 day pentathlon of orienteering and specialist military skills. Each year Shelley would coach and encourage her team for months while also engaging in grueling training herself. She earned the respect of her teammates and competitors, and made many lifelong friends in her two decades of involvement.

Like her father, Shelley was an avid amateur distance runner, qualifying for and competing in the Boston Marathon for many years, along with racing in numerous other races. Exceptional in her ability to “gut it out” and prevail in long, challenging feats of physical prowess and endurance, Shelley found her “favorite” event to be four days of road racing competition at Florida’s Disneyworld: a 5K followed by a 10K race on day 2, then a half-marathon on the 3rd day and culminating with a full marathon on day 4. She tremendously enjoyed the companionship of running friends and buddies at this event. Summers also found Shelley biking across Iowa with thousands of others and her with her dearest pal and fellow competitor Trish Gibbs.

Shelley retired from UPS in 2012 to return to care for her mother and her father in their final years, moving between their residence in San Antonio TX and their summer home in Pennington NJ. As their companion then their caretaker, Shelley tirelessly managed their medical care, she planned and accompanied them to a wide range of cultural offerings, and she performed endless household tasks, initially as handyman, computer technician, yardman, cook and accountant.

After both of her parents had passed, Shelley trained to become an emergency medical technician and volunteered at the Pennington Rescue Squad. Shelley relished the initial and ongoing training, the detailed procedures to guide the work of this volunteer corps with community members and local hospitals, driving and maintaining the ambulances and, overall, the comradery and shared experiences with many new best friends. The crackling and squawking of the first responder radio became the constant audial backdrop in her Pennington home.

In addition to The Squad, Shelley stayed active in orienteering, most recently assisting with an event in Olmos Park in San Antonio, Texas. While in Pennington, Shelley was an active member in her parents’ church, the Pennington United Methodist Church and also donated time and talent to the Girls and Boys Bike Exchange in Ewing. This nonprofit repairs donated bicycles and sells them at modest prices to raise funds for the Boys and Girls Clubs of Mercer County while also promoting healthful exercise, biking for transportation, and active play for children and youth.

Shelley will be dearly missed by her four siblings, numerous nieces and nephews, and friends throughout the world. Memorial donations may be directed to the Pennington Rescue Squad, Sourland Conservancy or the Pennington United Methodist Church. Shelley will be laid to rest, joining her parents, at Pennington Cemetery, on Saturday October 16, with military honors.