HOWELL – The members of the Howell Zoning Board of Adjustment may make a decision regarding a proposed warehouse on Ramtown-Greenville Road when they meet on Aug. 9.

The application of 366 Ramtown-Greenville Road, LLC, and Steven Stefansky, as the applicant and owner, was most recently heard on June 28.

A use variance is required because Stefansky is proposing to expand a non-conforming use at the property. He is also proposing to use an existing 17,485-square-foot building for warehouse space and office space.

He said traffic counts were conducted in late October 2019 and early November 2019, prior to the start of the coronavirus pandemic.

Ramtown-Greenville Road “carries a little bit less than 3,000 vehicles per day in two directions near the subject property’s frontage and that squarely puts it in the collector road category. Technically, the capacity of the road to handle traffic is significantly higher than the 3,000 or so vehicles per day. The capacity is probably four or five times that amount; not that (the proposed use) is going to generate that much traffic, but (the road) is operating well within its rated capacity,” Rea said.

During public comment, resident David Esquenazi asked numerous questions, including, “How can we ensure that deliveries come and go toward the south, toward County Line Road, and not north toward Newtons Corner Road?”

Esquenazi asked if there was a restriction that could be put in place to ensure trucks go south toward a traffic light and not north toward a community with children riding bicycles in the area.

Pape said Stefansky indicated that 90% to 95% of his trucks travel south.

“If this board chose to fashion restrictions on turning movements, we would certainly be willing to work with them on that. We find it to be a reasonable requirement,” Pape said.

Esquenazi said he thought certain restrictions would alleviate stress that residents of the area have in connection with the application.

“Everyone here is pretty nervous about all these trucks going up and down Ramtown-Greenville Road,” he said. “That is a major concern for a lot of people in the neighborhood here.”

“I implore you to vote this (application) down, to have them build this (project) in a more appropriate location where bigger, more accessible roads are more (suited) for that type of business. You don’t see too many distribution centers in a small community all surrounded by houses,” he said.

The board’s chairman, Wendell Nanson, said the type of use the applicant is proposing is not going away. He said the current operation would stay in the environmentally sensitive area and continue operating as it does at present.

“I want the public to understand that. You have to kind of look at the overall picture here,” Nanson said.

“Here is the problem, Mr. Chairman. It is going to change immensely, it might be the same (use), but there is going to be a lot more of it and quite frankly, the roads you want to do it on cannot handle this,” said Michael Bernstein, who has lived in the area for 17 years.

Bernstein said the amount of truck traffic in the area has increased significantly during the past two years and he asked the board members to deny the application.

Joan Osborne, who chairs the Howell Environmental Commission, said it was her understanding that with zoning restrictions, permitted uses and non-conforming uses, “You (board members) indulge the pre-existing grandfathered use, but you generally don’t try to allow (the use) to expand.

“I would ask for the benefit of the people who live there, it is very much an agricultural rural estate zone, there are not a ton of non-conforming uses in that area. There are schools, there are a lot of children going to the school, to play at, to go to school.

“There is a lot of pedestrian traffic in the area and having a warehouse type of facility in the area would just change the character. I would ask you to not approve this application,” Osborne said.

Other residents also spoke and expressed concern regarding traffic and the proposed project’s impact on the environment, especially in regard to flooding.

The 366 Ramtown-Greenville Road application was carried to the zoning board’s Aug. 9 meeting. Board members said there will be no further public comment or testimony from the applicant; just a summation from the applicant’s attorney and a decision by the board. 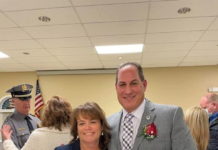