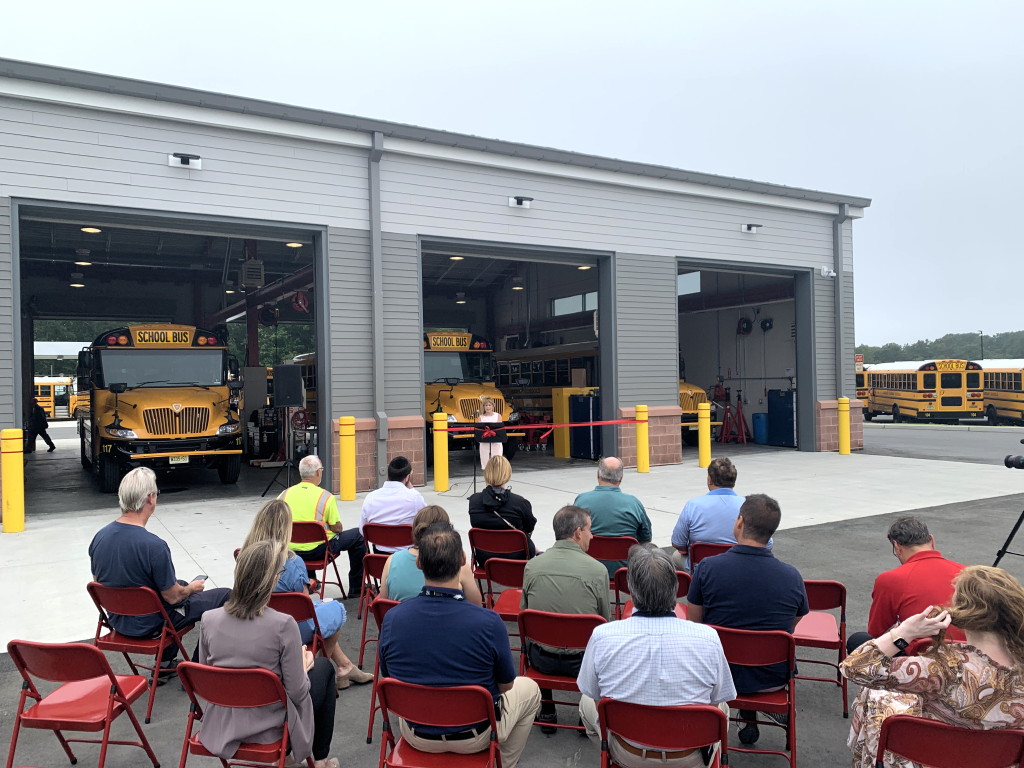 JACKSON – It took a while, but administrators in the Jackson School District have finally cut the ribbon on the district’s new satellite transportation facility at Jackson Liberty High School.

A ribbon cutting ceremony was held on July 13 to officially open the $5.6 million facility that has been in use since April 2020. The building remained in operation during the coronavirus pandemic that overtook New Jersey during 2020.

“On behalf of myself and Michelle Richardson, our business administrator who oversees the transportation and facilities departments, we are so pleased to be here today to formally recognize the ‘official’ opening of our new satellite transportation facility.

“As we all know, Jackson has changed tremendously over the past two decades and this facility is a big part of responding to that change. Our original transportation facility was built when our enrollment was only 4,000 students.

“As our district grew and our fleet grew, that location (on Don Connor Boulevard) did not have the ability to expand with those changes. In the past 10 years in particular, our Transportation Department has had to operate in ways that were not ideal,” Pormilli said.

“In a township that is more than 100 square miles in size, the Transportation Department operates more than 154 vehicles, all of which need to be maintained regularly and serviced periodically.

“Our vehicles travel 1.8 million miles each year transporting more than 9,000 students safely to and from school. We needed to adjust and adapt, and the result is a gorgeous building that stands for two things that this administration and this Board of Education believe in: progress and efficiency,” Pormilli said.

The superintendent said, “I would like to take a moment to thank our Board of Education; those members currently on the board and those who served in the past while this project was being conceived and realized.”

“And of course Dr. Stephen Genco, who was the superintendent during the entire time this facility was dreamed about, constructed and realized. It was under his leadership that this facility came to life and we are very happy he is here today to celebrate the fruits of his labor,” Pormilli said.

The superintendent thanked the Transportation Department employees and recognized their efforts on behalf of the school district.

“A project like this does not happen overnight and it does not happen without the constant attention of a project manager. For us that man was our facilities director Ed Ostroff, who might just be the happiest one of us all that this building is up and running.

“Ed is retiring from the district this week … so to be able to celebrate this building, which is the direct result of his expert coordination, attention to detail and perseverance, is wonderful.

“Thank you, Ed, for never letting up on anyone to make sure this facility was ready for us, and for so many other contributions to our district,” Pormilli said.