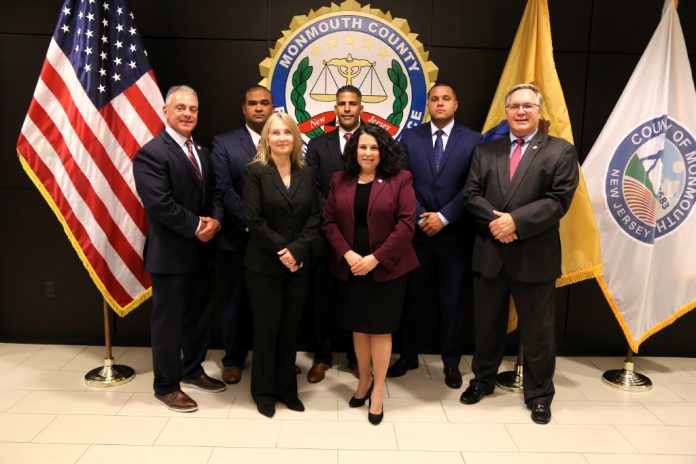 Acting Monmouth County Prosecutor Lori Linskey has promoted three members of
her investigative division to the ranks of captain, lieutenant and sergeant.

Linskey administered the oath of office to Donna Morgan as captain of detectives; Jose Cruz, Jr. as lieutenant; and Ramon L. Camacho Jr. as sergeant of detectives, according to a press release from the Monmouth County Prosecutor’s Office.

“Our office has an incredibly devoted and talented staff,” Linskey said. “I am committed to
ensuring we have a workplace that recognizes experience and hard work, and reflects the
communities we serve. All of the individuals being promoted today have demonstrated they are leaders, are committed to our mission, our cases and the safety and security of the
residents of Monmouth County.”

Over that time, Morgan has overseen numerous investigative units, including Professional Responsibility/Bias Crimes; Forensics and Technical Services; and the Special Victims Bureau, and excelled in all those assignments, according to the press release.

Cruz has 20 years of law enforcement experience. Cruz began his career with the Asbury Park Police Department and was sworn in as a detective with the prosecutor’s office in 2006.

Cruz, who is bilingual and fluent in Spanish, has served with distinction in the Major Crimes Unit; the Gang and Criminal Enterprise Unit; the Professional Responsibility/Bias Crimes Unit; and the Special Victims Bureau. He has held his previous position of sergeant of detectives since 2019, according to the press release.

Camacho joined the prosecutor’s office in 2011 after working as a patrol officer in the Asbury Park, Highlands, Little Silver and Long Branch police departments.

With the Long Branch Police Department, Camacho developed his investigative skills while
assigned to the department’s Street Crimes Unit.

He has spent the majority of his career at the prosecutor’s ffice in the Gang and Criminal Enterprise Unit before a recent transfer to the Major Crimes Unit. Described by Linskey as “a natural-born leader,” Camacho has 17 years of law enforcement experience, according to the press release.

In addition to the three promotions, Linskey also administered the Oath of Detective to
Julian Mayo as a new member of the office’s investigative team. Mayo was previously employed with the Colts Neck, Howell and Belmar police departments, according to the press release.

During a recent weekend, while still a member of the Colts Neck Police Department, Mayo saved a 38-year-old Colts Neck man by administering naloxone, a life-saving anti-overdose drug, according to the press release.

During the July 19 ceremony at the prosecutor’s office in Freehold Township, Linskey also highlighted and celebrated all of the other office promotions and new hires that were only able be conducted in a virtual capacity over the past 16 months due to the coronavirus pandemic, according to the press release.