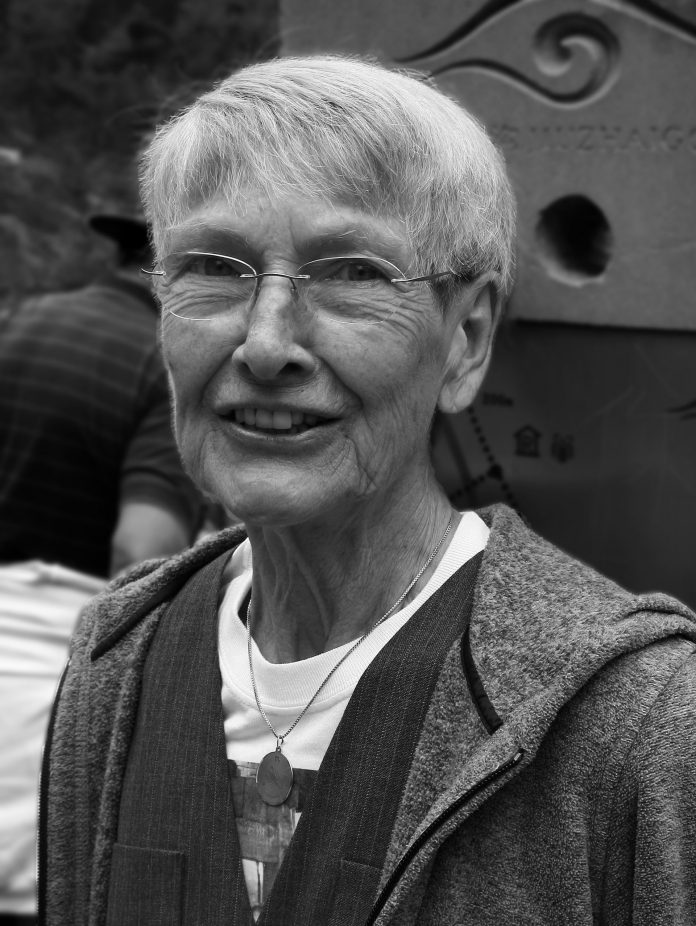 Inge Pielenz was born in Heilbronn, Germany, on her mother’s 25th birthday. Her childhood was shaped by World War II. Happily, her family lived in a rural town that suffered relatively little devastation. After the war, as the only daughter (with three brothers), Inge was expected to stay at home until she married, but she insisted on training as an interpreter. She studied French in Switzerland and then English in England.

Next Inge got a job in Heidelberg as an interpreter and secretary in the office of the chief chaplain for the U.S. Army in Germany. There she met Don Cadle, a private in the Army, but one with a B.A. from Yale and a Ph.D. from Oxford. They were passing acquaintances for more than a year before Don was asked by her boss to proofread her application to an American college, and discovered that the beautiful blonde German girl was also both smart and principled. With only 2 months left in his enlistment, he tried to court her, but she was skeptical, thinking all he wanted was a quick adventure before heading back to the U.S. Don, however, was very persuasive: they got engaged on their second date and were married on June 30, 1956.

Forty years of a very good marriage followed. Inge bravely left her family, culture and native language behind when travel between the U.S. and Europe meant either days on a ship or a sequence of propeller planes! Don soon joined the Civil Service, starting in the Bureau of the Budget; then he and Inge were joined by daughter Caron. Inge became an American citizen and settled into suburban life in Arlington, Virginia.

But in 1964 the three Cadles moved to Germany, due to the death of Inge’s beloved older brother Frank. Don was needed to help run the Pielenz family business, a sewing-thread manufacturing company. Inge had to readjust to being her parents’ daughter in her old hometown and help Don deal with the stress of learning a new language in his mid-30s and of working with his father-in-law. There was secret relief all around when, more than three years later, Inge, Don and Caron could return to the U.S. They settled in Washington, D.C., and Don resumed his work with the Civil Service.

Don left the government for private industry in 1970, and in 1971 the family moved north to Princeton, New Jersey. In 1978, Don opened his own investment business. This gave Inge and Don the flexibility to do a lot of what they loved best: encouraging, helping and broadening the horizons of (mostly) young people, with great generosity. Over the course of about 30 years, they took 66 teens and 20-somethings on major trips, including three to Egypt, four to China, one to the Soviet Union, two to India, and many more to Europe, Central America, South America, Asia, Australia, New Zealand, and many U.S. states. Inge was counselor, sounding board, den mother and cheerleader for two generations of young folk from the U.S., Germany, the U.K., Australia, Denmark, Switzerland, Mexico, Egypt, Turkey and Japan. She and Don opened their home and hearts to exchange students, relatives, friends, friends of friends, and to daughter Caron’s German husband, Ralf Remshardt, who was welcomed into the family in 1986 with celebrations first in Germany and then in Princeton. Inge and Don often changed lives with spontaneous acts of kindness, such as buying a car for the chauffeur who’d driven them during several trips to Egypt so he could open his own taxi business.

Inge managed to do all the above while also taking care of a large house, always full of guests, without any help until she was well into her 80s, and creating a huge, beautiful garden that was her greatest joy and, as she put it, her therapy. She always said that she would have liked to have been an architect, and her designs for a major addition to the Princeton house and for the landscape that surrounded it prove she would have made a good one.

Inge Cadle will be remembered by those whose lives she touched for her sense of adventure, her courage, her tenacity, her wit, and her warmth. When she lost Don in 1996, she faced the future without fear or self-pity. Asked by one Princeton neighbor how she managed not to cry, she replied, “I had 40 good years, I have no reason to complain.” She responded to the undeserved cruelties of age and memory loss with the same stubborn bravery. While we live, we will miss her.

Inge moved to Gainesville, Florida in 2018 and received 24-hour care starting in March 2019. She is survived by daughter Caron Cadle, son-in-law Ralf Remshardt, brother Albrecht Pielenz and his wife Christiane, sister-in-law Christa Pielenz, ex-sister-in-law Erika Pielenz, twelve nieces and nephews in the U.S. and Germany, their many descendants, and a large group of much-loved “relatives by choice,” as well as the best care team in the world: geriatric care manager Jocelyn Holt and caregivers Liza and Mary Clines, Melissa Giles and Iva Floyd.