In the courtyard of the Princeton Shopping Center, a newly created mural is greeting the Princeton community with a message of joy after a challenging year experienced because of the pandemic.

Walking through the main entrance of the Princeton Shopping Center and into the center courtyard, a colorful and positive message of “Bring on the Joy” is painted on a courtyard wall near the center’s fountain.

The artists were recognized and their mural work was unveiled at a mural dedication that took place at the center on July 29.

“There are plenty of reasons for joy. COVID-19 has started to recede and I know it is coming back, but hopefully people kind of get that there is more joy if we all get vaccinated,” Mayor Mark Freda said. “I think there is joy in just being out in the community, there is joy in just doing stuff together and let us appreciate all the good things we do have in our community.”

This mural is the first of three murals that will be created at the center through Spring of 2022 and a collaboration between the Arts Council and Princeton Shopping Center.

“First of all, the Arts Council continuing to do community outreach and just being involved in the community is just great. The shopping center and EDENS stepping up and saying, Hey, let us be part of it, it just encourages people to come out and see each other and hopefully people can be out safely with each other for the near future,” Freda said.

The mural was designed and painted in June, taking the four artists only a few weeks to complete.

The mural was produced on a section of the Princeton Shopping Center’s courtyard wall between businesses Princeton Mattress and Smith’s Ace Hardware.

“I think everyone kept saying things while we were painting like, We need this now, don’t we? People really responded to the mural,” Walsh said. “It is colorful and talking about joy and we are ready for that. To have four people together who are all artists to create this was so great.”

Completing the mural in stages, Walsh first graphed on the wall the 3D Bring on the Joy letters and the design of large garden flowers, which would be painted in different colors.

“After the drawing, then Melissa, Lisa, Fiona and I all descended with our paints. We picked our flowers and loosely followed the mock up, as far as colors were concerned,” said Evans, artistic director for the Arts Council of Princeton. “When you are working on a mural and you see what needs balance and the colors give balance.”

The shopping center provided the slogan.

“The shopping center really wanted something that said Bring on the Joy. I have already seen it once people get to Lillipies Bakery, especially with kids, they run to mural like a magnet,” Evans said. “I think the positioning is really good. I have seen so many posted pictures already of people standing next to it. When we were painting it people would stop and say, that is great and I love it.”

When the decision was made to move forward with a floral idea for the mural concept, Chinkan, Evans, Kuscin and Walsh wanted to make the mural as impactful as possible.

“When the shopping center told us they were interested in having a mural and we saw the scale of this wall we were so excited. Because they provided the Bring on the Joy for us it was up to us to come up with imaging that felt appropriate for the season,” said Kuscin, who is also the program and marketing manager at the Arts Council of Princeton.

The size of the letters and the flowers are large in scale, which was intentional.

“You will never see a flower this big in real life, but it is all intentional because we want you to feel like you are walking into our garden and it is three dimensional and colorful,” Kuscin said. “All the things you want to feel after so much time spent away from people. We wanted happiness and joy and we are really proud of what we did.”

The artists also want people to feel like they are walking into a moment.

“The way the rest of the elements interact with the lettering, if you look at it you will see some of the greenery popping in and out from behind the letters, which gives it that layered effect and makes it feel really multi-dimensional,” Kuscin said. “The scale of the letters needed to feel dramatic to balance out that really interactive and energetic design. We wanted something that was big and bold.”

The Bring on the Joy mural is the first in a series of three murals that will be displayed through Spring 2022 at the Princeton Shopping Center, which is owned by EDENS, a retail real estate developer, operator and owner.

The Bring on the Joy mural will no longer be painted over for the next murals in the series.

“That is the plan. There was not anything here before and I feel like these days we feel the power that art can bring by really livening up the shopping center,” he said. “Even though we talked about a rotation series of three different murals it would be a shame to paint over this. We have other places that need to be invigorated with this beautiful art and let the artists do their thing.” 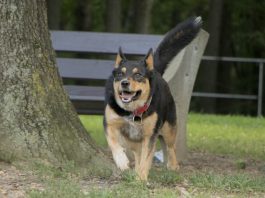