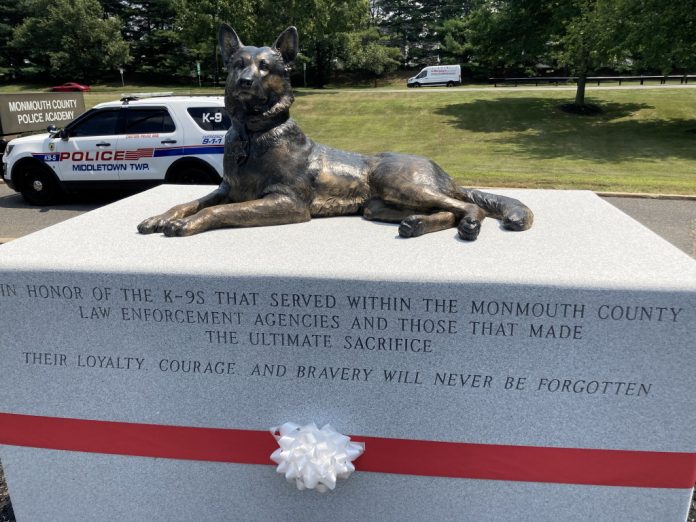 A monument that was conceived by an Eagle Scout to honor fallen K-9 (canine) police dogs has officially been unveiled at the Monmouth County Police Academy on Kozloski Road in Freehold Township.

As part of the requirements to achieve the rank of Eagle Scout, Boy Scout Devin Motani of Troop 101, Marlboro, had to plan and complete a community service project.

For his project, Devin had a monument that honors K-9 police dogs constructed at the Monmouth County Police Academy. The monument features a life-size sculpture of a K-9 police dog, a granite base, a paved area and space for where future fallen K-9 police dogs may be honored.

“The entire goal of this project was to have K-9 officers come back here and pay their respects, whether they died in the line of duty or are still serving,” Devin said. “We want families to come back and memorialize the K-9s.”

A ribbon cutting ceremony was held on July 28 at the police academy.

“What an incredible project this is,” Monmouth County Commissioner Lillian Burry said. “I have had the occasion to be a part of many Eagle Scout projects, but I have never seen anything quite as impressive as this one.

“(Devin) attributes the project to teaching him teamwork, brotherhood and a sense of community,” Burry said. “Isn’t it amazing how he can take something like that, turn around and say how it taught him something? We are really the beneficiaries here in Monmouth County to have this.”

Devin is the son of Riaz Motani, who was a police officer with the Howell Police Department until his recent retirement.

“Since my childhood, I have always had a strong tie to law enforcement,” Devin said. “I was constantly surrounded by law enforcement officials, events, news and more. As I grew older, my appreciation for these beautiful people expanded, which furthered my interests.”

Devin is a member of the Marlboro Police Department Police Explorers, which he joined in 2018, and is the group’s captain.

The Police Explorers program gives young people who are considering careers in law enforcement the opportunity to volunteer in a local police department.

“Throughout my three years in the Police Explorers, I developed into a leader, met a ton of people and learned about a variety of law enforcement career opportunities, which strengthened my love for the law enforcement community,” Devin said.

Devin said he came up with the idea for the K-9 monument in 2019 and described how he wanted to give back to the law enforcement community for his Eagle Scout project.

“I have always been fascinated by the work of police dogs and the dogs’ handlers,” he said. “It is amazing to see the added value these animals bring to the general public, as well as to military and law enforcement agencies around the world.

“Having been a K-9 officer working a patrol narcotics dog for 10 years of my career, you know the benefits of a police dog,” Kudrick said. “To the handlers, the dogs are a loyal partner, a friend. They bring a smile to every young kid’s face, whether it is at a demonstration or on general patrol. The dogs bring a frown to the bad guys’ faces.

“You cannot put a number or a statistic on the presence of a police dog,” the chief continued. “Nowhere will you see a statistic which shows that a person complied (with a police officer’s orders) as a result of the presence of a K-9, but I can assure you that once that door pops, the nonsense stops. Once that dog comes out of the back of the car, people tend to behave.

“American police officers have the most powerful position in the United States. Even the president can’t take a life or take away someone’s civil rights like we can. So we deserve scrutiny. But nobody else understands what these officers go through on an everyday basis.

“Clearing a house by themselves, walking into a wooded area to look for a suspect, the presence of the dog makes the police officer’s job safer, which makes that suspect safer when we don’t have to go hands on with somebody,” Kudrick said.

Kudrick said he attended the police academy and worked alongside Devin’s father in the Howell Police Department and said he has deep connections with the Motani family.

“I have seen Devin grow from a baby to the fine young man he is today,” the chief said. “He put his extended effort of being a Boy Scout and reaching the highest honor as an Eagle Scout, making this (memorial) part of his project for all of us to benefit. Devin is a fine example of recognizing the valuable partnership police K-9s are.”

The Monmouth County Sheriff’s Office has lost one police dog in the line of duty, K-9 Solo (nicknamed Rambo), who was shot and killed while attempting to apprehend an individual in 1998.

A gravestone for Solo was placed outside the police academy in 2018 and is near where Devin’s monument to K-9 officers was constructed.

Devin said his project was influenced by the tribute to Solo when he brought his idea to Sheriff Shaun Golden.

“(Devin) presented a vision to me in my office,” Golden said. “He had pictures and an outline of how he was going to overcome funding (challenges), placement and coordination of the companies involved.”

According to Devin, the monument cost $30,015 to complete. He said the 17,000-pound granite base was transported to Freehold Township from a quarry in Georgia and placed on a concrete foundation constructed by Monmouth County Department of Public Works employees.

Linda Torch, a sculptor with Young Fine Arts Studio in Utah, was selected by Devin to create the impressive life-size sculpture of a police dog that sits atop the monument.

“Devin, I look at you and it puts a very bright feeling in my heart to know we are in a good future in Monmouth County. To take this effort that you just did here, knowing the importance of what Monmouth County is about and what we need, you are a true hero,” Arnone said.

Devin concluded his comments by acknowledging his father.

“For the past 14 or so years, my dad has been right at my side, wearing the (Boy Scout) uniform with me, coming to almost every single weekly meeting and monthly camping trip, on top of his extremely busy work, soccer coach and now golfing schedule,” Devin said.

“When I started to fall off, he has always been there to push me right back on track and is constantly on top of me to get things done. He has introduced me to so many people, taught me so many different things and truly made me into the person I am today.

“His resources, optimistic attitude and drive to help others is unmatched and I just want to thank him for everything he’s done for me,” Devin said.