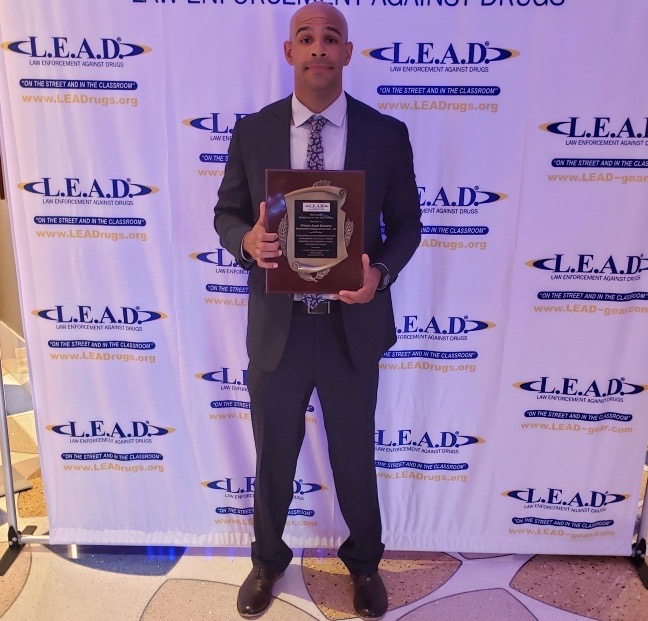 Patrolman Adam Edwards of the Bordentown Township Police Department receives his award for being named New Jersey L.E.A.D. Instructor of the Year on June 29 in Atlantic City.PHOTO COURTESY OF BORDENTOWN TOWNSHIP POLICE DEPARTMENT
×

Patrolman Adam Edwards of the Bordentown Township Police Department receives his award for being named New Jersey L.E.A.D. Instructor of the Year on June 29 in Atlantic City.PHOTO COURTESY OF BORDENTOWN TOWNSHIP POLICE DEPARTMENT

Patrolman Adam Edwards of the Bordentown Township Police Department has enjoyed giving back to the township in which he grew up.

The 2010 Bordentown Regional High School graduate and current Bordentown Township resident has made it his duty to give back and serve the community the best he can ever since he took the oath of office to become a police officer, he said.

For the last four years, Edwards has served as the Bordentown Regional School District school resource officer (SRO), cultivating new programs and building relationships with staff and students to help continue to ensure a safe learning environment for everyone.

Part of Edwards’ duties as SRO is developing a curriculum for third- and sixth-grade students that centers around drugs and alcohol and helping students take the right course of action regarding those substances.

His work this past school year teaching Bordentown students about the dangers substance abuse has led to Edwards receiving the New Jersey Instructor of the Year award by the Law Enforcement Against Drugs and Violence (L.E.A.D.).

“I’m very honored to be recognized for this award,” Edwards said. “It feels great as a Bordentown graduate to give back to the district. For me personally, it’s a huge honor.”

L.E.A.D. is a national nonprofit organization that is committed to protecting children from the risks of drugs and violence. It provides leadership and resources to help law enforcement agencies partner up with educators, community leaders and families to provide effective anti-drug and anti-violence curriculums for students, according to the organization.

In a prepared statement, L.E.A.D. Executive Director and Chief Executive Officer Nick DeMauro said, “We want to congratulate Officer Edwards on his outstanding efforts in implementing the L.E.A.D. program to benefit his community and state. He did a tremendous job on enlightening students in Bordentown on the dangers of drugs and violence, which we commend him on.”

The 10-week program that Edward implemented was based on the curriculum L.E.A.D. has constructed to educate the youth on making smart choices that don’t involve alcohol or drugs.

While teaching the program this past school year, Edwards said the students responded “very well” to the activities and teachings he implemented, even adding that he was “totally” in awe of how much the kids already knew on the matter.

Edwards has participated in many different programs across the five schools in the district since his tenure as SRO began.

Last fall, Edwards teamed up with high school counselor Amy Rabenda to create a group called Student Voices, providing a space for high school students to speak about issues going around in the world and how they are affecting them.

The group held an eight-part series on topics revolving around racial and social injustice in honor of Black History Month in February.

Edwards hopes to add more programs in the school district over the course of the next few years that center around the coronavirus pandemic, saying that he understands the pandemic has affected many students in different ways.

“There is still a lot of work to do, especially with the pandemic,” he said.

Being an SRO is something Edwards truly enjoys, he said. It’s a position he takes a lot of pride in and adds it is a “big honor” to be recognized as L.E.A.D. Instructor of the Year for helping give back to the school district and community he grew up in.

“To be recognized is pretty special,” Edwards said. “I strive to help out the community in the best way I can.”