Father and son go ‘Phishing’ on beach in Atlantic City 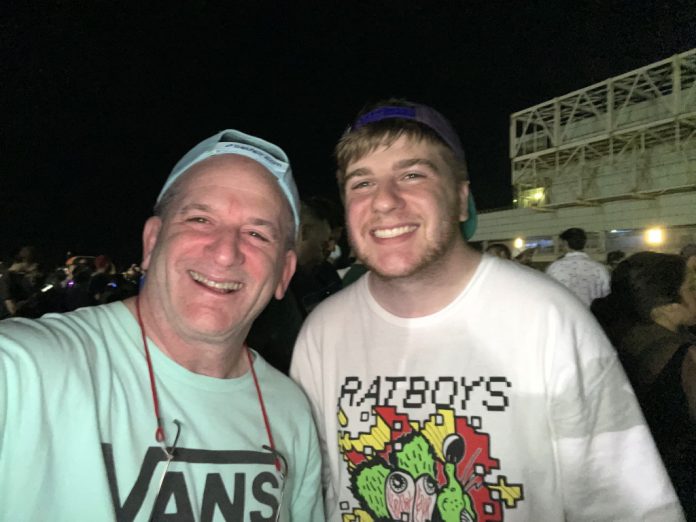 So there I was at noon on Aug. 14, sitting in my man cave and thinking about the exciting Saturday night I had planned. I would watch the newest Hallmark rom-com, text (bother) a couple of friends and nosh on Yodels and Twizzlers.

Going phishing was the farthest thing from my mind. I knew I would have the house to myself that evening because my son, Nate, had plans to go to see Phish, which (who?) was playing the second night of a three-night stand on the beach in Atlantic City.

At that moment, Nate walked in and said the friend he was supposed to attend the concert with had fallen ill the night before and would not be able to make the show. Alarm bells started going off in my head, but I played it cool as I suggested that he call around to see if he could find another friend to go with him.

But the friends he called had other engagements for the evening and at that moment I knew I was about to be asked a question I did not want to hear.

“Will you go with me so I don’t have to go alone?”

Now the odds of me ever choosing of my own free will to attend a Phish concert to see a band that is best known for 20-minute jams that feature noodling on guitar and keyboards were none and none. Two verses, a bridge, three minutes, get in and get out. That’s a song.

But what are you going to say when your 26-year-old son asks you to go with him to a concert he has been waiting months to see? Would you make him go alone and stand on a beach with 30,000 people he does not know?

Deep down, I knew I could not say no because life is precious and short and Nate and I don’t get to go to that many places together anymore.

So I said yes, because life always provides adventures and for 39 years it has also provided newspaper columns.

With that said, by 6:30 p.m. on a warm summer night, I found myself standing on the beach in Atlantic City waiting to see Phish, a four-man band whose greatest claim to fame, in my opinion, was playing the Velvet Underground album “Loaded” in its entirety on Halloween 1998 in Las Vegas.

We staked out a spot on the beach (no chairs) and waited for the band to take the stage. I found myself standing next to a gentleman of about my age who told me he was attending his 100th Phish concert that evening; an impressive, if not shocking, feat of stamina, as it turned out. He was thrilled to hear I was seeing the band for the first time and promised me it would be something I would never forget. Well, yes.

At 8 p.m., Phish began to play. I will only say this is not the type of music I generally listen to, but I am in no position to judge what tens of thousands of people were so clearly enjoying.

To be fair, the musicianship was tight and the sound system was outstanding. People were in good spirits, there were no knuckleheads around me, and the fans were appreciative of the band’s performance.

After the first set ended we caught our breath. I took a knee for several minutes (I was stiff from standing all that time, although several caring young people around me asked me if I was OK; I assured them that having survived numerous Twisted Sister performances in various New Jersey rock clubs, it was going to take more than a mellow jam band to finish me off).

The second set kicked off at 10 p.m. and gave us I Never Needed You Like This Before, Drowned (Who cover), Ghost, Scents and Subtle Sounds, Chalk Dust Torture, No Quarter (Led Zeppelin cover), Slave to the Traffic Light and Suzy Greenberg.

A two-song encore saw the band offer A Life Beyond The Dream and Tweezer Reprise.

And just like that, at 11:30 p.m., it was over. The first and only Phish concert I will ever attend had ended.

We made our way off the beach, to the parking garage at Caesar’s, reached the car, exited Atlantic City and in slightly more than 90 minutes (2:15 a.m. for those of you keeping score) we were home. My great phishing adventure was over.

Nothing gives me greater pleasure than seeing my only child happy. Please do not tell anyone I was possibly, maybe, secretly hoping that when he found out his friend could not go with him to see Phish that I would be his next best option. He may think I also want to see Dead and Company, which I really, really, really, mostly, do not want to see.

Mark Rosman is a managing editor with Newspaper Media Group. He may be reached at news@njexaminer.com