JACKSON – The Township Council has authorized Jackson’s participation in and acceptance of a $273,092 grant from New Jersey’s body-worn camera grant Program.

Township Council President Andrew Kern was absent from the meeting, but subsequently told the Tri-Town News, “I support the use of body-worn cameras because they can be a useful training tool.

“Used correctly, the cameras show the complete interaction (between a police officer and other individuals). They provide context about what led to an incident and they protect the innocent.

“Because the state mandated body-worn cameras in 2020 for all officers in New Jersey, I agree the state should provide grants for their purchase,” Kern said.

He said grants such as the one the council accepted for the body-worn cameras are why council members passed a resolution instructing the township to hire a grant responding service.

“I believe the former Attorney General was wrong to prohibit officers from reviewing body camera footage prior to preparing initial reports. There is no logical reason for this portion of the policy if the goal is accuracy and the truth,” Kern said.

In November 2020, Gov. Phil Murphy signed two pieces of legislation (S-1163 and A-4312) into law which concern the use of body worn cameras by members of law enforcement, according to a press release from Murphy’s office.

Exceptions are permitted for officers who are engaged in undercover assignments, meeting with confidential informants, performing administrative or non-uniformed duties, and when directed by a superior officer for a lawful purpose.

A-4312 regulates the use of body-worn cameras by law enforcement officers. Under the law, officers are required to keep the camera activated when responding to a call for service or when initiating a law enforcement or investigative encounter.

When immediate activation of the camera is impossible or dangerous, an officer is required to activate the camera at the first reasonable opportunity to do so. Officers are required to notify subjects the camera is activated and, under certain conditions, may deactivate a camera upon the subject’s request.

To protect the privacy of civilians in sensitive situations, the bill limits the use of body-worn cameras while officers are on school property, in medical facilities, and in houses of worship, according to the press release.

“We have made it clear New Jersey will be second-to-none in enacting vital reforms to promote transparency and boost public confidence in law enforcement,” Murphy said.

“Body worn cameras are a wise all-around investment in public safety that not only redouble our commitment to transparency and accountability, but also ensure that members of law enforcement are equipped with an important tool to help them carry out their sworn duties.

“Today represents another step down what we know is a long road to full understanding and lasting trust between law enforcement and the communities they serve,” he said.

“The statewide implementation of body-worn cameras represents an important step in strengthening the bonds of trust between police departments and communities while fostering greater transparency and accountability,” said Col. Patrick J. Callahan, superintendent of the New Jersey State Police.

“The New Jersey State Police has learned that recording interactions with the public from patrol vehicles for the last two decades has been a valuable asset in protecting both our citizens and our troopers alike. The addition of body-worn camera technology is yet another layer of protection for our men and women in law enforcement and the communities they serve,” Callahan said.

“This (law) will ensure transparency for the public and our law enforcement members,” said Pat Colligan, president, New Jersey State Police Benevolent Association. “It will enhance officer safety and help us continue the extraordinarily high level of service we continue to provide the residents of our state.” 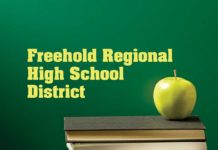