Twenty years later, We will never forget: Edison officials call for ‘spirit of cooperation and generosity’ after Sept. 11 terrorist attacks 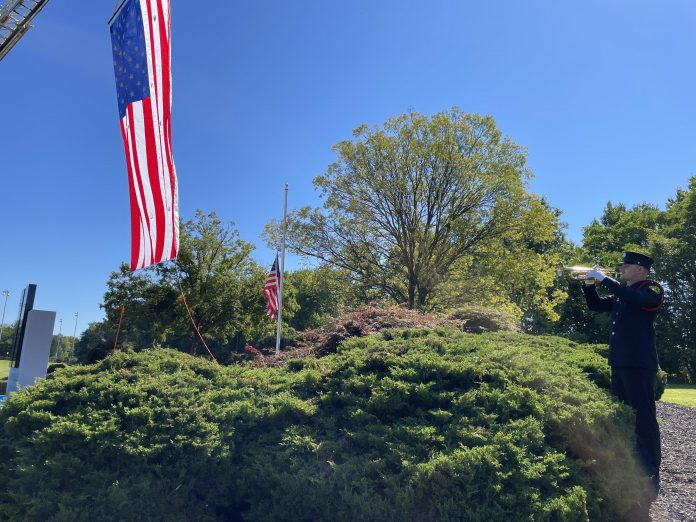 EDISON – Officials called for the “spirit of cooperation and generosity” in the days, weeks and months after the terrorist attacks of Sept. 11, 2001 as they reflect on the 20th anniversary.

The “spirit of cooperation and generosity” was evident with the building of the 9/11 Memorial Fountain at Papaianni Park in the year after the attacks.

“We were not Republicans or Democrats, we were not one side of an issue or another side, we were all together, we were residents who worked in town, we were Americans, all of us,” recalled Council President Robert Diehl at Edison’s 20th anniversary Sept. 11 remembrance ceremony at Papaianni Park’s 9/11 Memorial Fountain on Sept. 11.

In his remarks he noted the families of Cohen and Schertzer were at the ceremony.

“We united in our grief for those killed and for the loved ones who were left behind,” he said.

Councilman Richard Brescher said he wanted people to remember and continue to remember what happened the day after the attacks: the unity of people coming together.

Police Chief Thomas Bryan said the “outpouring of love and unity is so very important.”

“Like Councilman Brescher said, let’s try to get back to that and not forget that,” he said.

This year marks 20 years since the attacks, which killed close to 3,000 people when four passenger airliner planes were hijacked by al-Queda, an Islamic terrorist group. Two planes slammed into the World Trade Center buildings in New York City and one plane hit the Pentagon building in Washington D.C. Another hijacked plane, Flight 93, was thwarted by passengers and crashed in a field near Shanksville, Pennsylvania.

Mayor Thomas Lankey said with a generation in the schools who weren’t alive during the attacks, it’s important to continue to talk about those who lost their lives on Sept. 11, 2001, so “everyone remembers and consciously understands the impact” and to “never, ever forget.”

During the ceremony, dignitaries shared their remarks, JPS students sang the national anthem and “America the Beautiful”; Boy Scout Troop 66 led the crowd in the Pledge of Allegiance; and Bishop Nikolaos G. Brown of Ignite Church in Fords led the invocation and benediction.

Gloria Dittman, president of the Edison Arts Society, read a poem “As I Sit in Heaven.”

The Edison Police Honor Guard and members of the Edison Fire Department stood in honor.

After officials read the names of township residents who died on 9/11, a member of the Edison Police Honor Guard played “Taps” on the trumpet.